We work buildings as volumes, as three dimensional topographies, as ‘communicating rooms’. The relation between one space and another gains its charge from the negotiation between the two – the result of the interaction of larger forces. These could be the meeting of the public space and interior, of existing and new construction, of durable and ephemeral.
The sections of these four buildings (all presented at 1:10) are revealing for the way in which they demonstrate the spatial and material impact of these larger negotiations on the constructed fabric. This is not something which we have developed deliberately through the medium of the section; however the section allows us to ‘take stock’ of the design in a particular way. Contractors tend to work mostly from plan – which is logical because you start at the bottom and work up (from drainage to foundations through the storeys to the roof – each has its plan). This dictates (at least in part) the means by which the architect’s detailed construction studies are organised. Yet in the section the chronology of the construction process is flattened, allowing us to communicate something closer to the overall intention of the project, in addition to the pragmatic aspects of demonstrating how the building will be made warm and dry – in other words, habitable.
These sections display a certain recurring attitude towards ‘hollow walls’: deep thresholds which invite you to spend time in the space ‘inbetween’: between an East End street and Amnesty’s campaign office, between a public courtyard in Gistel, Flanders, and the apartment of an elderly resident, between a small meeting room and the open interior of the Arts Council’s offices, between the inhabited ruin of Astley Castle and the landscape beyond. The presence of these deep negotiated boundaries in the designs is also perhaps telling of an attitude towards construction which differentiates between masonry (hard, resistant, resonant, durable) and carpentry (soft, smooth, acoustically absorbent, warm), or between wall and lining. In each project the former creates the stable conditions for the latter: the durable is overlaid with the ephemeral, structure is overlaid with inhabitation. These two ‘registers’ of the project are particularly clear in section: heavy elements follow the logic established by their inherent material qualities, forming simple shells, whereas lighter elements are employed to shape the spaces which are finally perceived, to welcome the inhabitant into the architecture.

Amnesty International UK set an ambitious brief to create a ‘home for human rights’, a new headquarters that would bring 170 staff together under one roof to foster greater communication and engagement both with, and within the organisation. The project expands on ideas explored in a number of earlier works: how through the structure and character of spaces architecture can underpin communication; and how intervention in the interstitial spaces of existing buildings can maintain their assets while adding new strengths. The addition of a single storey volume along the street establishes a new level of visibility and accessibility for the organisation. It forms the beginning of a circuit of rooms through the ground floor devoted to training and co-ordination of activists and educational work. These rooms benefit respectively from their proximity to, and distance from, the street; they offer both engagement and reflective distance, the two poles of this campaigning organisation’s culture.

The Herberg Godelieve, a 17th century inn building, sits in a pivotal location in the urban fabric of Gistel. It is located on a route across the town, which has gained importance with the spread of development from the original strip; it also offers access to a large site on the interior of the urban block. Our project realises a strip of housing close to the site boundaries. This achieves three interdependent spatial relationships: the new public space is kept as open as possible to the main street, forming a forecourt for the housing; the long, low ‘herberg’ is respected, maintaining the value of this remnant of another time and another landscape; the public space is surrounded by uses – a healthy principle which supports the liveliness and safety of the public realm. The public space is neither garden nor formal square, rather an urban courtyard with a sober but informal unity, shared between the cafe terrace and the residents of the social housing whose communal, timber-lined balcony overlooks this external room.

Our project takes its cue from the mixed scale and dense grain of passages and streets in Manchester’s Northern Quarter. The ground floor is a fluid public space shaped by a series of masonry houses, linking the entrance and the staff café: its walls and windows display prints and sculptor’s maquettes from the Arts Council collection. The ‘houses’ – in cool, large calcium silicate blocks on the outside – contain intimate, focused meeting rooms, lined in douglas fir panelling, stained to a range of colours. The office areas, on the upper floors, are arranged as a series of interlocking rooms divided by deep partitions in fine joinery. Our fit out design for this passively ventilated office shell makes a significant contribution to support the diverse work of the Arts Council England. The porous relationship between the characterful spaces and creative activities of the Northern Quarter and the ground floor meeting rooms and shared spaces of the Arts Council England is mutually reinforcing of the area’s diverse public culture.

Astley is a remote site with rich historic resonance: a moated castle, lake, church and the ghost of pleasure gardens. After decades of decline, the project salvages the ruins of the castle, binding them into a vivid new house for the Landmark Trust. Our design engages directly with the accumulation of historic structures, building the new house within and on top of the oldest part of the castle, and retaining wings from the fifteenth and seventeenth centuries as walled external courts. The structure of the new house ties, buttresses and weathers the retained ruins. The gaping openings in the walls created by decay are kept as large windows, keeping the open character of the ruin rather than attempting to recreate its completeness. The house within is luminous, animated by sunlight on stone walls and views over the ancient landscape. At the dining table, you look out from twelfth and twentieth century construction to fifteenth and seventeenth century walls – the dialogue across the centuries frames conversations between friends. 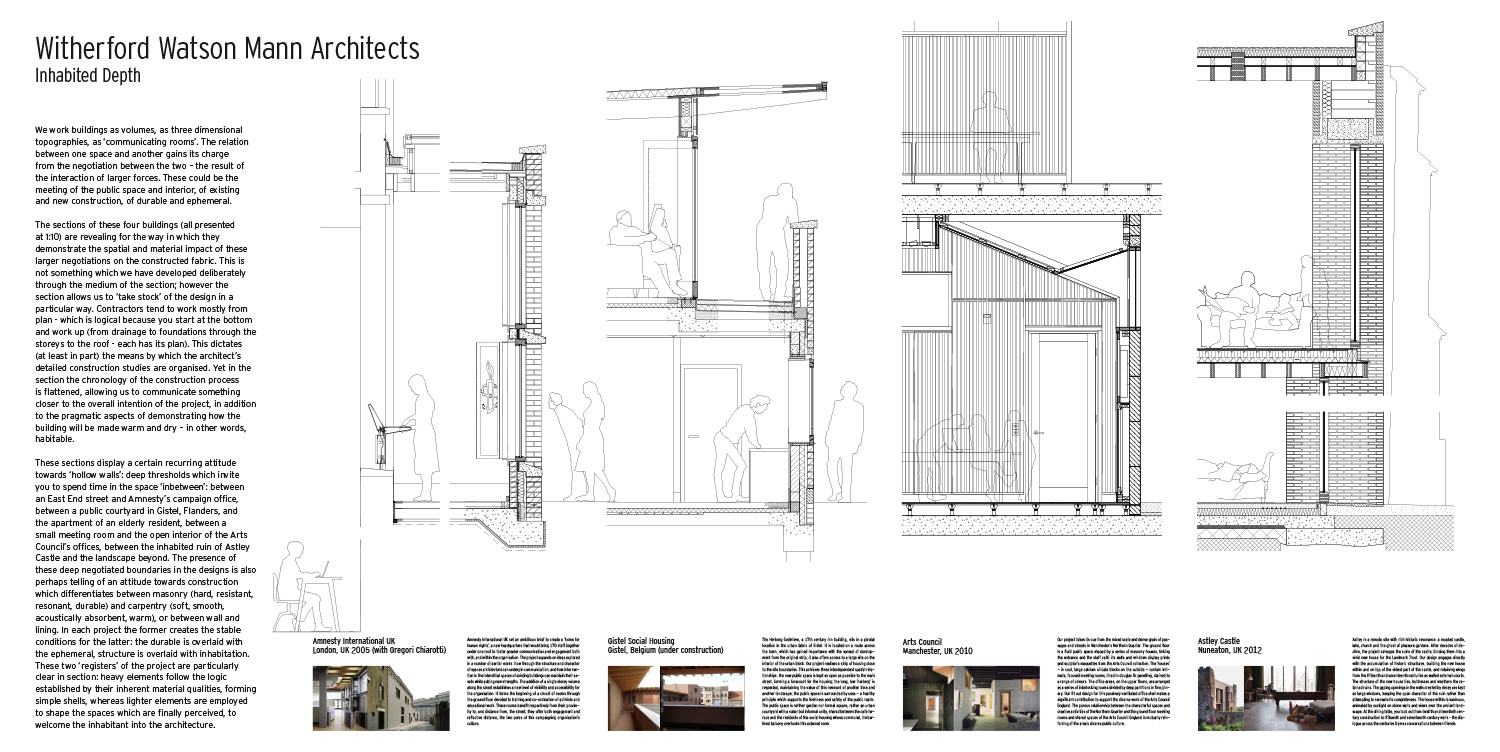