Wiel Arets Architects – The detail and the legislation

Architecture may be considered a desire for purity, a striving for perfection. The principal color white marks a process in which the undecidable is respected; it is not a question of meaningful or meaningless. The whiteness of newly fallen snow in the morning light, the white of a perfect skin, the white of paper on which the design will be sketched–white is everywhere and may be considered the color of origin and beginning. White is the color of the between: between conception and execution, between unblemished and defiled, between innocence and seduction, between virginity and marriage.
Architecture is unblemished. Its entire logic risks something that is of only short duration. It appears only to disappear. It seduces through innocence, yet it loses that very innocence through seduction. It presents us briefly with freshness and untaintedness, only to lose those properties precisely by offering them to us.
Architecture is therefore a between, a membrane, an alabaster skin, at once opaque and transparent, meaningful and meaningless, real and unreal. To become itself, architecture must lose its innocence; it must accept a violent transgression. It can only become part of the world by entering into marriage with its surroundings. Therefore architecture is not only untainted but violent, and its violence once again has two sides. On one side architecture is violent because it resists having to be the victim of its surroundings; on the other it can distort those surroundings. This relationship lends it cunning.
Those who engage in architecture should keep their wits about them. This applies first to architects. Archi- tecture bestows upon us not the pleasure but the fear of freedom. If we are to prosper, we must learn to see through its ambiguities and find a way of coping with its vagaries, for it inflicts incisions everywhere. Architecture cuts through the skin of the city; as an image, it graves images; itself defiled, it defiles others. However, we should not be intimidated by this. Too often it cuts itself, and seldom does it intend to cut off our retreat. It is more likely to cut to make something visible. It makes incisions to make life more comprehensible. Architecture and its surgical interventions parallels biology as a science representing life.

This school is located in a housing district on the edge of Utrecht named Leidsche Rijn. It is comprised of both an educational and vocational school, and the entire campus is divided into four wings that extend to the outer edges of its site. The campus is wrapped around a central volume that contains a shared library, café, and cultural center. This cavernous central volume was created with a steel and concrete structure that carries four large roof beams, whose floors are suspended in a number of ‘zero-zero’ levels.

These four housing towers are located in Osdorp, a leafy post-war neighborhood on the southern edge of Amsterdam; it is an area of the city characterized by expansive green space, mature vegetation, and numerous tram and metro connections to ensure its swift accessibility to the city center. The towers, in accordance with their surroundings, seek to blend into their context. They are situated within a newly built park; in this way, their glazed ground floor lobbies overlook only green. A new waterway and multiple new islands separate the towers from a nearby canal. A pathway winds through this string of islands, each connected to the other by newly built bridges.

This building is an office for Schwäbisch Media (Swabian Media), a publishing company active in many facets of traditional and new media. Six protruding glass-walled cubes define and compose the project, with their proportions and dimensions based on the surrounding traditional German fachwerk villas in the city of Ravensburg. These six working areas have been stacked on top of a transparent ground floor, through which access is afforded to each, creating a new urban typology in the center of this medieval city. As the company’s activities were previously scattered throughout the Upper Swabia region, this building brings all 350 employees under one roof.

The B’ Tower, located in the center of Rotterdam, is composed of three distinct volumes of retail and residential program, and is a contiguous extension of Marcel Breuer’s 1955 ‘Bijkenkorf’ department store. Standing at a height of 70 m, its plinth encompasses retail while its subsequent volumes are composed of 54 studios and 24 apartments, respectively. The city of Rotterdam mandated in the mid-1990s that a portion of newly built structures in its center incorporate housing; intrinsically, the B’ Tower is one of the first of these buildings, seeking to impart and sustain an urban vibrancy within this rapidly restructuring district. 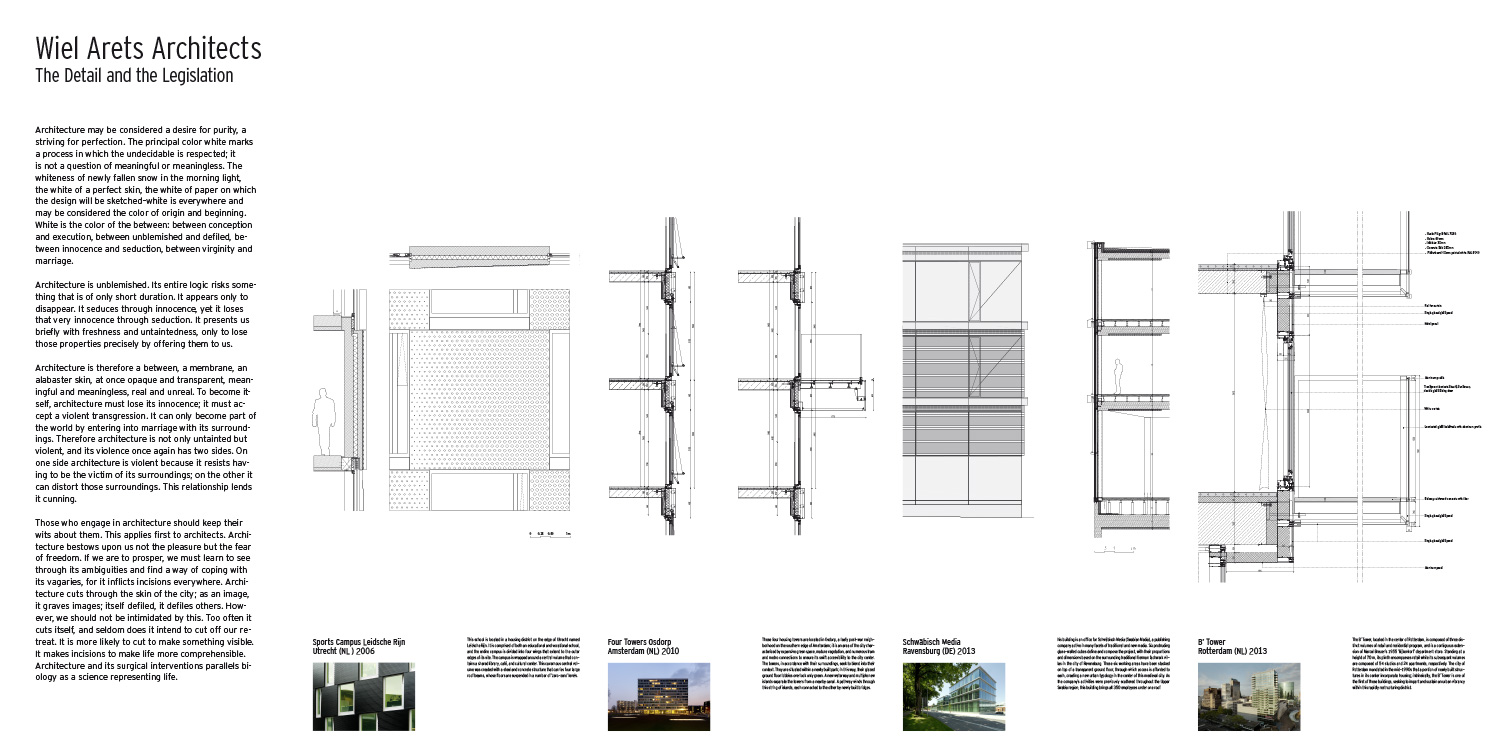