The materials, which I may use, are concrete, steel or wood. I begin with the choice of material. For instance, I cannot use brick in Japan, because of earthquakes. Or, if I want to have wide spans, wood is not an ideal solution. So, when I consider possible mate-rials to be used for the structure of my buildings, I often pick up concrete, steel or a combination of these two.
The problem of structure is important. I think about it together with the structural engineer, almost from the beginning of the design process, immediately after I produce the first images or drawings. In the case of the Tama Library the suggestion from the structural engineer was important. But all the time, I have been thinking about how I can build an arch, which is as light as possible and does not feel and look heavy like a traditional arch from the past. When I told this to the engineers, they suggested to have a structure made of a steel core and concrete on the two outer sides.
I often do not decide exactly what the material itself must be right from the beginning. This issue is especially connected to contemporary development of structure analysis, I think. For example, the Tama Art University Library features a structure made of a steel core sandwiched between two layers of concrete. We came to opt for this structural system as more economical, in this case, that that of the Ginza Mikimoto Bulding, previously completed, where the structural layers are reversed.
When you use aluminium as structure, there are certain limits concerning the maximum size of what you can build. It is a strong material indeed, and, of course, you can use it for structural elements, e.g. columns and walls, or, for instance, for the sash of a window. Or when, in a project of ours, we erected the structural columns, they were built together with the window frames, in one go. You can pursue a high accuracy when using aluminium.
This relationship between structure and design keeps changing with the aid of computer, but the main issue we face is execution (construction). The critical point is that, no matter what you design, you have in the end to be able to build it. For instance, in the case of the Crematorium in Kakamigahara, we needed a craftsman, a maestro to pour the in situ concrete, without whom the building would have not be possible.
Marco Pogacnik and Toyo Ito in conversation.
19 march 2013. The day after Toyo Ito San was awarded with the Pritzker Prize

This funeral hall is situated in a quiet and picturesque landscape , on the shore of a lake surrounded by wooded hills. The roof is supported by columns that taper down and merges with them. The walls on the back and tapered columns with recessed gutter support the complex with an effect of great lightness. The building is divided into three blocks. The first contains the south-facing rooms intended for the cremation and runs on two floors with a private access. A second block is placed next square and is enclosed by walls covered with marble ; It contains offices and ceremonial spaces. The third block, set on a slender arm that follows the shore of the lake, contains banquet facilities. These internal functional areas, enclosed in separate blocks are surrounded by circulation spaces with seating and the whole is surrounded by the perimeter wall of glass dominated by the flowing lines of the roof.

Situated close to another house Ito built for the same client 25 years earlier, the present structure was originally planned in reinforced concrete. In the context of a research project, it was later reworked with an aluminium skeleton frame. The system is based on a 3.6 x 3.60 m column grid (1.80 m at the edges). A stabilizing cruciform core in the columns helped to achieve an unusually small cross-section (70/70 mm) and a structure of slender appearance. Horizontal bracing is provided by the extruded T-section beams laid at 300 mm centres over the columns. Externally, the house is clad in aluminium sheeting, which is contrasted with the warm wood tones of the furnishing, doors and flooring internally.

Sendai Mediatheque has an extremely unique structure. It is composed of six 15 3/4” floor slabs held in place by 13 shafts made up of latticed tube steel columns that rise from the ground through the roof. The four columns at the corners are cantilevered to resist not only vertical loads, but also horizontal loads introduced by wind and earthquakes. But these shafts are more than structural. Each shaft varies in size and house Sendai Mediatheque’s utilities, technological systems and vertical circulation including both elevators and stairs. Each of the thirteen shafts are independent of the facade and allow for its free form plan while simultaneously showing how light and transparent the structure really is.

The vertical load-bearing elements were initially conceived as ‘trees made of thin metal mesh’. The intent of the meshes was to dissolve the traditional notions of a column and make it instead a space itself. The meshes had to be transformed instead into bundles of thick steel tubes in order to satisfy the shear, seismic, lateral, and gravity loads of the building structure. Within these structural parameters, though, the tree mesh concept largely determined the final design of the bundles and tubes. Conceived as spaces themselves, the bundles of tubes are appropriately highly programmatic. The four corner bundles contain elevators and stairs. In addition, mechanical systems such as air conditioning, water supply, sewage, drainage, electricity, communication cables, and dumbwaiters all extend through these sheaves of tubes. 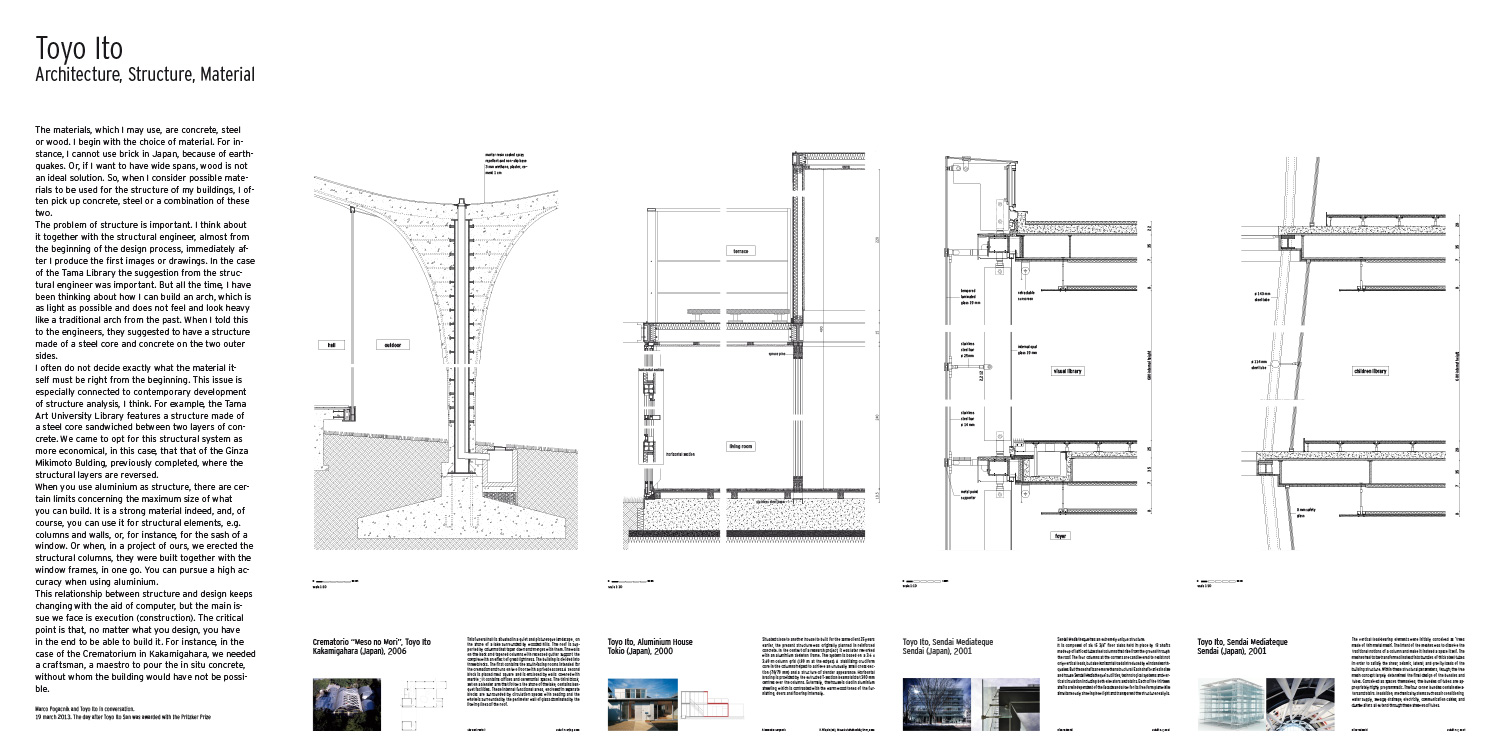