The use of precast concrete as structure and skin

The prefabrication process in the building sector, initially applied only to industrial constructions, has been later used in almost every building. The design aspect in prefabrication has become progressively more fascinating since it includes technological choices as well as the layout of production facilities.
The prefabrication options range from floor slab panels to any other building element such as pillars, plinths and infill panels, as well as to a whole prefabricated system assembled on site.
In France large panels have been patented and extensively used in the construction of low cost prefabricated housing; nowadays, due to a more sophisticated product control, the idea about prefabricated elements has changed, it does not indicate any longer a dull and monotonous repetition of the same components but rather the possibility to use unique elements with variations, without significantly effecting the budget.
Remarkable multi-storey buildings have been realized, mostly for offices and retail; the prefabricated system is based on a variety of compatible components, ranging from plinth to shaft, high monolithic pillar, girder, ribbed slab or infill panels that become the building skin. With technological development, the prefabricated system evolves from the first rough panels “for boxes” to refined components that qualify architecture; today the reinforced concrete infill panel is utilised not only in prefabricated buildings, like the single or multi-storey industrial ones, but also as cladding for structures built in situ, thus perfectly integrating with the built organism.

The exterior utilizes pre-cast concrete panels that wrap evenly around the cornice and corners. The corner elements are specially designed to be perfectly right-angled facilitating the trasformation from roof to terrace. Unlike standard drainages system, the architects utilize a pre-cast concrete panel carefully designed to lie in the same plane as the cladding so as not to interrupt the homogenous facade. the cladding strategy undoubtedly creates a clean uniform overall aesthetic. The 300 mm floors and cellings are cast on the site, the beams transfer the loads to the two structural corea and thr load-bearing facades. The depth of the floor plates in conjunction with the expanded glass granule acoustic panels influence the acoustics favourably. Just as the building gives away few clues as to its contents, the cladding similarly axplois concealed channel and bolt fixing technology giving little indications as its construction and assembly. This gives the cladding a floating aesthetic, with the homogenous facade being the focus of the project, the railing and drainage were designed to be relatively submissive.

The design for the Metzo College facilitates the school’s innovative approach to vocal education. The building’s compact design maximizes flexibility, allows for a relatively small faced surface and enables efficient use of space. The complex is characterised by its pyramid shape and hanging roof garden in the central void. A partition-free layout with few walls reflects the school’s philosophy of openness and transparency. All building is structured in a multifunctional rooms. There is also a gym inside, which is designed as a black-box with no daylight requirements.

Situated in an industrial zone on Munich’s north side, the building hosts production and office spaces for “Textilmacher”, a company for textile print and embroidery. Its iconic feature is the geometrically folded facade, which deforms the simple cubature by an animated play of light and shadow. The matt bright surface of the anthracite pigmented concrete responds to its environment. depending on the season, time of day, weather, and light incidence, the facade continuously changes its character.
Prefabrication, a short construction period, and financial benefits led to the selection of a concrete facade with core insulation. All together only four different formworks were built. The challenges in producing the panels were the seamless, sharp-edged concrete envelope and the free of pores surface.
Measuring up to 6.6 x 3.9 m, the modules, with outer shell, insulation, and structure shell, were built in the factory and delivered one by one to the construction site. The mounting sequences were carefully planned, allowing the elements to be fitted one in another like a puzzle.

This building, designed by architect Richard Meier, was commissioned by Italcementi in Bergamo, Italy. Once again, Meier comes with his
“Architecture in white” a velvety white that reflects light and at same time seems to absorb a part of it, giving lightness even to the heavier and compact structure. The use of fair-faced white precast concrete adds a further architectural value to the project, ensuring greater durability and enriching with sensational combinations of spaces and geometries that seem to dematerialize into a game of light and shadow. The structural design must be adapted to the architectural concept designed by the architect whom provides swings up to 18 meters with consequent uneven loads. The large shell shaped coverage which plays an important role in the solar radiation on transparent facades, is one of the most interesting architectural elements. The coverage is composed by big white precast concrete elements. 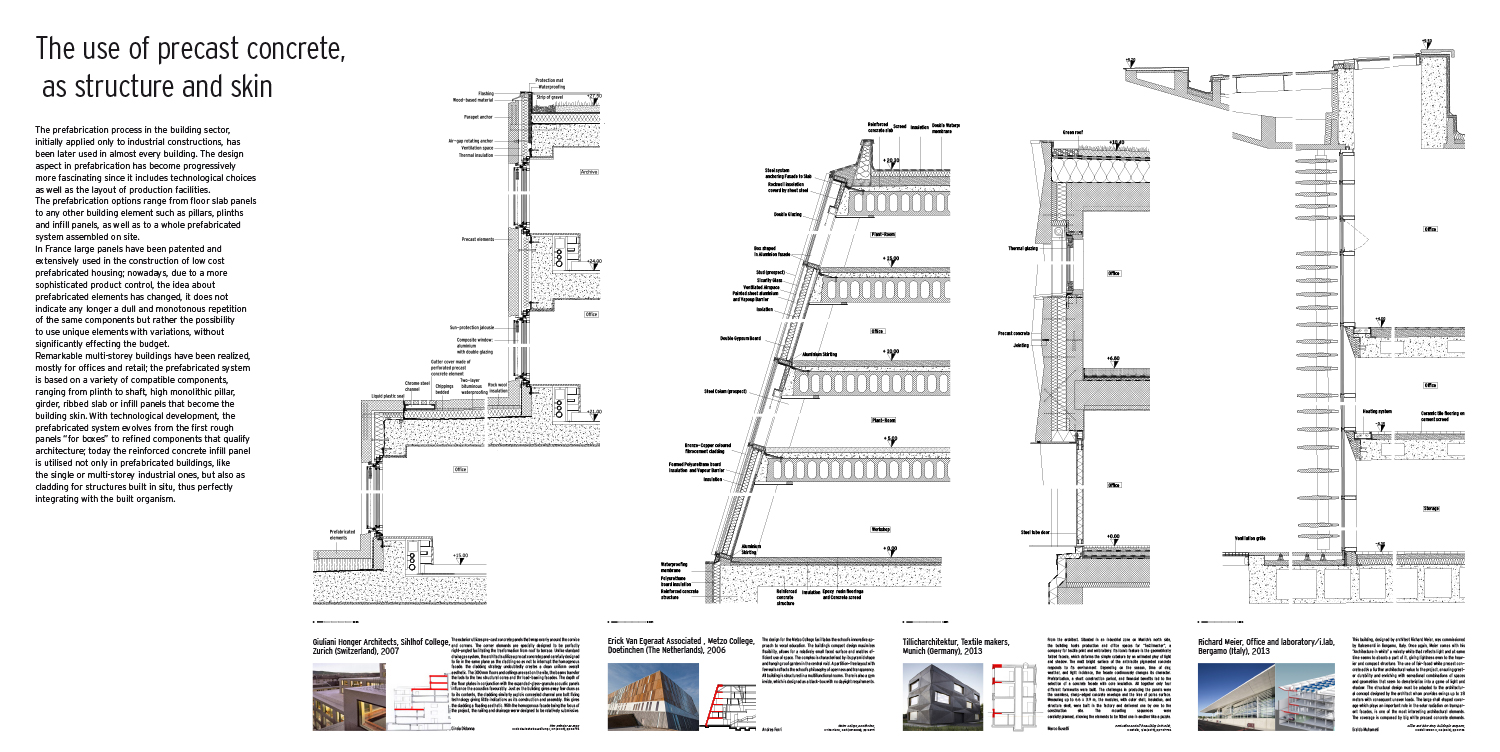