The design of the base, the positions of string courses, the handling of the building corner, the crowning cornice are all elements that structure our perception of a building. “Man sees architecture with his eyes that are 170 cm from the ground.” We cannot consider other aims than those which can be made concrete in images and these images should materialize in a specific place and under a true sky. Traditional design composition and proportioning rules have lost their founding value in the course of the 20th century. The facade, intended as the main plane defining the location of the building in relation to the observer, has been gradually missed. Well before the development of parametric design, the introduction of complex geometries such as paraboloids, induced Xenakis to see in the Philips Pavilion the ensign of a new kind of architecture. No longer volumes shaped by intersecting planes but rather the proliferation of logarithmic functions. However the building silhouette, the line separating it from the emptiness of the sky, remains a compositional theme that human eye can hardly relinquish. The architecture of the late 20th century provides us with an extensive evidence of this. From the Greek design of the cornice crowning Farnsworth House to the buildings of Elwood where an I-beam is used as crowning cornice, building base and pillar, thus forming a frame which is unconcerned with the old rules of a building having top, bottom, front and rear. The roof slope does not emerge on the facade, not even in the contracted form of rain gutter; the plasticity of the cornice becomes the void between the two wings of the I-beam. The non-tectonic choice of Elwood becomes a barbarism confirmed by the crude corner solution. The elegant, mannerist cornice by Vacchini, located 20 meters above the ground, as well as the original frieze by Herzog & de Meuron are – next to no-detail – other possible variations of a theme full of unpredictable developments.

The Farnsworth House is one of the most significant project of Ludwig Mies van der Rohe. Equal in importance to monuments, this house is perhaps the fullest expression of modernist ideals and it embodies the aesthetic culmination in architect’s experiment with this type of building. Every physical element has been distilled to its irreducible essence and objects have been virtually abolished in a puritanical vision of simplified result of thirty years of work. The house represents the ultimate refinement of architect’s minimalist expression of structure and space, raised above the ground, is composed of three strong, horizontal steel forms – terrace, floor and roof – attached to attenuated, steel flange columns. The building is enclosed by great panes of glass that redefine character of the boundary between shelter and that which is outside.

The house, which is near Los Angeles, is intended for a family of five. The bedrooms, bathrooms and areas of greatest privacy are set away from the entrance along the west wall. The generous living areas are arranged on the other three sides. Flanking one side is a swimming pool and a garage. But this is subordinate to the house; it is sunken. The house itself is a study in symmetry and formal geometry. The plan is four square. It is divided into nine lesser squares, each made up of eight modules of 3ft 4in, with the centre one left open as an atrium. Stairways from the garden, placed in the centre of each of the facades, like that in the main entrance facade, serve to emphasize this focus on the void that lies at the centre. Absolutely, the architecture has been contrived to skirt and flank and hover above the nature that is around it.

The aim of Macconi project, that is a commercial building, is particularly concentrated in the pursuit of formal definition of the elements in view that make visible the outer steel frame. They are visible in addition to the closures themselves, also the structures as key elements of the overall architectural design. Together, closures and structures, implement a dimensional warp articulated by horizontal and vertical lines that reveal (as aesthetic qualification) the technical implications of the production and assembly of each component. The technical knowledge become “the mean that makes possible the formation of the project idea.” The technique becomes the element that structures the creative act.

The building in Laufen has a very specific function: storing Ricola’s herbal pastilles. Herzog & de Meuron made a building envelope for the large metal storage container to protect the pastilles from the substantial variations in temperature in the Swiss Jura. The architecture is a large and simple rectangular volume placed next to a rock formation, the building is a remnant of an old quarry. Their approach, our perception changed and the building is revealed layered in many parts, with every element structurally placed and following their attribute as industrial elements. Close inspection continued to instigate human senses and the structural weaving of wood planks progressed in proportion from bottom to top, emphasizing the idea of visual compression. 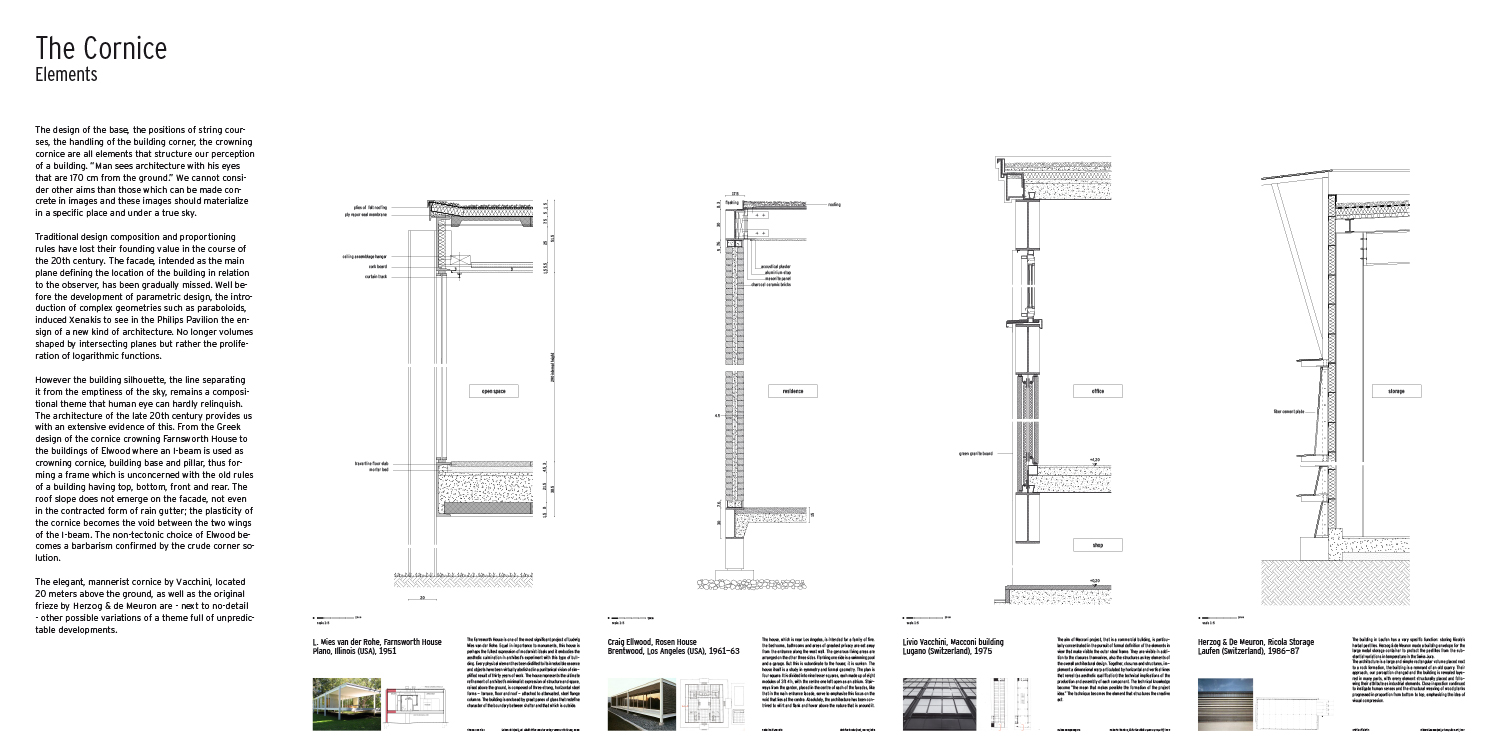