The building detail does not prefer one construction system or another: It express all of them by developing their own peculiarities. Within this board are presented four exterior wall situations that differ from one another: curtain wall, steel frame with HPL cladding, concrete wall with brick and stone cladding, monolithic wall with prefabricated concrete panels. Some of them pursue structural expression and others celebrate cladding; some deal with depth and others with surface; some are layered and others have a single material, some are light and others are heavy. All of them are coherent with specific strategies of material expression that dialogue with the individual context of each building. There is not a general principle in this approach to construction: each project develops its own materiality. Formal and spatial articulation, though, do not exist outside of construction.
The detail does not choose one architectural language or another: It articulates all of them in the relations of the parts to the whole of a building. In this regards, the detail does not exist in a realm that is separate from the general design concept. The material is visible but its visibility disappears within the whole of a building. The detail articulates the relationships among structure, cladding, insulation and openings. The best details do more than one job with the same element. This multiplicity is not apparently visible. It needs to be analyzed in a plurality of representations to unveil its layering. The detail is therefore synthetic and not necessarily all visible.
The building detail deals with the arrangement of standard construction components that are interrelated in a coherent whole. It deals with market availability, budget constraints and comparison among parallel offers where the most economic bid often rules design choices. The building detail does not transcend the building market to isolate custom made or hypertechnological solutions: it transcends the ordinary only by showing that the same components can be endlessly rearranged.

An exterior light frame of steel pilasters, each measuring 10x15cm. in section and spaced 1,50mt. apart, support a standard concrete floor structure. The pilasters hold on the outside a curtain wall with glass windows and alucobond parapets. On the inside they are clad in gypsum board and form a sequence of separate windows that allow partitions to be placed between them with multiple layouts. Under the parapet, the cooling system with fan coils is located. The facade system therefore offers on the outside a continuous flat glass and metal skin while on the inside it has individual windows that seem excavated within a “deep” wall. The combination of the thin pilasters and layered cladding dematerializes the structure on the edge of the building shell while at the same time offering a “thick” edge that frames the exterior light.

The theater is located along the historic city walls: here a urban master plan inserts it in a new complex of public buildings that form a central square where its main entrance is placed and marked by a large portal. The outside cladding is characterized by a succession of horizontal bands in brick and white stone that recall the nearby city walls but invert their mutual relation: while in the city walls horizontal bands of brick are inserted in a stone surface, in the theater horizontal bands of white stone underline a basic brick volume. The structure is a concrete wall and brick and stone are hanged in a ventilated facade to make the whole appear as a monolithic wall pierced by deep openings.

The fourteen-story B1 tower offers small apartments and offices: a flexible modular typical floor plan can offer hotel like single rooms (1 module), small apartments (2 modules) or office units (3 modules). All units have a generous exterior loggia that enlarges the interior spaces. The structure is a steel frame clad in HPL panels on the outside and gypsum board on the inside. It has microforated screen loggias grouped in textured pattern groups and a full photovoltaic façade. The exterior shows a metal skin screened by the rhythmic patterns of the loggia volumes. behind the loggias, the exterior cladding turns from silver to blue to underline their depth.

In the last years, Studio Valle has developed a prefabricated concrete system for the manufacturing of multiple story housing for the Italian MABO manufacturer. Four prefabricated panels, each formed by two layers of concrete with interposed insulation, form a basic enclosure measuring Mt. 13 x 6,50 in plan. This can be linearly aggregated with a staircase-plus-elevator module and vertically stacked up to four levels to form many residential types (linear, block and courtyard building) with different units (2, 3 and 4 bedroom apartments). The exterior concrete surface can be simply painted or finished with plaster to make the whole appear as a solid monolithic wall pierced by individual openings. The basic shell can be integrated with preassembled metal windows and balconies that are inserted within the panel openings. 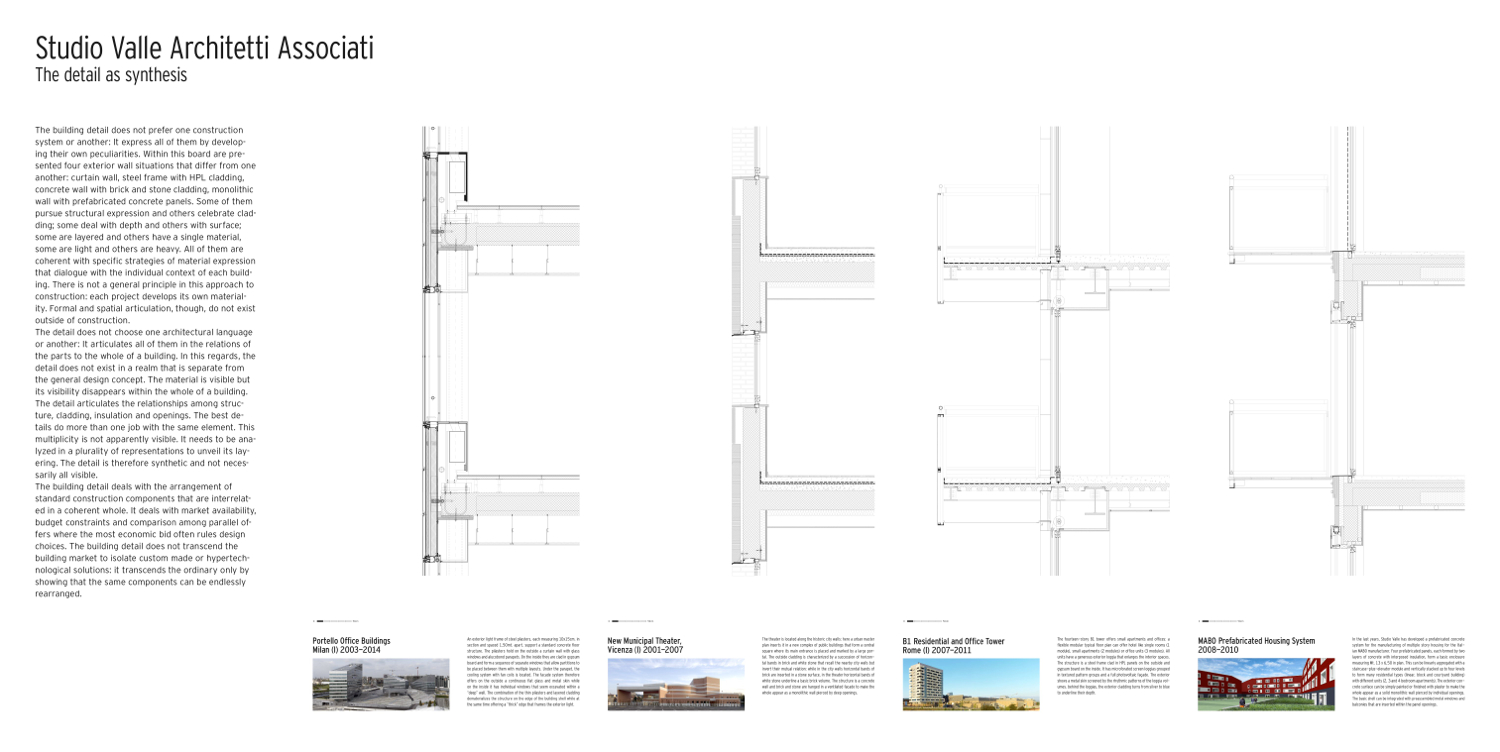