This panel investigates a typical design strategy of Holl’s architectural production: the “double-funtioning element” (Capitanio 2014). On the one hand, the first two sections show how hollow space in-between the building’s structure is utilized as a mechanical plenum. On the other hand, the latter sections present the grid as an overarching tool for large projects, both in terms of a building’s structure and aesthetic perception.
“I think the level of articulation [of detailing] depends upon the project. […] We work in a manner akin to Pierre Chareau or Carlo Scarpa, with a greater interest in the detail. Scarpa was, in fact, a great inspiration for us. In our eyes, he validated a modest practice […].
If, for example, we were to look at the work of Frank Lloyd Wright or Alvar Aalto or Sigurd Lewerentz, we would see in each case an architect who was trying to affect the space down to the last detail. […] [Instead] Philip Johnson would put up entire buildings with nothing but off-the-shelf products and fixtures. […] We wanted to care about the light fixtures, about the furniture we used.”
Gannon 2014:16-18
“The experience of material in architecture is not just visual but tactile, aural, olfactory, it is all of these intertwined with space and our bodily trajectory in time. Perhaps no other realm more directly engages multiple phenomena and sensory experience than haptic realm.
The haptic realm of architecture is defined by the sense of touch. When the materiality of the details forming an architectural space become evident, the haptic realm opens up. Sensory experience is intensified, psychological dimensions engaged.”
Holl 1996:16
– Capitanio, M. (2014) Detailed shuffling, Iuav giornale dell’università (140) p.p. 2,15
– Gannon, T. (2004) Steven Holl Architects/Simmons Hall, New York: Princeton Architectural Press
– Holl, S. (1996) Intertwining, New York: Princeton Architectural Press
– Nordenson, G. (2010) Patterns and Structure: Selected Writings, Baden; London: Lars Muller
Panel curated by Marco Capitanio

“A linear block intertwines with a curved shape. The torus geometry of the curve lent itself to a structural system comprised of trusses formed to the C-shaped section and spread along the curve every 10 feet (3m) or so to delineate the shape of the building. The trusses rise from the ground and arch over to tall columns set inside the glass wall. The cavity in between trusses harbors the mechanical and electrical systems that feed the building.
[…] The structure and mechanical and electrical systems are all closely integrated and become occupants of the form – there is an added meaning to this form […]. The thickness becomes part of the character of the space. At Helsinki we turned that stuff in the middle, the poché, into an actor in the design. […] The cuts for skylights reveal the wall’s thickness, and it is up to the viewer to sense that the building is supported by the wall – both structurally and mechanically.”
Nordenson 2010:312-13

“Again, were interested in housing mechanical and electrical systems in structural elements. The thick wall adjacent to the stairs contains these systems. The precast planks, which support the floor of this gallery space, are fabricated with hollows, to reduce dead load. We took advantage of these hollows and used them as ducts. It is in the tradition of hollowing out structure so it can act as a plenum, except the structure itself was not designed to perform that function, but was adapted to do so. […]
The building structure at Cranbrook is organized around a notion of base and superstructure. There is concrete structure up to a certain datum, and above that is steel – […] trusses. The exterior does not reflect this structural system but instead reflects the circulation […] – changes in material and texture show where interior ramps are. At Cranbrook, there really is no evidence of technology at a distance.”
Nordenson 2010:313-14

“Guy Nordenson, the structural engineer, and I were determined to make the building out of concrete. […] In terms of energy efficiency, it makes sense to have the mass of the building at the perimeter, to act as a natural insulator. Also, with the windows of the dorm rooms set back some twenty inches from the face of the wall, the thickness of the concrete would act as a sun shade, allowing the winter sun to enter but blocking the higher rays of the summer sun.
We devised a new method of precast concrete construction – Perfcon. The panels were all cast in Canada and shipped to the site. Each panel – there were six thousand of them – was unique. […] Reinforcing steel was digitally coordinated and the process ran very smoothly. […] The site-case concrete, on the other hand , was very crude. We intentionally played up the difference between the two systems by lining the forms of the site-cast work with random boards.”
Gannon 2004:71-73

“The buildings are about 30m by 30m in plan with concrete flat slabs spanning between a core of concrete shear walls and a perimeter concrete moment frame. The frame is a grid of uniform dimension interspersed with diagonal members. These diagonals occur on an ad hoc basis where required for building cantilevers, overhangs and overall stiffness.”
Guy Nordenson & Associates (website)

“The massive cantilevers exert forces that are resolved through the introduction of discrete diagonals in the towers concrete exoskeletons. Rather than creating larger concrete forms, steel members are inserted in those diagonals. Additional diagonals are located where there is increased demand on the concrete structure as a result of the skybridges, or to reinforce holes in the grid.”
Josephine Minutillo, Architectural Record 1/2010 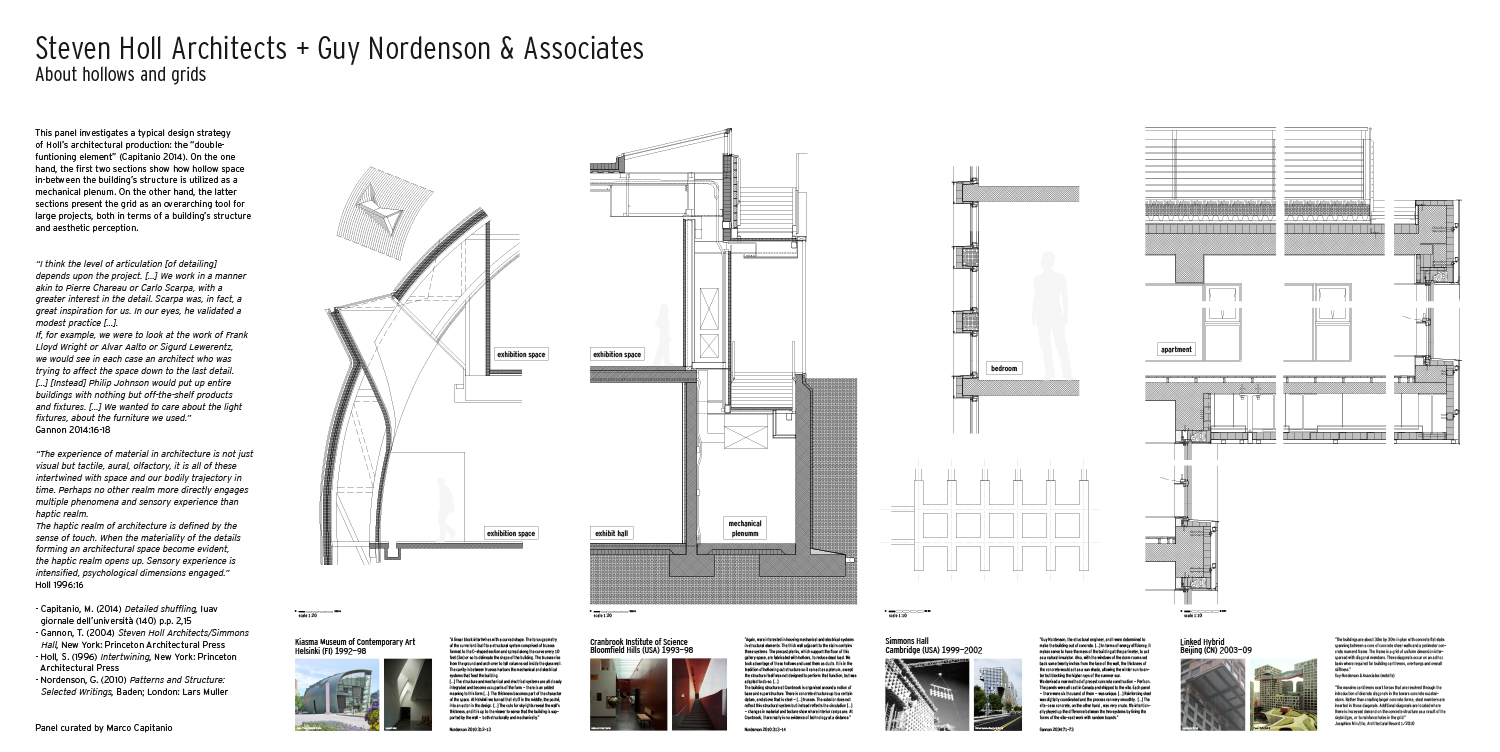