Comparing sectional and elevation drawings one sees they promise that there is a relationship between construction and its expression. The desired architectural outcome should match the construction. Let’s take the example of reinforced concrete construction. Reinforced concrete has great potential in its bearing capacity as well as it is very expressive. Beauty is not an a priori quality of this material; the material alone cannot guarantee a successful final form. The expression of strength and perhaps of elegance can be achieved only by working on the form. This is what marks the difference with stone which has its own specific character; concrete is lacking all of this, being an initially amorphous hybrid. Reinforced concrete has a potential strength while its appearance can be understood only if the selected form communicates this aspect. From this point of view, bridge builders have an advantage in that concrete, with its high performance, can well express its compression and traction capabilities. Buildings are not so spectacular; for this reason it is necessary that the story told by them has a wider scope than simply responding to a static problem.
If the formal expression of the window frames is added to the static of the wall then the mass of the structure relates to the shape of the openings. In this way one creates either a balance between the stable building mass and the repetitive large size windows like in the Medienzentrum in Chur or a layering of external load-bearing pillars that form a very expressive layer in front of the set back windows in the Federal Administrative Court in St. Gallen. Wooden edifices are different, in our work they differ sharply from the massive buildings. In timber construction there is no attempt to represent the abstract building body but rather to present the specific artisanal craft of carpentry work creating a structure of wood profiles and planks.

The building creates a balance between its volumes and the public space. The space of the square is obtained through a retreat of the alignment of the volumes and the road: it faces the city theater and fixes the front of the old town. The façade in reinforced concrete is designed as a monolithic construction and represents an optimized static image of the Vierendeel beam. It is placed above the large opening on the ground floor that opens into the vestibule of the City Hall and into the spaces of the Center da medias (SRG SSR RTR).

In the context of the decentralization of the federal courts, the Swiss canton of St. Gallen endorsed a competition on the mandate of the federation. The new building represents the urban conclusion of Rosenberg’s Hill, sloping down towards the Feldli-Quartier. The building extends it public functions (the halls of the court) along a park, around the historic villa Naef that constitutes a kind of counterpoint to the the vertical two-storey administration building.

The new building has been built in a heterogeneous environment, on the outskirts of Wil. Four wings with different functions form a courtyard. The four-storey wooden building stands on top of a massive basement. The roofs of the differently lightened spaces present continuous variations. A folded sheet roof follows the geometry of the interiors and creates a silhouette positioned towards the oak façade, articulated with pilasters and cornices.

The simple volume is set in the northeastern corner of the lot occupied by the agricultural building. The density of the buildings is emphasized freeing the lawn surfaces. With the tympanum positioned towards the line of slope, it closes and accentuates the silhouette of the buildings. The massive plinth inserted into the slightly sloping ground, forms the basis for a four-storey wooden building, that has wooden pillars inside on a constructive grid of 4 by 6 meters. 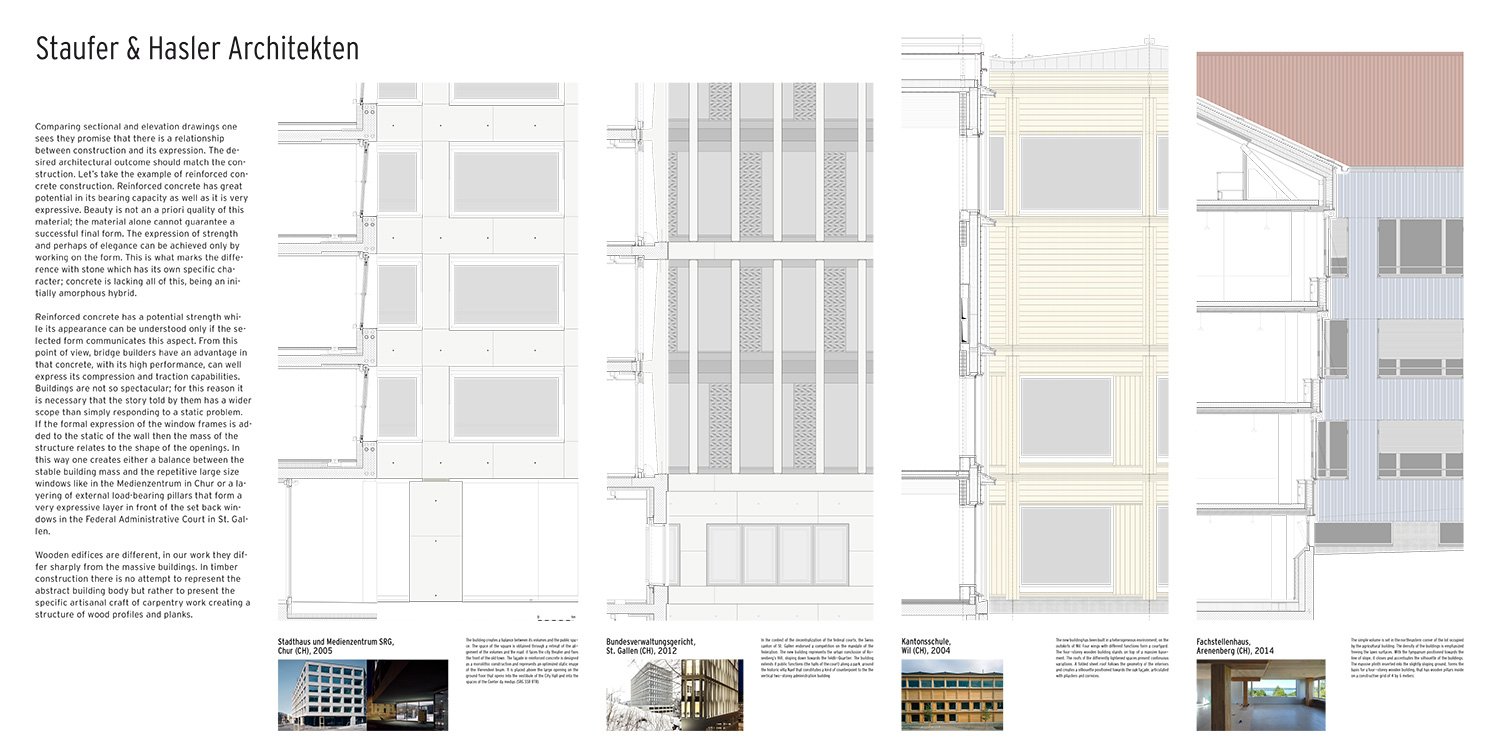