The detail’s construction is a field of project as wide as the town planning. With Autocad, the conception of buildings is entered in the “power of ten“ era, in reference to the Charles and Ray Eames’s movie. We can scroll in the files since the site plan towards the bolt assembly. Since 1/2000 scale towards 1/1 scale. Find the right scale, which in the most effective way to adjust a technical solution, interest us as far as conceptualize a program.
The design of a front begins by technical requirements of the envelope. In this way, we use simple and classical materials like glass, aluminium, terra-cotta, concrete, wood, galvanized steel. We assemble them in a original way to obtain the wished effect. To compare it with cooking skill, we use fresh and natural products and we never use already made products (like a deepfrozen ready meal).
In France, the architect doesn’t produce execution documents for the construction. Our plans are indicative of the deliberate architectural effect. The settling and responsibility are assured by the company which builds. All the construction site work is for us to keep essential elements of the detail’s conception integrating the technical expertise of the construction company.
This reality is heavy because every time it’s a negotiation between the architectural effect which we have the power on and the technical conception is the responsibility of the construction company. Some discussions and exchanges are necessary to find the solution which suits in both, between knowledge, deadlines, regulations and economy. However, this work in progress in the detail’s development of construction site is rich and allows to exceed our technical knowledge with the technological tools and the companies skills.
Périphériques Architectes May 2014

Organized in three levels, this metal-frame house is fixed on a concrete basement. The facades are made of glass outlines called “profilit”, offering thermal insulation as well as intimacy protection.
This translucent envelope is leaned and the different levels are shifted ones compared with others. A zinc roof continues the outside envelope, following the “profilit” glass weft features.
The house includes wide windows. Those clear glass windows are cleverly organized according to the rooms and the view from the house, and connect it with its environment.

The facades are covered by a protection and filtering architectural envelope. The sinusoidal amounts form a sensitive skin like a canopy. The gap revealed by the superposition of the sinusoidal and right amounts produce a dynamic optical effect. Theses stiles protect the building : Biopôle consists in two noble levels and a technical terrasse based in retreat, organized around as central atrium. Skin of the building can be viewed from different points of view and becomes a dynamic facade.

The media library is a 34m large and 32m high cube. On the facade, there is an aesthetic code related to the universe of books and knowledge : it creates an effect of an inequal book pile. These are in fact ondulated louvres laid out on the periphery of the building. It forms a protective envelope.
This envelope becomes porous to glimpse inside through openings shaped eyes on the front. The anodized aluminium facade captures the specific sunlight of the Indian Ocean.
The facades can be seen from the mountain where we can see draw a face, made by the shadows of the offset’s amounts. 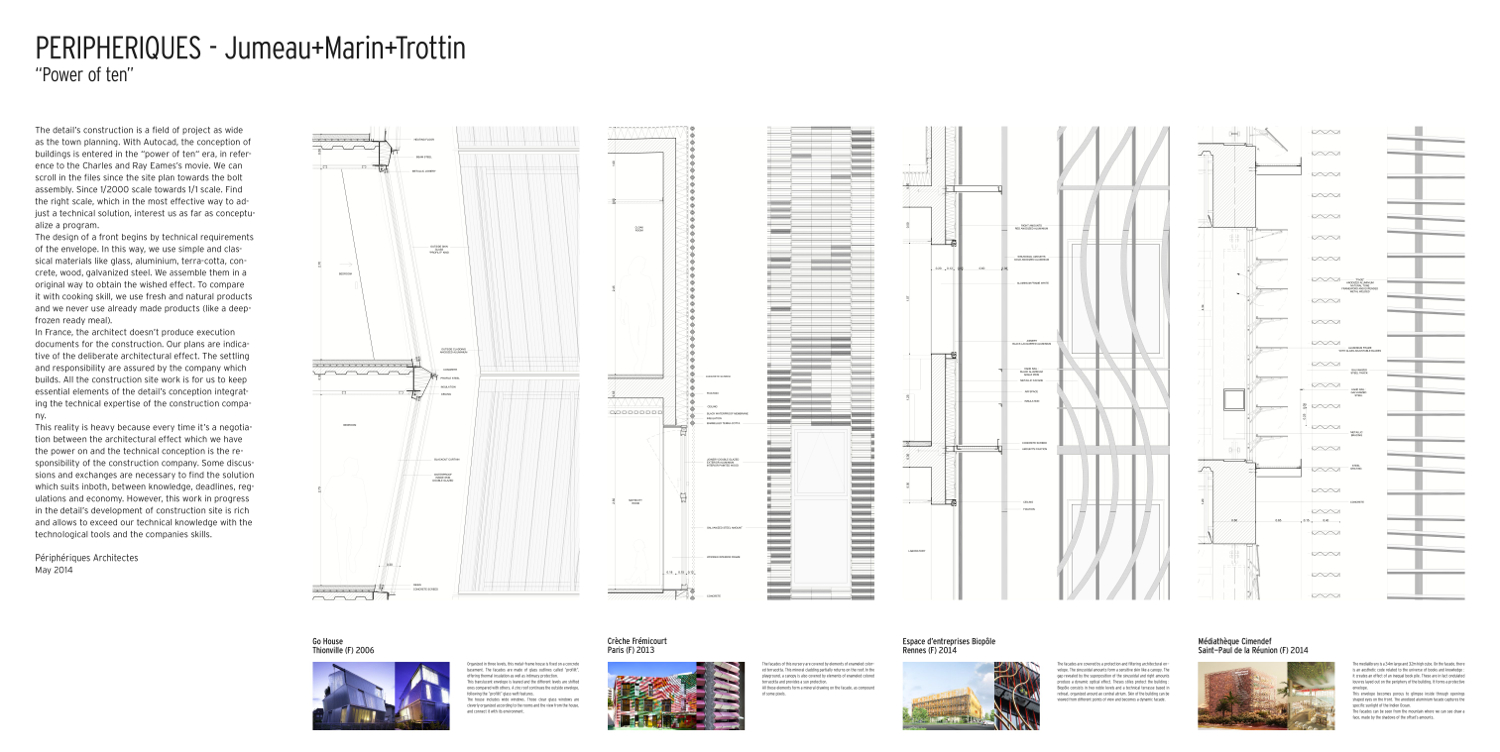