Just for an exercise purpose, let’s try to look at the drawing of the detail with the eyes of a kid. We see dark worlds, we converse with the inscrutable, we get acquainted with unknown lands and boundaries; the real world is far from us.
Let’s look at it with more mature eyes and we discover that a two-dimensional drawing holds, in its lines and descriptions, the matter’s proportions and DNA, the typology and the morphology of the construction.
As time passed, the detail has become a gradual stratigraphy of information – yet always anchored to the principles of classic construction – a thousand- year-old communication system without real transformations of the representation because linked to ancestral processes, which, since the oldest classic treatises, would stand out to define the correct proportions of the individual parts of the construction (the principle of moulding’s representation, for example, has made possible the vocabulary of styles, which follows specific representative systems of forms and proportions).
Which was the real use of drawings in the construction phase in the ancient times hasn’t been bequeathed to us; the only certainty we have is that the main communication between the workforce and the architectures’ manufacturers – in order to describe a construction – used to happen through scale models and not drawings. This, because drawings had an even more abstract comprehension and interpretation of the relationship between thoughts, signs and constructions.
As time passed and through representation’s evolution, the drawing of the detail has developed more and more, always maintaining its function of interpreting the two-dimensional, to better communicate the essence of the architectural drawing, rather than to make the immaterial become material.
Compared to the antiquity of the world of construction, it hasn’t been long since we discovered the meaning of this mental exercise that is the transition from the two-dimensional to the three-dimensional. This is because we have been brought to interact with the natural and extraordinary evolution of representation, which is the immediate process of making form three- dimensional, starting from the drawing and ending up with the creation of objects with 3D printers, one of the systems which belong to the auto-construction of future worlds.

The glass façade in mounted on an aluminium profiles structure. The choice to use this mounting process, in spite of a preassembled cells glass façade, (as conceived during the project process), is linked to the need to guarantee the tolerances between the glass façade and the concrete slabs shrinkage or movements.
The glass façade has 6 different modules types, and every perimetric element is different from the other. The hanging system on the concrete slab is made by a galvanized iron component. The vertical structural element is fixed through to a U metal rails mechanically fixed on a con- crete slab.

The glass façade is a shell of 3000 sqm, perfectly integrated in the ex- isting structure, that contribues to define the rythm of the transparent skin.
The glass façade is realized with a “stick system”. The general façade rythm is generated by the 2 modules succession, while the variation between trasparent and matt surfaces of the 530 modules generates the façade vibration.
The selective wide glass frames, are mixed with matt aluminium skin modules, (thickness 30”10), microholed and mechanically folded, while the electroclouring by interference treatment of the aluminium panels generates the cromatichal variation between grey and blue tones, de- pending on the daylight condition.
Tha façade system performace guarantee a 1.26 W/mqK trasmittance and acustic performance of 45 dB.

The Cotto Façade is made by rectangular extruded tiles, (sec 290×60 mm. lenght max 2525 mm).
Due to the weight of the external skin, the hanging elements needed to be implemented with steel profile HEB 140 with welded Halfen profile (max distance in between 300 cm).
The Structural profiles hanging system, has been studied considering the support geometry. M8 and M12 bolts were used for fixing Halfen profile on brick and concrete walls.
The substructure is in aluminium, ironware in steel. 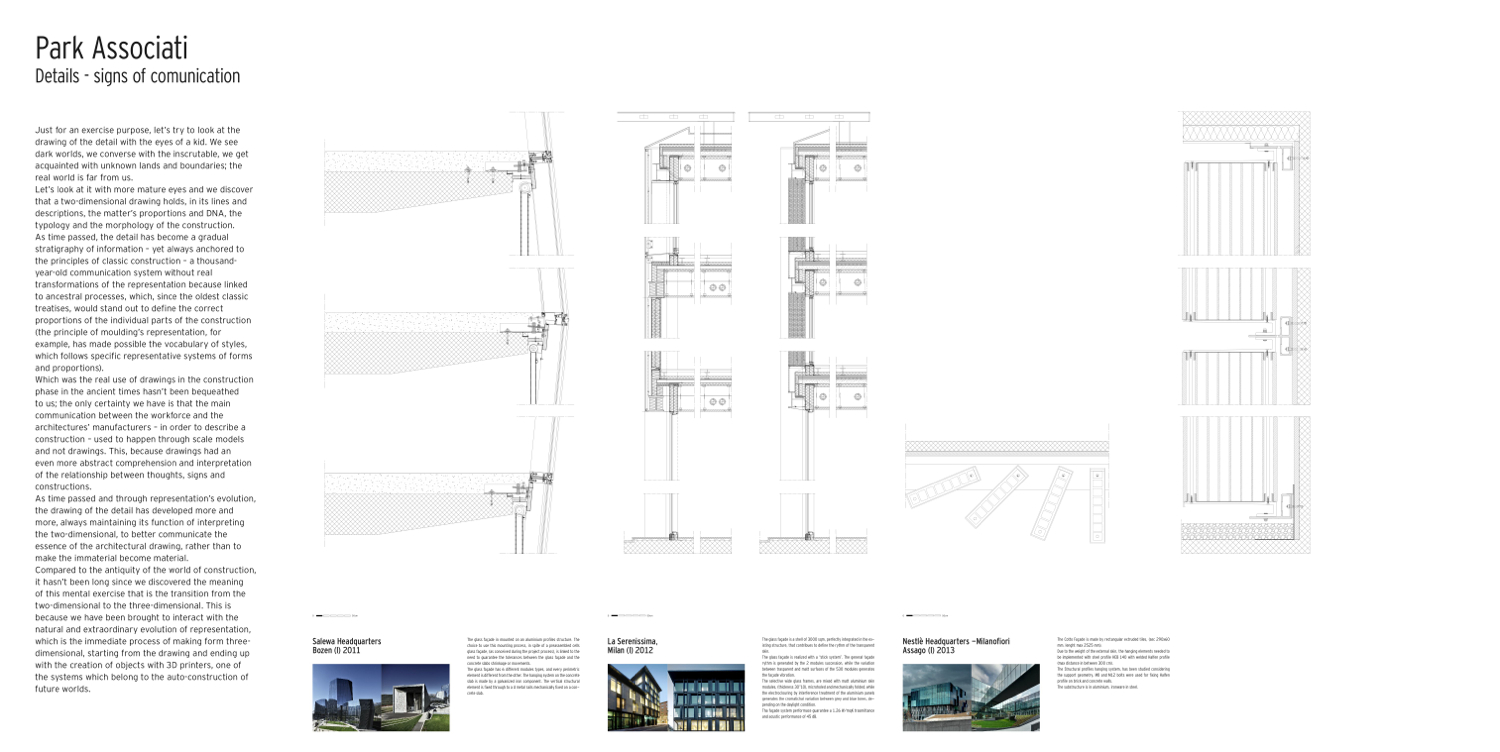