OAB – Office of Architecture in Barcelona – Light and Materiality

OAB picks up on the trajectory of the earlier Carlos Ferrater Studio, whilst incorporating new ways of understanding architecture on the part of the members of the team in a richer, more varied and more flexible way of approaching project design. The renewal and creation of this new platform will attempt to confront the challenges that the architecture of this century has posed in the intellectual and social, technological and environmental fields.
Growing out of the socialization of collective work and based on the personal tendencies of its members, this report includes the projects and works built during this most recent period, projects and works that privilege the desire to work in different contexts by extending and enriching OAB’s range when seeking new channels of formal expression.
To touch upon the theoretical aspects of the project and upon the innovation and investigation of new technologies, without forgoing a respect for the location, the social origin of the work of the architect, and the constructional rationale in the latent aspects of the proposal and the development of the design.
OAB has enabled us to experiment in different areas of architectural endeavor—buildings of varying sizes and factures, public spaces, interior spaces, ephemeral installations or themes to do with landscape—thus facilitating, at the same time, the internationalization of part of the work of the studio.
Different circumstances have led to the birth of this new platform, based on a transversal way of working that is open to innovation and experimentation, flexible in its conceptual propositions, and convinced of the fact that each new project offers a different experience in which we must start from scratch and be selective as we develop the project. This is something that has been learned beforehand, it having been demonstrated that the essence of the architect’s task does not lie in language or in displays of style but in his or her response to the conditions of landscape and the city, to the complexity of the social organization of the programs, to the utilization of light as design’s raw material, with a capacity to generate spatiality and emotion, and to the materiality that impinges on the more sensitive and sensorial aspects that bring the piece of architecture closer to its future users and inhabitants as the final recipients of the architect’s work.
These questions of content and form are the ones that have led to the creation of OAB as a platform with which to confront the architectural challenges of this new century.

Urban system. First piece in a sequence with a perspective view of the Torre Agbar. In its “first piece” role it responds to the geometry of the Diagonal by “turning its head”. This turn leads to a displacement with the podium of the adjacent tower and the jut over the piazza, and constructs the front and side elevations. The fusion of the two geometries opens up the sightline of the TMB building.
The low, transparent body frees up the Calle Bolivia and presents a “lobby-style” public space as a continuation of the piazza and by means of an also-continuous paving. Small modifications are made in the podium programme in order to adjust the imbrication of the two volumes; in this way the façade plane penetrates below the tower, thus prolonging the urban space of the Calle Bolivia. The crown perpendicular to the Diagonal conceals the installations and defines the rear arris of the intervention.

A whole range of possibilities is open to us by working with a company that is continually evolving with concerns about a current image that meets contemporary demands. We are aware that proposing a headquarters/social center/showroom for a business, brand, institution, etc. is more than creating just a building, it is representing and projecting an image through architecture, and therefore the building should express a corporate image in the collective memory. Typological study: since this type of building is based on its uniqueness or character, the exterior has a role of greater importance, especially since it is the first impression of the building. Even though the principal material of the façade is glass, the building does not function as a large window display. The glass works in different ways so that at some times it appears transparent and functions as a type of veil and reveals a bit of the inside but at other times it is simply perceived as transparent. In this way, the building becomes a unique piece, both day and night since in daylight it functions as a piece that attracts passers-by due to the seductive effect of the veil, and at night the building becomes a beacon.

In the eastern Mediterranean, on the west coast of Turkey, atop a headland 135 m above sea level, the new building is constructed in a style in keeping with the fortresses, citadels, churches and monasteries that have characterized the landscape of the Mediterranean. A banked wall of stone from the immediate vicinity delimits the geometric ground plan and the grounds themselves, helping the upper horizontal plane of the platform to merge with the natural topography. Upon this platform, on a 40 x 40 meter-square ground plan with its axis on a north-south diagonal, there is a structure of screens, cantilevered girders and concrete pillars that go to form the skeleton of the building. A huge 6m eave protects the ground-floor level beneath its shade, acting as a porch and intermediary space between inside and outside. On it, an intercolumniation of screens and pillars, along with huge roof lanterns, rounds the building off against the sky. Within, an ample, off-center, double-height atrium is converted into the heart of the building: a place for exhibitions, encounters and celebrations. In its conception the intervention seeks after timelessness and permanence.

The house obeys a number of extremely simple geometric rules, and it is in these that the power of the design lies. Akin to a musical staff, a 7 x 7 m orthogonal grid with superimposed diagonals forms the compositional basis of the project. The diagonals are the generating elements of the prolongations the roof undergoes—skylights in some cases and double heights in others—thus generating an artificial topography. This means that the program unfolds at garden level in a direct rapport between interior and exterior, where living rooms, lounges, library, dining rooms, kitchen, master bedroom and guest suites are sited; all of these visually linked via the long perspective views afforded by the windows. In vertical terms, individual relationships exist between the main floor and the lower and upper floors, in permanent response to the demands of program and by closing off the three-dimensional continuity of the building. The design is materialized as an extended rigid roof with sporadic moments of contact with the ground, with the rest of the perimeter given over to lightweight, transparent materials: huge, screen-like picture windows introduced at specific points of the program. 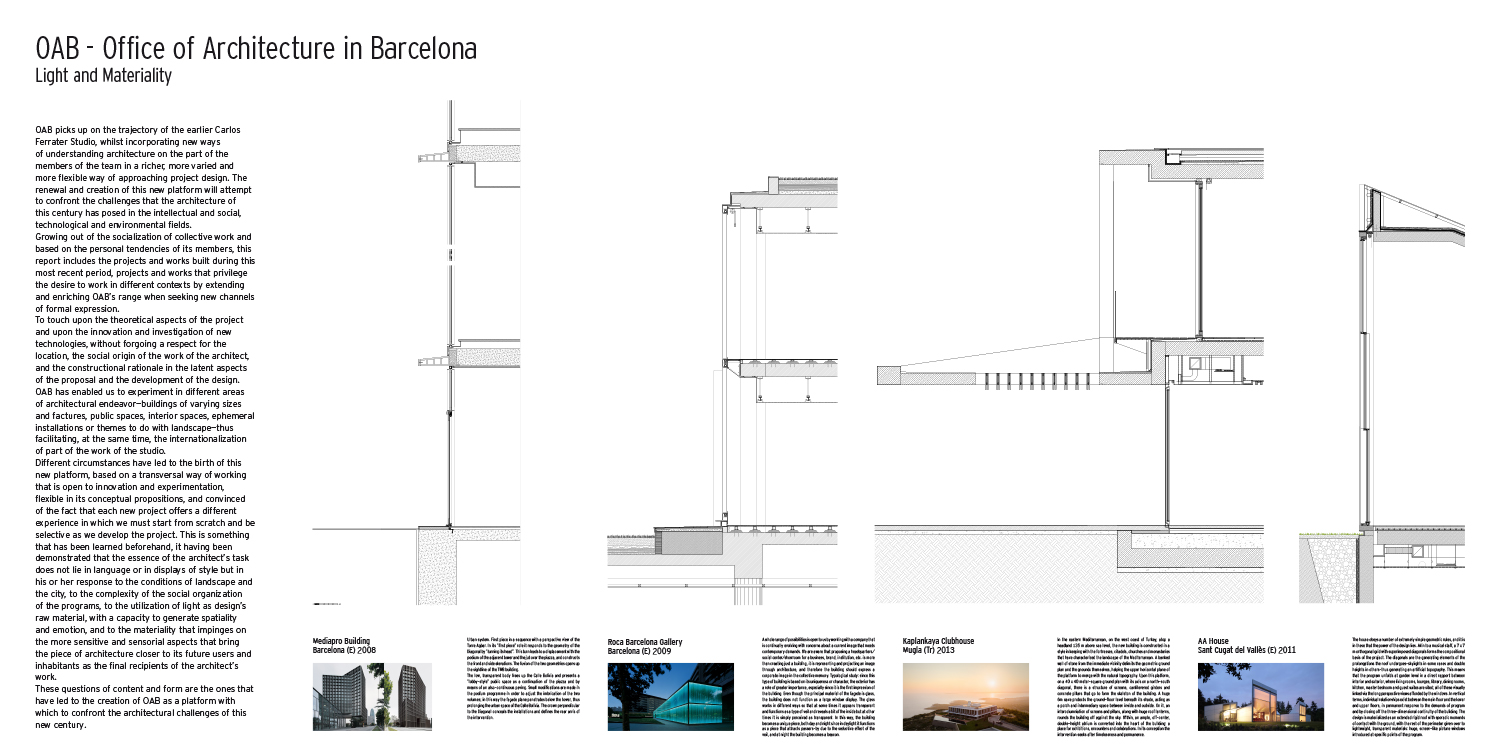