Reinforced concrete is a new building material that experienced a rapid ascendance. Today, it dominates construction work throughout the world and yet does not have the best image among the general public. For Modernism it was the medium that opened up new structural, spatial and formal possibilities. Reinforced concrete structures seemed to question all previous tectonic rules. The casting technique in formwork also created monolithic surfaces in hitherto unknown dimensions. All this inspired architects and the industry. Since 1950, concrete has been synonymous with fast, cheap industrial construction. However across a range of social classes, all that also entailed a momentum of cultural alienation and the irritation of accepted scales of reference. The oil crisis in the 1970s and the resulting stringent insulation regulations brought turbulences to the industry, but construction with exposed concrete has experienced a renaissance in the past two decades.
The architecture of Miller & Maranta is especially good at showing the transition from the all too often “characterless everyday building material” to an “artificial stone” that can be adapted to the relevant context, the functional programme and the desired appearance in detail. The examples shown range from a school building to rented accommodation and housing for the old aged. They are situated in different regions and each offer tailored technologies that were specifically developed for the task.
The construction of fair faced concrete buildings requires highly qualified advance planning as well as accomplished craftsmanship in its technical implementation. This “new generation” of fair faced concrete architecture, where all available components of the game are mastered and used creatively, as is the case in the examples by Miller & Maranta, lead to unmistakeable, original solutions, while achieving a previously unattained transparency between the structure and its appearance, between the core and theshell, the space and its surrounding, and between visual and haptic aspects thereby taking the genuine qualities of construction with reinforced artificial stone to a new, sustainable level of architectural refinement, in which the essential requirements of state of the art thermal properties, acoustics and sustainability are fulfilled.
Exerpts of a text written by Otto Kapfinger, Vienna
The whole text and the details are published in: BauhausUniversität Weimar (Michael Loudon, Florian Kirfel, Daniel Reisch): Architectural concrete in Detail. Four Buildings by Miller & Maranta, Quart Publishers 2011; Photography: Ruedi Walti, Basel

The unity of the loadbearing system and the building’s spatial structure continues in the materials it comprises. All loadbearing elements, both inside and outside, as well as the east and the west façade, which are only connected to the loadbearing structure at specific points, consist of fair faced concrete produced onsite.
On the lower levels, the exterior walls of the former tank could be reused, although they needed reinforcement and a steel insert to resist the forces created by the upper levels. The subsequent storeys were cast in concrete in several stages, each consisting of one floor and the dividing walls it supports. During the entire process, a steel substructure was required on the lower levels, which was removed after the shell construction was complete, since only then was the supporting structure fully functional. The cubic appearance of the building is enhanced by the detailed design of the outer façade. The wood and metal windows that are flush with the façade have broad frames.

Although the tower looks monolithic from afar, traces of the formwork, the construction stages and the panel joints all remained visible after blasting. The resulting irregularities on the surface enhance the building’s initially coarse expression. The outer façade was made of normal concrete with yellowgreen stones as an aggregate. The pebbles are revealed as the cement surface is removed. The changing colour and coarse texture of the surface is an attempt to reflect the irregular plaster surfaces of the utility buildings and garden walls, which is a common feature in the region. Panel formwork with plastic coating was used, so that no special properties for the fair faced surface of the concrete were required. 12 cm of the cement surface was removed from the exterior shell using a highpressure water jet. This form of blasting is known as hydroabrasion. It requires a great deal of experience from the craftsmen to achieve a uniform overall appearance, since the concrete has different strengths at the form work joints.

The loadbearing structure of the façade is independent from the loadbearing structure of the building’s interior. The construction stages are therefore clearly defined, taking the constructive possibilities of the concrete material into account:
The residential building was built tectonically from bottom to top in
a consecutive fashion of insitu cast concrete, and layered outwards from the inside for the subsequent assembly of the prefabricated parts. Production of the insitu cast concrete structure for the building interior was mainly independent of the exterior façade construction. This allowed the subsequent gradual assembly of the jointless outer wall. The dark brown varnish of the façade integrated the building into the surrounding
Schwarzpark. The contrast between interior and exterior spaces is blurred by continuing this method through the entrance hall and into the interior of the stair turrets.

The façade concrete has a warm, friendly expression and a sandstone touch. Both features reflect the urban planning context and cultivate it further. The fair faced concrete, which otherwise has a smooth appearance, was given a sandblast finish. This partially removed the concrete surface and created a diverse texture, in which the aggregate in the concrete shimmers lighter and darker due to the different light refraction. Apneumatic method of sandblasting was used for the old people’s home, whereby the fair faced concrete surfaces are treated with a compressed air jet. 2 to 3 mm of the cement surface was removed by the blasting, so that aggregates became visible and a rougher surface structure was achieved. The modern material concrete is thereby adapted to suit the finely textured sandstone façades of the sos and 1960s in the area around Spirgartenstrasse and Badenerstrasse. 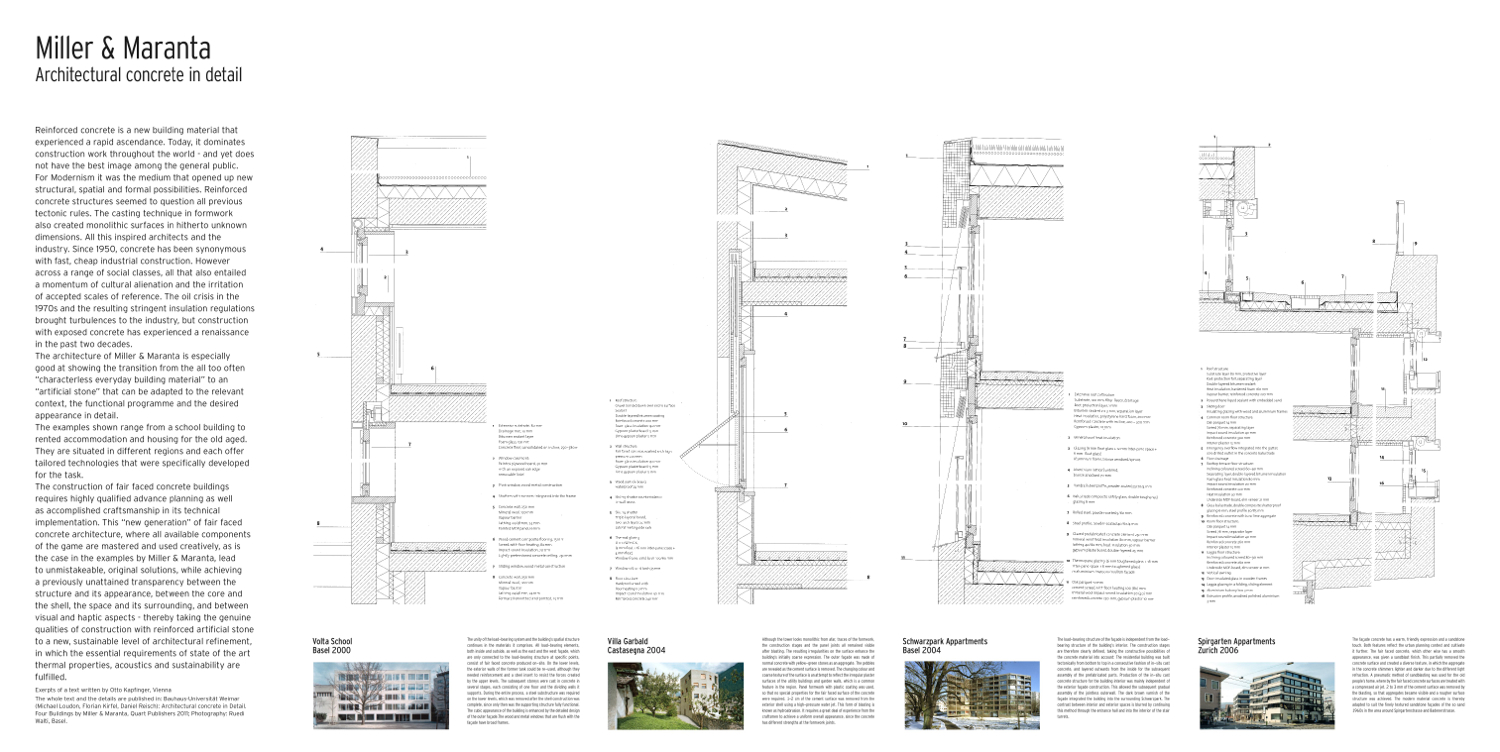