Luigi Moretti and the Column

The theme of the relationship between structure and form in architecture, its spatial configuration and man’s own perceptual structure has been investigated and experimented in many works designed by Luigi Moretti, especially after World War II. Despite claiming the need for each architectural element to be both “real” and “a representation” – that is to be able to fulfil structural, functional, technological tasks as well as being expressive – Moretti actually complicated the representation of the structure, sometimes altering it and proposing an “hyperbolic” vision, as in the case of the corner pillars of the Montreal Stock Exchange Tower (1960-1965), sometimes manifesting it with few elements, using the rhetorical figure of “allusion” as in Villa La Saracena (1955-1957). Consequently also the building joint, the structural tie between the bea-ring elements, is “in representation”, sometimes even exalted, as a consequence of the formal choice (hence of perceptive values, of the emotional impact of a cognitive act), as a “genetic centre” where the project begins, then, once realized, evolving to communicate the “feeling of construction.” The details presented refer to the different interpretations of the architectural order constituted by pillar/column and slab/entablature. Moretti combined the classical tradition with the new possibilities offered by the technology of precast and prestressed concrete limiting the number of supports and diminishing the sections of the bea-ring elements that have such a high quality and sculptural character to rival the order of a Greek temple or the palaces of Michelangelo, recurring references that influenced the design for the underground space of Villa Borghese parking, the urban image of the Enpdep office, as well as the la promenade architecturale envisioned for the Fiuggi spa resort.
Annalisa Viati, AAM Mendrisio

The structure stands in villa Borghese gardens on a total area of 3.6 ha, it consists of a car park and of a shopping centre on two levels. The car park’s different zones are connected by long underground pedestrian ways with some city’s areas, through three entrances: on viale Muro Torto,piazza Canestre and piazza Brasile.
The structure is composed by an orthogonal link of shaped pillars – like a mushroom – that enlarges itself in proximity of the over floor. Large circular excavations keep in contact the underground car park with the outer space, and they permit light and wind to transfix themselves, while a green cover hides the roofing.
Ermanno Zulian – L’industria italiana del cemento n. settembre, 1972

Luigi Moretti, in 1964, built the new headquarters of national welfare for public employees (E.N.P.D.E.P). The building is an abstract square prism and just four reinforced concrete pillars supportin the floors below. The structure is completely external to the prism. Il has a very strong figurative power, a plastic sing that characterizes the urban landscape. This building comes from the research of Moretti on geometric structures. He analyzed how the pure form could be applied to the pratice of the project. Moretti loved the pure form and wanted il derived directly from the structure and this drew and articulated spaces.
Giovanni Bordin – Cecilia Rostagni (Ed.), Luigi Moretti 1907-1973, 2008

The spring Bonifacio VII was built at the beginning of XX century with an elegant liberty style. Today we can see only the original evocative entrance portal. In fact, in the Sixties the structure was completely renovated by a project of the architect Luigi Moretti. He created a dialogue between architectural concrete elements and the lush vegetation, playing with open and closed spaces.
In the drawing on the top we see a detail of the pillar of the “Rotonda”, the main building of the new realization. It develops itself with the same lightness of a cloth across the deep greenery.
Andrea Valvason – Domus n. 508, 1972

The couple of buildings projected by Luigi Moretti, was destined to the Esso Standard and they were inaugurated in the 75° anniversary of the society. The palaces stand on a rectangular area, that forced their hammer shape, with two volumes of different height.
On the grund floor there is a pilotis free space with only the entrance hall, the other plans are occupied by offices an the executives’ spaces.
Above the free space of the ground floor, Moretti thought a curtain wall with two main parts: the vertical sun control louvres, and the closing system made by sliding windows and in coincidence of the slab a particular system composed by a glass element and a covering panel in the interior side. This type of enclosure, permits to have the brightness of glass but at the same time it hides the background.
Riccardo Brasolin – Cecilia Rostagni (Ed.), Luigi Moretti 1907-1973, 2008 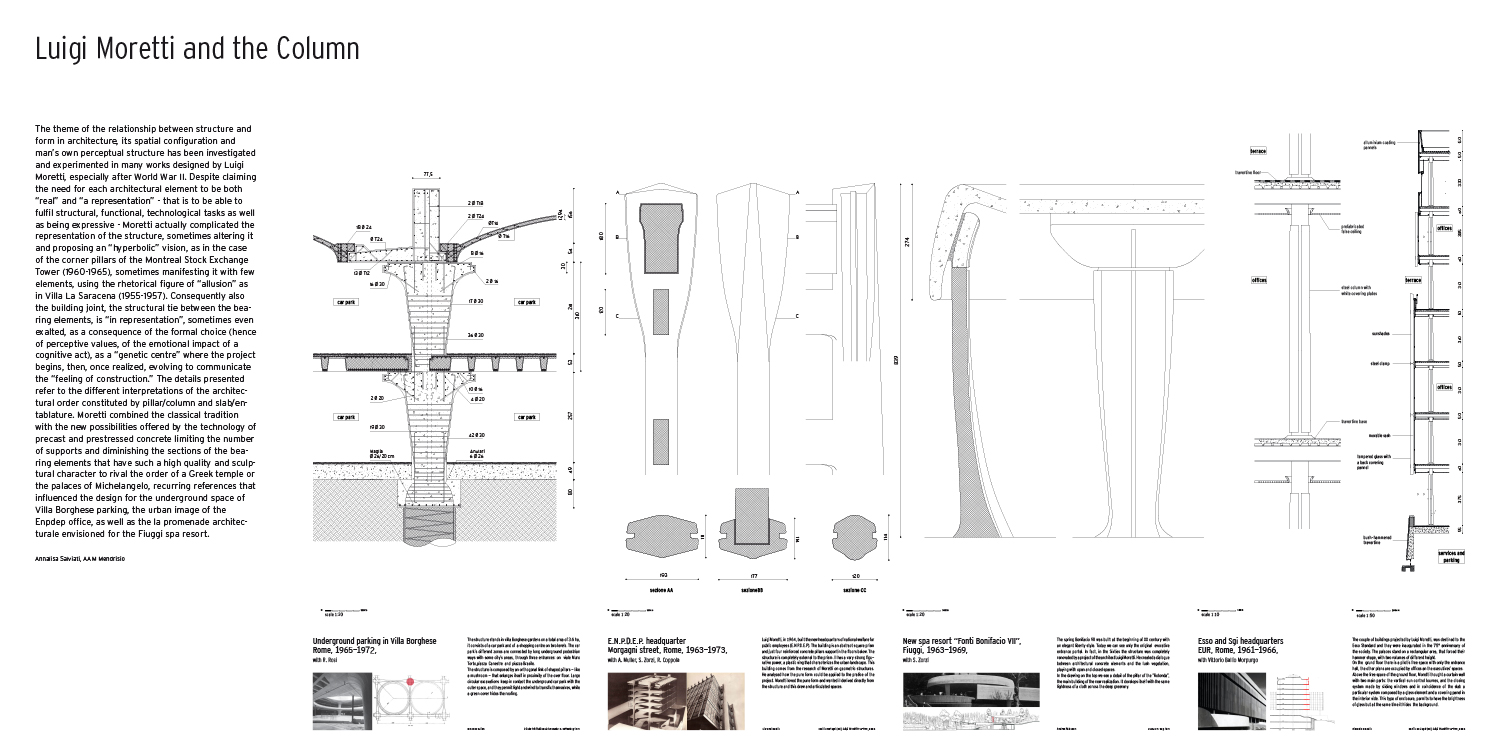