We think that the facade is more than a physical boundary between inner and outer space. It is an architectural element which has its own thickness, far beyond the concept of “skin” so fashionable nowadays.
Because it constitutes a limit the facade it is a central theme of our architecture. The relationship of the building to its surrounding context is a key issue for us, although we do not forget the specific character of the interior space and how it relates to the outside.
In most of our built projects this mediation occurs with a strong materiality more specifically in the window opening.
The choice of building materials reflects the nature of the place, the pre-existences and the intention to assure a lasting and dignified life. The window becomes a leading theme in a certain autonomous way.

Author: José Ignacio Linazasoro
The new facade, from scratch, is constituted by a structural grid of steel and by a curtain enclosure wall of handcrafted artisanal bricks, which recalls the old church ruins nearby. The wooden window frame, which is the main theme of the facade,is located in different depths within the wall thickness, in order to control the views from the interior and to play with light and shadows on the exterior side.

Library on the ruins of the church, Escuelas Pías de San Fernando
Lavapiés – Madrid (E), 2004
Author: José Ignacio Linazasoro
The new library facade, built upon the ruins of the ancient church, is a thick brick wall crowned by two windows which open a view towards the square. The wall incorporates, like in a lapidarium, stone blocks belonging the ruins. The facade also uses old bricks taken from the ruins. The construction system is that of a hollow wall made by various layers of bricks.

Authors: Ricardo Sánchez and José Ignacio Linazasoro
The external facades of the Segovia Campus have a stone base of ribbed granite. Upon this base, the facade has two different planes: the rearmost one, protected from the sun, is made of a continuous glass surface. The exterior plane instead is articulated by cubical volumes, which cantilever over the base. They have a wide concrete frame and a three-dimensional pre-cast concrete vaulting, which aims to give some thickness to the windows. This thickness also generates a play of lights and shadows which characterises the facade. Windows are protected by wooden shutters controlling the light in the interior spaces and making it possible to completely obscure them.

Authors: José Ignacio Linazasoro, Thienot-Ballan-Zulaica Architectes, Ricardo Sánchez (Auditorium)
The complex is made by two buildings: one of them hosts the Congress Hall and the administrative offices, and the other one the Auditorium and the Cafeteria. The main facade of the Auditorium, where the cafeteria is located, is built with fair-faced concrete portals featuring T-shaped pillars that outline large glass surfaces, framed by wooden elements and protected with brise-soleils. The glass surfaces, with glasses designed by the artist Flavie Serrière, introduce colours in the cafeteria indoor space; in their lower part, there are some bow-windows which enable the view towards the street. 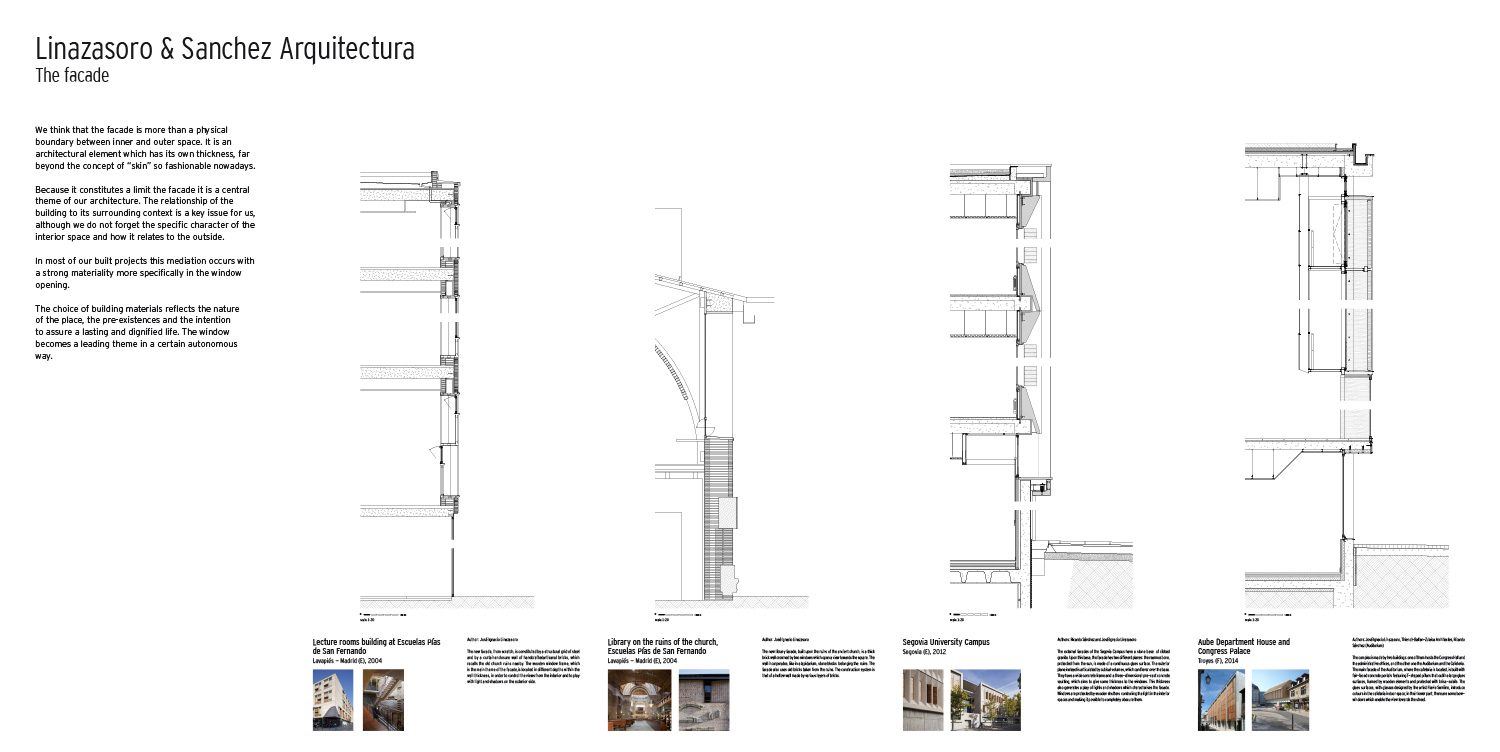