The projects here presented translates a study on patterns into a contemporary design approach, bridging global technology with local culture. For the projects different types of patterns were chosen as source of inspiration and interpretation. Some are more abstract, but most inhere certain geometric qualities and often exhibit a layered depth. The selected patterns are composed of geometric motifs which can be easily translated into simple components that can be used for designing either single element or groups of elements for construction. A set of simple rules –such as creation of depth, opening of gaps, articulation of volumes or covering of a given surface– was implemented to enable the bi-dimensional system to become three- dimensional. The rules were based on the idea of producing a new relationship between architecture and a more appropriate environment for the future.
LAPS intends to produce an architecture that blends and harmonizes nature and culture and which is the product of a close relationship between the building and the places where it is located. Weather it’s for a Medieval castle in Sicily or for a modern and transparent building in Paris, for a new construction or for a rehabilitation, for a small flat educational building or for a multi-storey museum this approach inspired by and to the natural and cultural context doesn’t change producing every time different results.
LAPS has developed a spatial philosophy and constructive methodology using the concept of patterns and materials. By merging patterns – which means ideas, models, masculine principle and comes from the word “Pater” which in Latin means “Father” – and materials – which means matters, substance and also comes from a Latin word which means -MATER “mother “-feminine principle, LAPS aims at solving complexity through simplicity. With irony, but also scientific rigor and openness LAPS’s goal is to create a type of new organic architecture made of fluid and warm spaces, light but stable, instilled of a sense of elegance, true freedom, and harmony.

Recently delivered by the team MAB + LAPS in Paris for RIVP operation, the project is a mixed-use building
that accommodates plural programs such as the premises of the Patronage Laic with information center, multi- purpose halls, exhibition space, and thirty houses for young workers. Located at the intersection of Avenue Félix Faure and Rue Tisserand in an urban area punctuated with Haussmannian buildings, the project reinterprets the Parisian tradition of corner building. The architects, responding to the will of the contracting authority of having a friendly space open to the general public, promoted a project made of conviviality, and designed generous spaces for meetings. The main idea is to favor the opening of the building to the city, and a seamless connection between interiors and exteriors, architecture and nature. Light is one of the main feature of the project. During daytime, the main hall is invaded by zenith sunlight, and at night the facade, realized with U-Glass panels, is backlit and turns into a sort of magic lantern. Whit its elegant, milky, luminescent facade the building has become a reference point for the neighborhood.
Type: Mixed-Use Building & Social Hoousing / Site: Paris 15 éme / Year: 2014 / Client: RIVP / Architect: MAB Arquitectura + LAPS Architetcure

Within Bourgogne Region, in Migennes city in the area of Mignottes, the building was required to accommodate pre-elementary school and kindergarden programs.
The school, designed by LAPS with CIL Architetcure, is made up of pentagonal geometry with a central court. The building takes advantage of the geometry of the plot it stands on enough space on each sides for planting trees, flowers and grass.
The building main entrance is situated on the north-west side of the building, and it connects the nearby city school with the parking zone.
Rooms, offices, and all the spaces are organized around a central empty court. This area serves as playground for kids, and also as welcome area for families. The idea is to grow an interest in kids for planting herbs, flowers, and vegetables in the inner court. The school pedagogical system have decided to work with the architects to integrate the creation of this new space in the school curricula.
Type: Kindertgarten and recreation center / Site: Migennes, Bourgogne / Year: 2014 /Client: Villle de Migennes / Architect: CIL + LAPS Architetcure

The project here presented is part of larger architectural project that is trying to save a town. In less than 4 years -Andrea Bartoli, a self-confessed “notary by profession and cultural agitator by passion”, and his wife Florinda Saieva- have achieved the near impossible: turning a run-down and semi-abandoned town in the south of Sicily into the island’s capital of cool. In the context of increasing vitality and hope bringing change to a town with latent creativity, LAPS Architecture in partnership with Castelli Architecture has designed the Children Museum. The Museum will be dedicated to children, teenagers and people of all age young in spirit. The projet would play a pivotal role in the community activities and is the result of a bold renovation of an abandoned aristocratic building of the XVIII century. The facade is made of solar panels and perforated steel plates arranged in a dynamic sculptural form attempts to achieve a certain porosity and to give shape to the energy of the community. The interiors offer a very warm environment with a rich program -a theater, workshops, video making, music and cook school among the other activities.
Type: Children Museum / Site: Favara, Sicily / Year: 2015 / Client: FARM CULTURAL PARK / Architect: CASTELLI STUDIO + LAPS Architetcure

Realized thanks to the use of a single aluminum connector, Parapertusas’ coat of arms has been abstracted into a pattern and codified in a texture that possesses the qualities of a rhyzomatic plant, devoid of any hierarchical structure: it expands adapting parametrically to the context. The cells that “emerge” through extrusion were distorted, folded and then rounded to accommodate different functions. This process enables their final form to suggest the rule of composition without explicitly and immediately revealing it. The project creates complexity through simplicity. The interior display space is composed of panels in structural mdf, obtained by cutting the facing in sandwiched thin sheets. These sheets were then combined and assembled manually using aluminum connectors. This process made it possible to create a soft texture, different than the typical architectural design of square-box shops. The project for the Castle reveals traces of an architecture in a state of becoming. The project tries to define a mobile geometric axiom, pregnant with materiality, desirous to create a new order, yet not necessarily definitive.
Type: Urban Design Center/ Site: Favara / Year: 2013 / Client: Andrea Bartoli, Florinda Saieva / Architect: LAPS Architetcure / Component design and engineering: MYOP-My Original Project 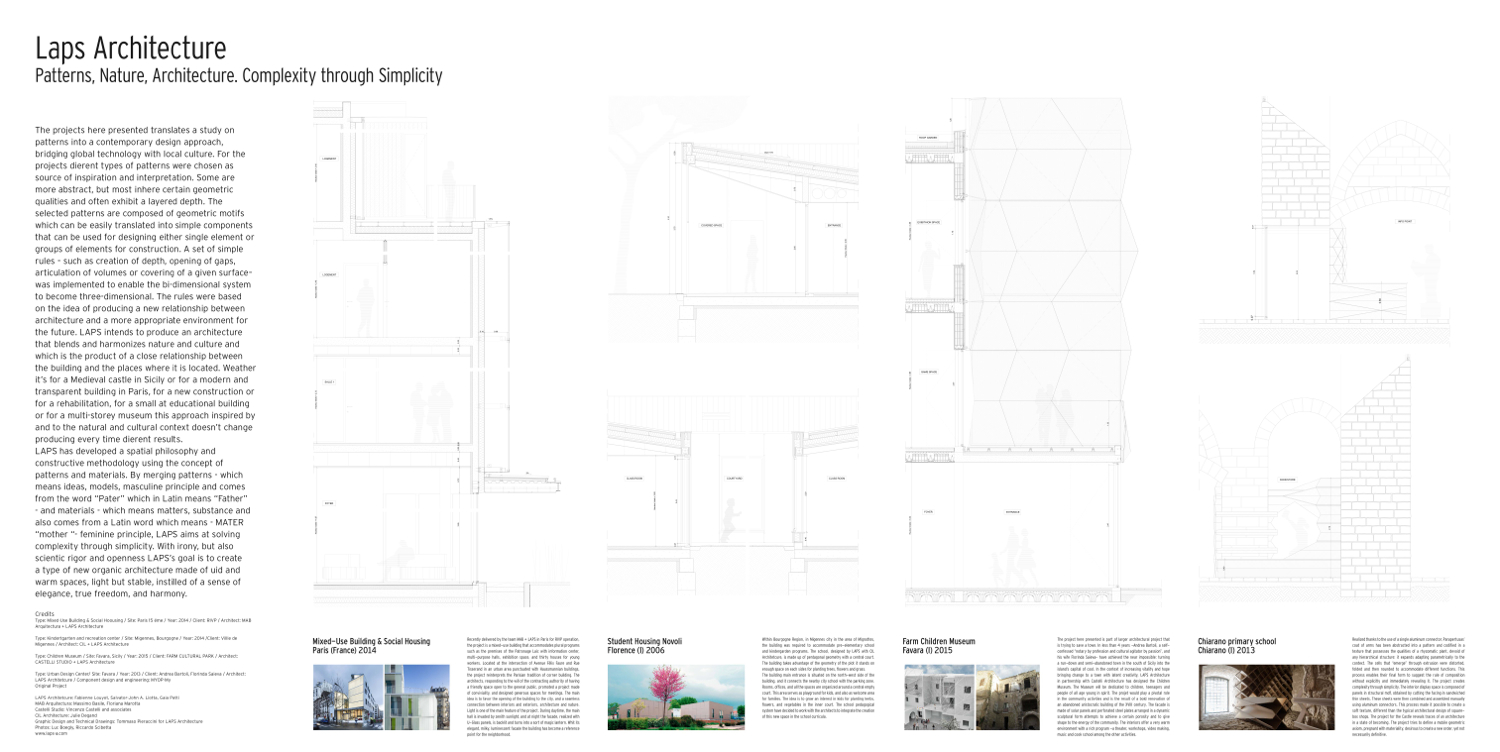