“Architecture begins when two bricks are put carefully together.
Architecture is a language having the discipline of a grammar.
Language can be used for normal day-to-day purpose as prose.
And if you are very good at that you may speak a wonderful prose.
And if you are really good you can be a poet.
But it is the same language and its characteristic is that it has all these possibilities.”

Following the words of Mies van de Rohe, we also think that architecture is a language having the discipline of a grammar but, differently from literature and music, architecture is a language provided with different scales and consequently different moments of investigations. Whether you start from the beginning or from the end of the process – from the urban scale or from the material choiche – every step has to be coherent and consistent with all the others; from the beginning to the end and viceversa. A very difficult aspect of architecture is to be consistent during the entire – and often very long – process which spans from the project to the completion.
So the design of a specific detail or of a specific construction typology, but also, going back, of a window typology or of a facade design, should not be choosen for itself – i.e for its beauty, for its practicality or for its cost – but inside of specific and rigorous route; they have to be the right translation of a general idea of the architecture and, in turn, of a specific project.
The risky alternative is frivolity, formalism and superficiality.

As the counterpart of a very detailed functional and morphological program, the design of the enclosure of MAST has been interpreted to achieve maximum neutrality. The neutrality of the enclosure allows the urban dimension to prevail, favoring a background vision. Cladding in panes of glass, screen-printed with curtains, it runs along the whole perimeter, creating a ventilated interspace in front of both the large glazed panels that can be opened, and also along the opaque walls. Combined with the aluminum blades that structure the innermost fibers of this complex membrane, the cladding conveys a light, uniform yet at the same time mutable image.

Only the enclosure of the creche is an exception to the rule, responding to the special type of users for which it was made; vertical ceramic extrusions glazed in different colors take the place of the printed glass, in tune with the playful, light character of the internal spaces they protect. An horizontal cut allows the childrens to have a look at the garden outside.

The facade of this high residential building follows the idea of extending every apartment outside, giving each of them an exterior space with the same spatial quality and intimacy of an interior, in other word an extension of the interior in itself. The loggias are thus a membrane between inside and outside, an hybrid space rich in quality. The glass louvre allows interaction with the users and at the same time variability of the facade reaching an urban quality.

The enclosure of the office spaces – made of custom-made aluminium brise-soleil – follows a double aim: the first is about the relation between the new building and the urban surrounding. The brise soleil gives the building an abstract appearence which, in similar way of MAST, allows the urban dimension to prevail, favoring also in this case a background vision.
The second is about the interior space following the aim of filtering the sunny and intense light of Rome. 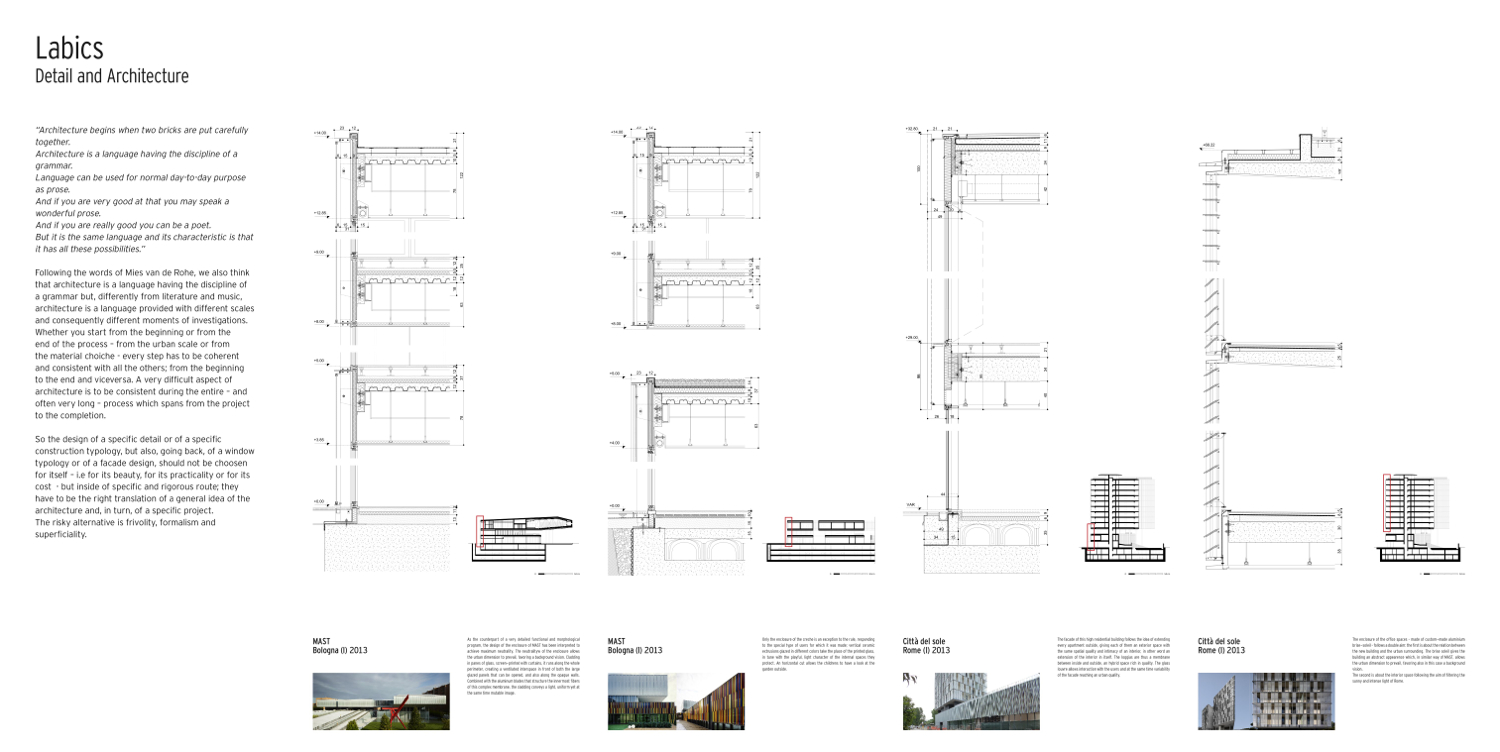