We want to create a façade that feels like animal skin. The skin of living things has thickness. The thickness balances environmental differences between the inside and the outside of the body. And this thickness is gained from accumulated layers. In my view, façade of architecture can be thick with the existence of layers, therefore must be much thicker and more stratified. Accumulated layers show that the exterior changes gradually towards the interior – outdoor to indoor.
By being layered, the skin could become a structure to support architecture. The skin of sea cucumber is a great reference for this. Their bone is not located at the center of the body. It is broken into pieces and tucked into the skin. In my design also, bone is often scattered into the skin and the two elements are indistinguishable. As the result, such skin with thickness becomes soft and warm. Stroking it is so relaxing – like when you caress your sweetheart.

This shop, specialized in selling pineapple cake (popular sweet in Taiwan), is in the shape of a bamboo basket. It is built on a joint system called “Jiigoku-Gumi,” traditional method used in Japanese wooden architecture (often observed in Shoji: vertical and cross pieces in the same width are entwined in each other to form a muntin grid). Normally the two pieces intersect in two dimensions, but here they are combined in 30 degrees in 3 dimensions (or in cubic), which came into a structure like a cloud. With this idea, the section size of each wood piece was reduced to as thin as 60mm×60mm. As the building is located in middle of the residential area in Aoyama, we wanted to give some soft and subtle atmosphere to it, which is completely different from a concrete box. We expect that the street and the architecture could be in good chemistry

In the corner premise of just 326m2 across Kaminari-mon Gate, the building was required to accommodate plural programs such as tourist information center, conference room, multi-purpose hall and an exhibition space. The center extends Asakusa’s lively neighborhood vertically and piles up roofs that wrap different activities underneath, creating a “new section” which had not existed in conventional layered architecture. Equipments are stored in the diagonally shaped spaces born between the roof and the floor, and by this treatment we could secure large air volume despite its just average height for high-and medium-rise buildings. Furthermore, the roofs not only divide the structure into 8 one-storied houses but also determine the role of each floor. First and second floor has an atrium and in-door stairs, creating a sequence from which you can feel the slope of the two roofs. On 6th floor, taking advantage of the slanted roof, we were able to set up a terraced floor with which the entire room can function as a theater. As angles of the roofs inclined toward Kaminari-mon and the heights from the ground vary from floor to floor, each floor relates differently to the outside, giving a unique character to each space.

This is architecture that originates from the system of Cidori, an old Japanese toy. Cidori is an assembly of wood sticks with joints having unique shape, which can be extended merely by twisting the sticks, without any nails or metal fittings. The tradition of this toy has been passed on in Hida Takayama, a small town in a mountain, where many skilled craftsmen still exist. Cidori has a wood 12 mm square as its element, which for this building was transformed into different sizes. Parts are 60mm×60mm×200cm or 60mm×60mm×400cm, and form a grid of 50cm square. This cubic grid also becomes the grid on its own for the showcase in the museum. Jun Sato, structural engineer for the project, conducted a compressive and flexure test to check the strength of this system, and verified that even the device of a toy could be adapted to ‘big’ buildings. This architecture shows the possibility of creating a universe by combining small units like toys with your own hands. We worked on the project in the hope that the era of machinemade architectures would be over, and human beings would build them again by themselves.

A project to create a new station plaza that would play a leading role in the community activities, centered round an old storehouse, an Oya stone masonry, which was to be preserved.
Debris of Oya stone from the storehouse are reused and combined with steel plates arranged diagonally in order to create attempts to achieve transparency by making the most of the material’s texture. 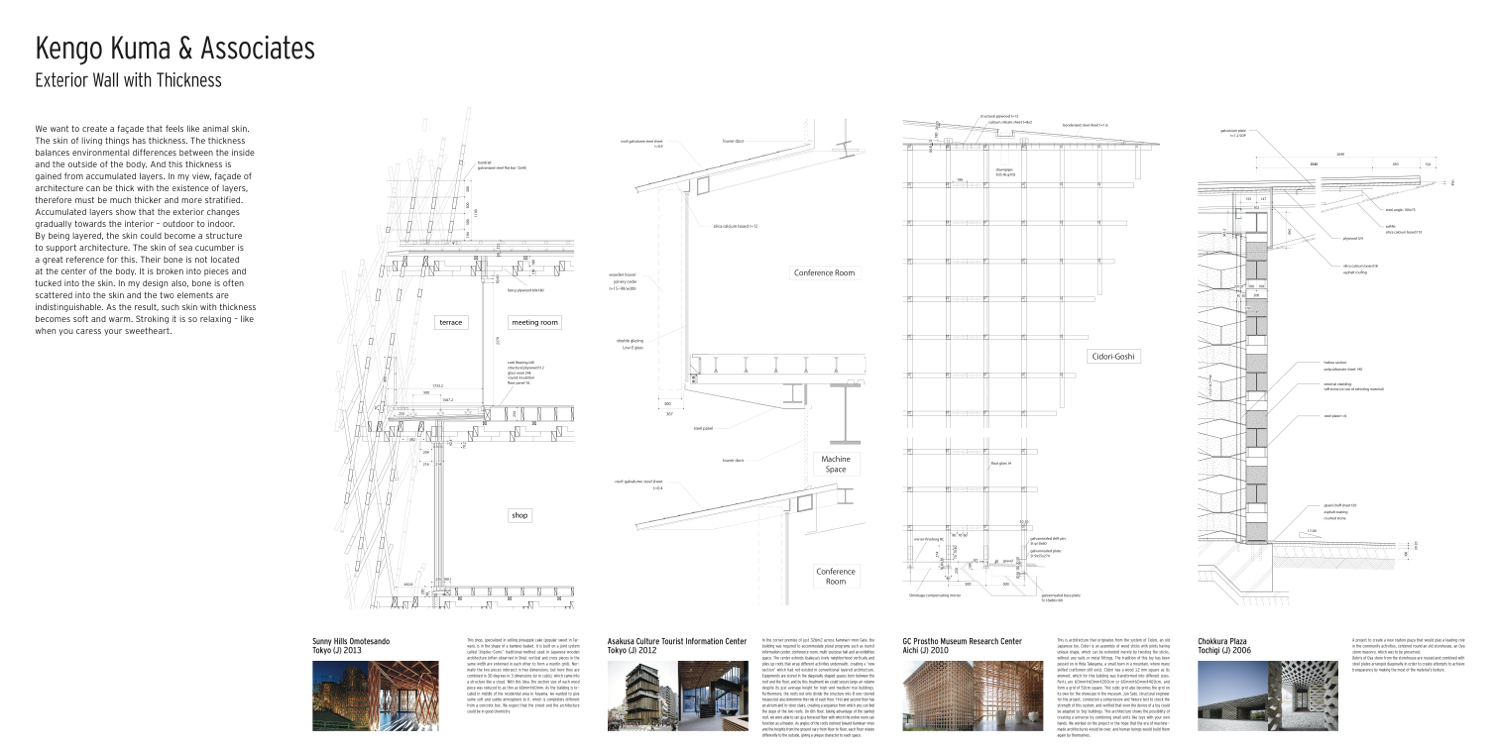