The attention to detail was a critical matter for the Sydney Opera House project. The building was characterised – since its conception – by the challenge of balancing high degree of design innovation and critital technical challenges that required to be solved to ensure the building delivery. Jorn Utzon, the architect responsible for the original design, adopted a strong industrial design approach, which was reflected in the integration between unique design and standardised elements, which could respond, literally, to the declining standard of individual craftsmanship in an industrial age. Utzon’s solution to this problem was to utilise traditional materials (such as concrete, ceramic and crushed stone) in new ways, and import new materials and technologies from parallel industries. This design approach allowed both, the simplification of the individual components, and the extension of the overall compositional flexibility. Due to the high degree of technical challenges in relation to the project feasibility and constructability, and the defined design principles, the attention to detail was a necessity almost from conception stage, as a vehicle to test the constructability of the building, and ensure the delivery of the design intent. The building was constructed in 3 stages, which followed the division of the main architectural elements: Stage I (1959- 1962) saw the site cleared and the construction of the podium; Stage II (1962-1967) primarily involved the design and erection of the roof structures; and Stage III (1967-1972) concerned paving and cladding, the glazing of the open ends of the sails, roof shell interior and building fit-out (Hoare, 1973, pp. 1-3). In each of these stages, the definition and accuracy of details was a way to explore, test, and determine progressively critical design and construction decisions throughout the project. Since the very early stages of the project, the delivery of the Sydney Opera House was the result of an on-going collaboration, exchange of ideas, and problem solving activities between all the professional parties involved. Soon after Utzon won the competition in 1957, a team of consultant was established to undertake the design and development activities on the project. Major consultants involved were: Sir Ove Arup as structural engineer; Steenson &Varming as mechanical engineers; M Balslev as electrical engineers; Sandro Malquist as theatre technique consultant; and Rider Hunt & Partners as quantity surveyors.
Marianna Nigra, Politecnico di Torino

A Composite Waterproofing Systemfor the Roof

The connection detail between the elements of the Sydney Opera House roof was a complex design challenge. The nature of this challenge was to ensurethe watertightness of the joints between the various components thatformed the roof system: the structural rib segments; the tiles supporting lidswith their fixing brackets; and the finishing tiles themselves. The principal layer of waterproofing is the joint sealant between the lid that supports thetiles and connects them to the structure. Between each structural element, there is also a concrete joint, which potential failure over time forced Utzon and his team to define a solution that relied on the use of a custom made lead flashing system, conceptually borrowed from the Gothic cathedrals and the Roman constructions. This solution was a lead sheet placed at the topflange of each segment adjacent to the joint, where an upstand had roundedcorners to receive the lead sheet. A small continuous groove was also provided next to the upstand to fix the side edge of the sheet to the segment.

Once the roof geometry, structure and finishes were established, the infill surface between the shells and the podium had to be determined. After discussions and design process carried by Utzon and the Engineers, A decision was made to rely on the use of a continuous glass façade. The supporting structure of this latter had to be designed in elegant and light manner in such way avoid visual disrupt at the eye level (Sowden, 1972). Furthermore, The structure was conceived to hang from the shell, therefore, despite special allowance was made in the early phases of the engineering process of the structure; re-analysis had to be conducted to ensure that the overall structure performance of the building. These aspects set a number of technical challenges: the definition of the connection to the shell ribs; the supporting system definition and its geometry; the structure; and the type of glass.

The Detail D The Glass Façade

Offers a virtual volume in between four “beacon” like markers. It is a the design developed to solve all the technical challenges of the glass façade was a composite assembly of concrete, steel, bronze, and laminated glass. Each glass panel was supported along its two vertical sides, and has the other two sides joint with silicone rubber. The supporting system was made of an inverted T-shaped glazing bar section and a cover strip screwed on. The combined section would act as a double T-shaped section. This system was attached to the structural element of the steel mullions. These latter were connected to the ribs through a cast to allow the fixings into the roof structure. The mullions were fabricated in two sections. The upper section was bolted to the corbels, while the lower section was bolted to the upper one, and supported at the bottom either by a ring truss or a side truss. The governing geometry utilised was governed by the glass panel shapes, as there was no geometrical relationship between the roof and the podium. 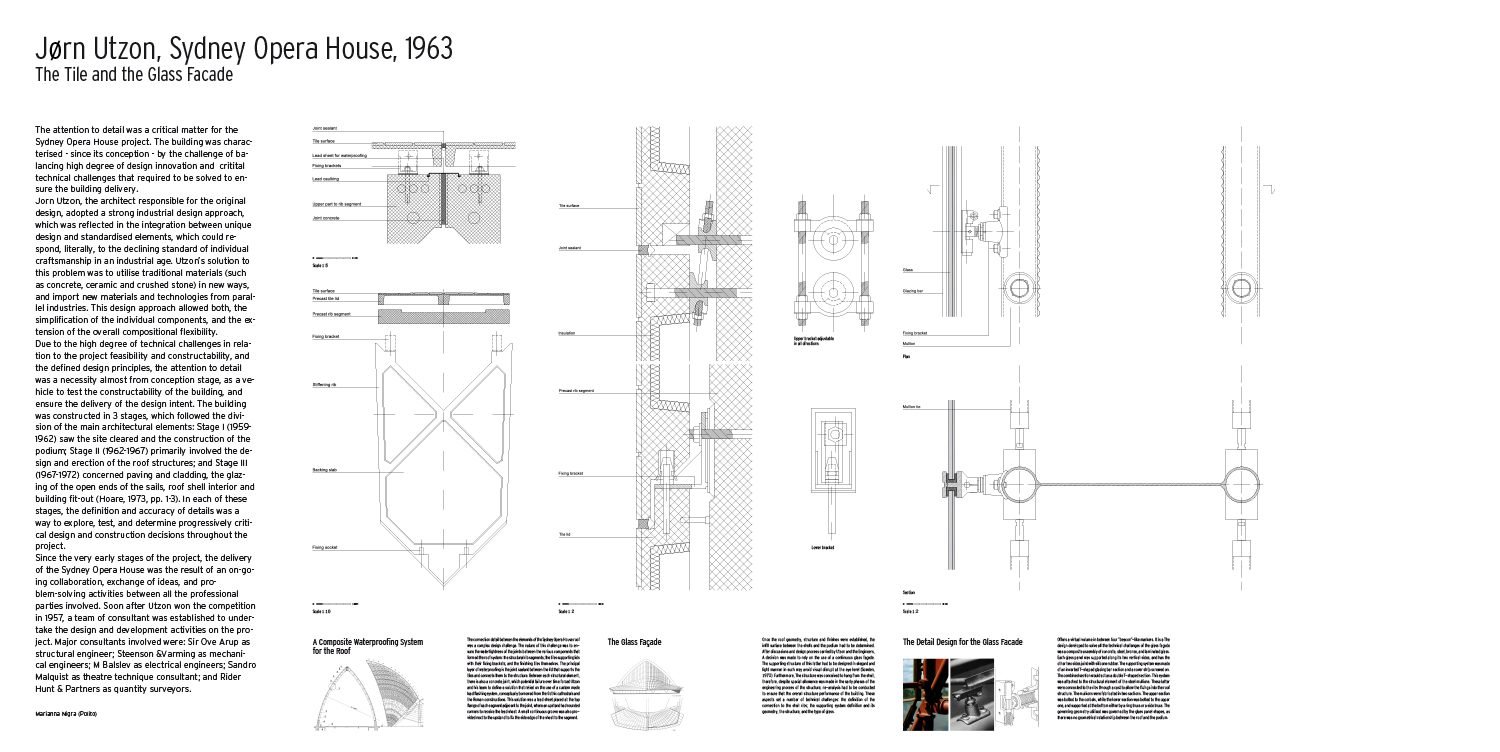