During the post-war reconstruction there was a fruitful exchange between the diverse disciplinary fields of architecture and engineering. Architects however used the repertoires of technical figures provided by structural research (Nervi, Morandi, Colonnetti, Danusso, Musmeci, Zorzi, Favini) without expressing the real structural mechanism which indeed was of great interest to engineers. Architects would bend the structural frame and modify its grid to obtain certain rhythms in the façade (Figini and Pollini in Via Broletto in Milan), expand sculpturally its elements for expressive purposes (BBPR in Turin), or to interrupt its continuity with the insertion of masonry surfaces on the façade (rear façade of the Rinascente in Rome). At the ground level the frame could be further modified with the insertion of portals, V-shaped pillars, brackets or ribs which again might not have an evident structural continuity with the upper part of the building; however these discontinuities and contrasts do characterize the overall design. See the solution of the floor slab of the Regional Council Hall in Trento by Libera or the apartment building in Via Salviati in Rome by Ugo Luccichenti, where at the corner there is a kind of structural bricolage with a tapered structural pillar and brackets intersected by transverse ribs. Just few examples: the V-shaped pillar undergoes a series of morphological transformations if combined with a bracket (see the Nervi’s stadium stands in Florence), if divided into a triangular system of linear elements (bifid pillar, see petrol station in Milan by Favini), if opening upwards for better bearing of the roof load (Y-shaped pillar of the sports hall in Rome by Nervi), if combined in complex systems such as arches or tripods (projects for Montecatini and Naples by Enrico Castiglioni), or shaped with striped surfaces (the pillars for the building in Corso Francia by Nervi).

The house used for Borsalino is one of the masterpieces of Ignazio Gardella. In this work the typological research, the definition of the language elements and understanding of the character of the place resulting in a synthesis that expresses a renewed and significant presence of the residential building in the city. The definition of the prospectus is a rhythm problem, in which Gardella research a braking simmetry and a continuous variation of the prospectus, obtained by the sliding of shutters. The window-to-ceiling increases the feeling of openness due to the absence of the lintel. The flat roof of considerable overhang, definitely marks the end of the building, with its regular rhythm of the ribs, in the midst of which there are ribbon windows of the floors. The coating is klinker tiles.
Matteo Callegari – Casabella n. 199, 1952

By elaborating on his work in Milan, the solutions for the façades in Monza included four different styles: an opaque reinforced cement panel, wooden window and door frames and a loggia/balcony with a metal parapet. The plan is totally free (the only exception being the stairs and elevator shafts), the user is again free to choose cases this was decided on by the builder.
Giacomo Arillotta – Stefano Guidarini, Ignazio Gardella, 2002

Rising a short distance from the Basilica of Santa Maria Maggiore, this store and office building is a magnificent exemple of how to fit a modern structure into an historical context. The block presents a number of air shaft around which are grouped corridors and stairways. The reinforced concrete structure forms a triangular gridwork. The outer facing is metal, with aluminium riser, pink enamelled panels and electric operated window shutters (now removed). This is unquestionably the boldest and best commercial building erected in Rome after the war and the first example of an italian way to design curtain-wall.
Elena Sentieri – L’architettura. Cronache e storia n. 9, 1960

La Rinascente is a commercial building located in the Town Hall II, between the Via Salaria and Corso Italia. The string courses advance to the facade thus giving the effect of three-dimensionality of prospects. The value of the string courses molding is accented by frames, channel lighting, and gutters. All metallic elements that emphasize the horizontality of the building. A balance vertically, there are ripples rising from the bottom to the top of the facade boards which receive the air-conditioning ducts, downspouts and pipes of the sprinkler system. Six windows are placed symmetrically on the main front.
Andrea Bocola – La Rinascente. Albini-Helg., Milano-Abitare Segesta, 1982 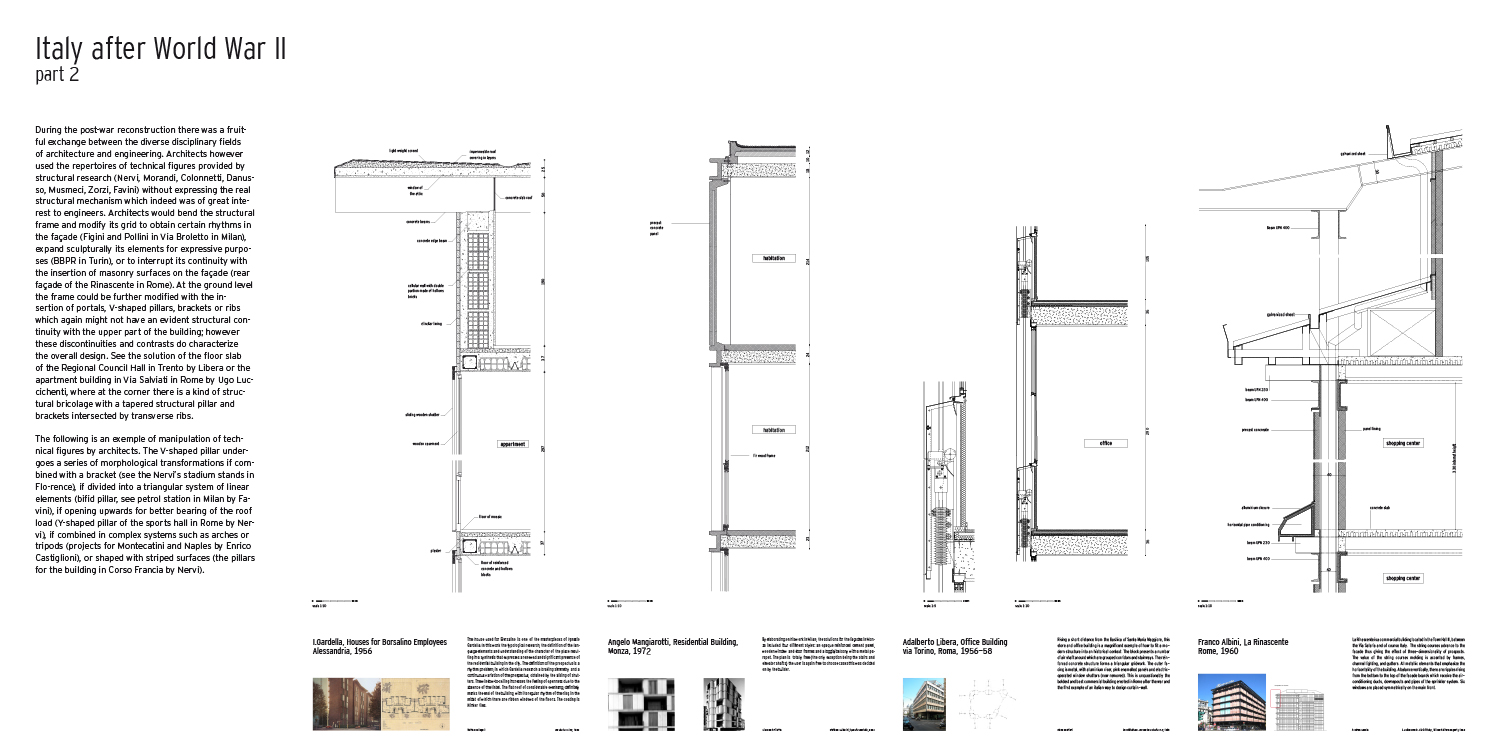