In the course of the 20th century, the reconstruction years after the war and the following economic boom constituted one of the most prolific periods of Italian architecture thanks to the particular relationship it was able to develop with industry and technology without neglecting its own traditions and the legacy of the great modern masters. In an essay written in 1955 Pier Luigi Nervi observed that the emergence and development of building science had “democratized and popularized the static issue” but it made also available – we note – a modern language based on iron, glass and concrete to a widespread anonymous designers of relevant quality. One could witness the rise of a sort of modernist mannerism whose distinctive feature was a its elegant design and an appropriate use of what industry and technology were bringing to the construction site. The architectural panorama was variegated by the presence of a vast number of skilled professionals whose names for years have been relegated to the role of marginal figures of Italian culture (Moretti, Monaco, Luccichenti, Hunting Dea). An industrial network accustomed to work with artisanal quality (i.e. FEAL, Secco & Sons, Curtisa, Malugani, SCAC, Garboli, Badoni) offered to architects the opportunity to decline various themes of the international language (curtain walls, thin shell roofs, reinforced concrete structures) with a detail accuracy very close to industrial design production, a field that made Italy internationally renown in the same period.

The building made by Ignazio Gardella can be seen as a crystal which deforms according to the shape of the soil, without however losing its geometrical rule based on the triangular form.
Inside, a particular attention has been paid to the problems associated with large horizontal development. To avoid the feeling of a space excessively dispersive, Gardella resort to the use of decorative elements as “centers of attention” such as the choice of keeping in view the cooling channels. Outside, the building is distinguished from the unifying of the balconies jutting out that interfere with the tight rhythm of the vertical pillars in front. The iron railing, fixed above a band of coating botticino marble bush hammered, helps to confer to the building unit.
Fiorese Francesco – Alberto Samonà (ed.), Ignazio Gardella e il professionismo italiano, 1986

The building is characterized by a structural mesh metal to trend horizontal, with an aluminum frame to view painted in gray and large windows vertical cut. The curtain walls are made of prefabricated building elements and mounted on the supporting structure with specific attacks. The ground floor is entirely devoted to trade and overlooks the street with huge windows transparent, marked by slender pillars, which are taken up and thickened in the rest of the facade.
Claudio Vianello – Casabella n. 230, 1959

The two dwellings, one over the other, have the living and bedroom units joggled as well as the two entrances opening in the opposite fronts. The lenghtwise section shows that the lowering of the entrance hallway allows the joining of the living and dining rooms in the top section. The building is all exposed brickwork with exposed floor curbs. The supporting brickwork differentiates from the filling in walls by the different brick patterns.
Benetazzo Marco – Casabella n. 226, 1959

The general layout of the project is quite innovative if it relates to the traditional iconography of places of worship; in summary, it is a building with plant concentric circles of offset axis, through which originate in the porch perimeter, the altar, the women’s gallery, the pulpit and baptistery. The supporting structure is made up of sixteen reinforced concrete pillars left to support the view that tiled roof channel, soffit punctuated by as many radial beams welded by a continuous loop, which arises under a window with bright tape that causes a break between the building and its coverage. The perimeter walls are built of brick, is left exposed to the outside and inside the church, where there are curved walnut panels used as a backdrop for the gallery.
Adelaide Merlin – F. Irace, V. Pasca, Vico Magistretti architetto e designer, 1999 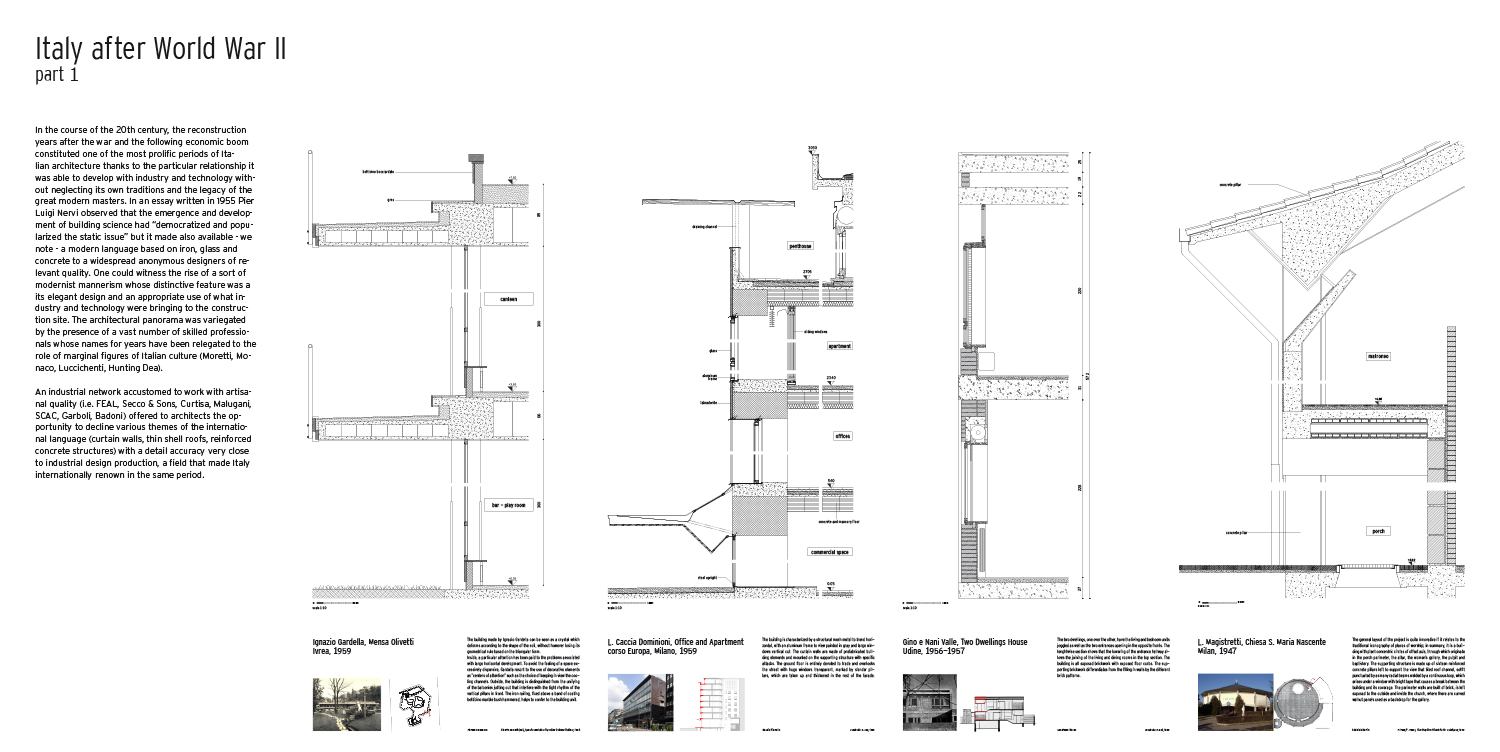