Between 1947 and 1953, Ignazio Gardella realized a series of residential buildings, where the crowning theme is expressed through variations on forms, elements and construction details.
The house for Borsalino’s employees in Alessandria, the Tognella House, also known as “Casa al Parco” and the house in Via Marchiondi in Milan, present three alternative solutions to the parting of building and sky.
The Borsalino House is a flat roofed building accentuating its rationalist character but presenting also a deep shadow at the roof edge which recalls a classical cornice overhang; on the contrary the building edge of the Tognella House is attenuated and hovering in the air: the result is the famous and delicate “halo”, recently lost in the renovation of the building.
In the case of the House in Via Marchiondi, the modern flat roof is definitely abandoned in favor of a more ancient pitched one, although modeled by loggias and terraces that accentuate the freedom of the internal spaces.
The expressive power of the building arises from the opposition between “heavy” and “light”: cantilevered floor slabs project southwards towards the garden from the rear part of the building clad in clinker, they are horizontal lines above which the window frames keep their own rhythm. The lightness of the façade contrasts with the heavier mass of the volume behind, this is obtained by working on the type of moulding that completes the slab edges; this details is both a technical element enclosing the gutter as well as visually diminishing the thickness of the slab.
In the Padiglione di arte contemporanea Gardella carries the same idea into a public building: the sequence of spaces, compressed in the interior and expanding towards the garden, is expressed by a separate element which defines the edge, creating a heavy shadow contrasting the flatness and the baldness of the façade.
Orsina Simona Pierini with Mauro Sullam, Teodora Yordanova and Lorenzo Micucci.

The Gallery is formed by one main volume which hosts three different spaces, articulated by the changes of the floor levels and by an integrated system of skylights.
On the garden façade, the glazing has been inserted between the columns and protective iron grates can roll in front of the windows with a counterweight system. The facade is externally clad with glazed ceramic tiles in a plum color. The building is characterized by a steel frame and wired glass slabs, underneath which horizontal double-layer aluminum slats modulate the light in the space below.

Residential Building in Via Marchiondi
Milano (IT), 1951-53

The idea of stacking villas on each floor is strongly expressed by the horizontal slabs that run on the garden façade. On every floor the recessed windows and two bow-windows made of steel are not vertically aligned and express the different interior structure of the flats, two on each floor. The penthouse flats have two levels, with the upper one lit from terraces carved from the inclined roof. The walls are clad with clinker tiles where waterproofing is needed otherwise by rose colored plaster. Metal balustrades are fixed to the terraces’ stone floor where the eaves flashing system collects the water to the two rain pipes, marking the edges of the main front. The image of the full length sloping roof retains the freedom of movement expressed in the front toward the garden.

House for the Borsalino’s employees
Alessandria (IT), 1950-52

The narrow building is developed in height, expressing the verticality through slits in the apartment plans layout and in the choice of narrow vertical windows.
The wooden window frames span from floor to ceiling and are divided in three parts with a fixed one at the bottom. On the exterior there is a sliding shutter system.
Windows, inserted between the roof beams, illuminate the attic. The ventilation of closets and cellar is obtained by inserting perforated elements in the exterior cladding. Exterior walls are clad with square brown clinker tiles.
The building has roof beams placed transversely and tied by a waterproofed reinforced concrete slab. 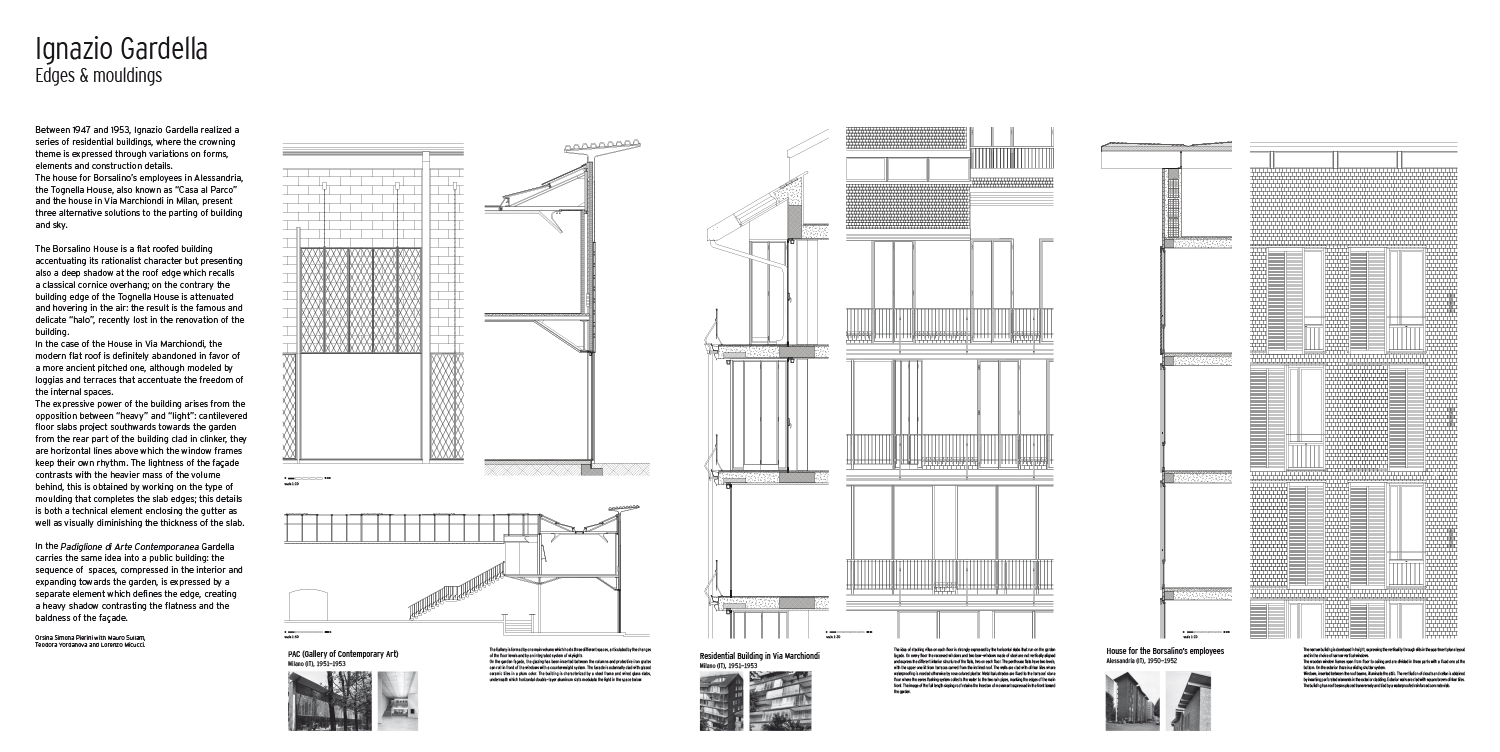