The Amsterdam Exchange is composed by many spaces, each one involved in a strong determined function and characterised by a different structural solution. Berlage developed them in a close dialogue with engineers, experimenting the most evolved building technologies of his time, to whom he added a vivid colour system that create a visual connection between elements in steel and the ones in brick (painted in different colours too).

In the main hall the steel beams support a pitched roof, whose glass ceiling well enlightens the space. In the grain exchange there is a system of steel trusses, the first crossing the hall and bearing the sheds, the second following the perimetral wall and strengthening the whole construction sustained by the joints. In the foyer the glass ceiling is supported by arched trusses. In this case the joints are placed above an elaborated stone cantilever. Finally, in the conference hall there is a flat wooden ceiling supported by wooden beams placed, like the steel trusses, above cantilevers, that represent an intermediation between the horizontal beams and the vertical wall.
In the grain exchange, the perimetral wall is articulated by pillars bearing the roof construction. The hinges have a strong plastic shape, which seems to lift up the structure above like a base of a sculpture: it seems that Berlage puts the technological element of his building in a favourable position to be immediately admired by visitors.
The void between the beams and the brick wall underlines the prominence of each element of the structure giving them a stronger presence due to a play with light and shadow. Therefore all elements seem to be detached and autonomous each other, almost freed from any functional goal.
Giulio Galasso (IUAV)

The Exchange building consists of three principal spaces: the goods exchange (that is the biggest with a surface of 45×22.5m), the grain exchange and the stock exchange (both with a surface of 38x19m). The strong presence of the brick wall with very light colours makes the room the brightest space in the building, also thanks to the skylights orientated to South. The continuity of the two longitudinal walls is interrupted by full height pillars, which create a strong rhythm together with the steel trusses supported by them.

The wood trusses and the textile cladding are the characteristics of this very rich space, which Berlage conceived to host Chamber of Commerce’s reunions. The darker colours, joined to the precious adorned windows, correspond to the artistic will of recreate a medieval space. The wooden covering consists in a very light structure formed by main cross beams supporting the ceiling.
Considering the other spaces covered by steel trusses and in front of the material qualities of this space it emerges the attempt of Berlage to handle not only wood, but brick and steel too with the same craftsmanship and accuracy.

The foyer is the room that joins the three big spaces conceived for exchange activities. It appears as a rectangular space with a transparent arched coverage giving them the appearance of an inner court in the heart of the building. Originally it hosted telegraphs and other communication instruments which could be used from all the traders. Also for this space Berlage designed a particular kind of beams, which confers him a specific physiognomy.
The block of white stones sets into the masonry have both the function of protecting the masonry where are the openings and to enrich the wall surface. In some cases stone is used to complete a kind of drawing in the brick texture, without a structural function. 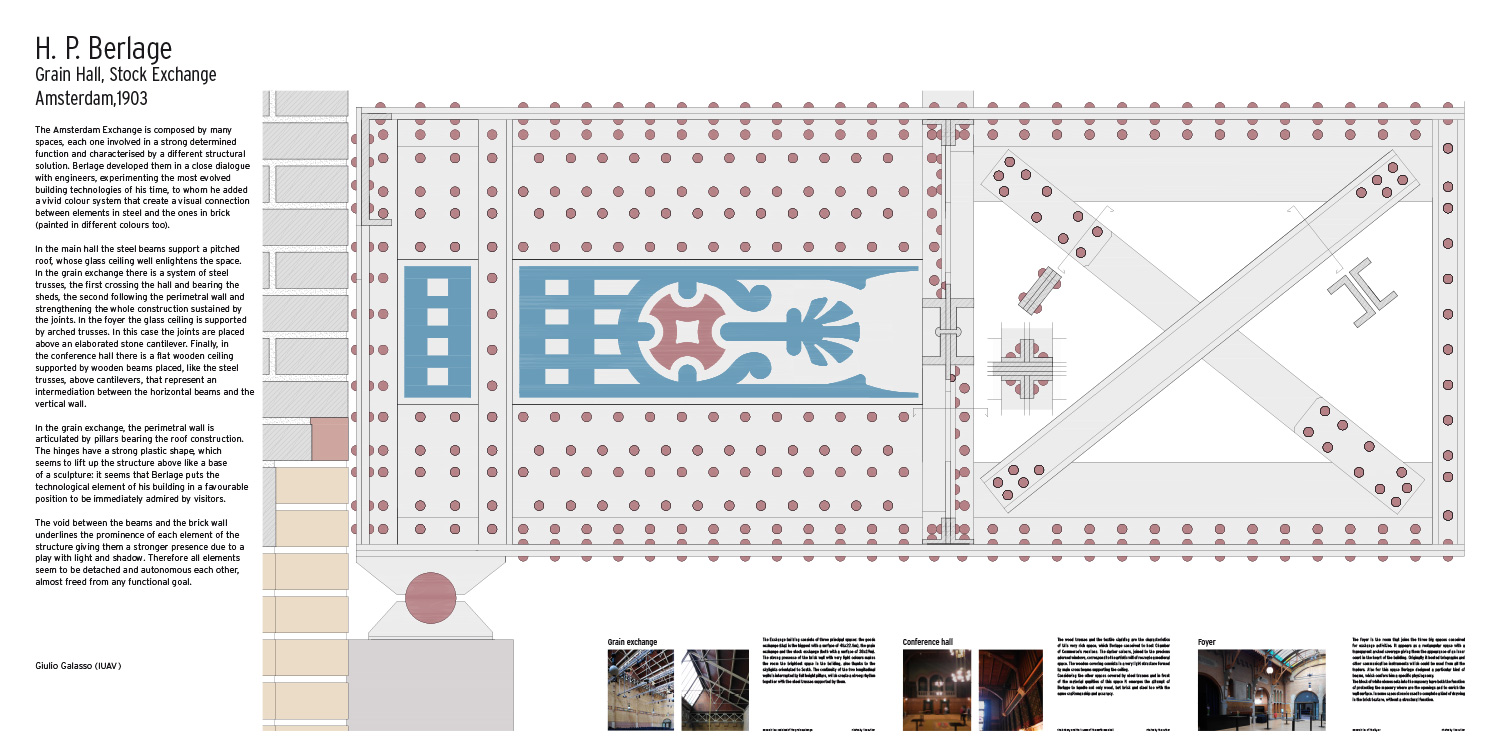