Universita’ Luigi Bocconi
Milano (Italy), 2008
Conceived as piece of city fabric, this University has been described by Kenneth Frampton as a “City in Miniature”. We thought of the university as a place of exchange, a marketplace of ideas. The requirement was for research offices for 1000 professors with conference facilities for 1500 people. We held these two worlds apart and allowed the life of the city to enter into the world of the University.
The carved ground and the erupting Aula Magna makes the heavy base.
The offices float above as beams of space allowing light to penetrate the mass and depth of the building. The large scale structure allows the life of the city to visually connect with the more private world of the professors. East west corridors form double wall beams every 25m. These wall beams support the roof structure from which we hang the office floors. This eliminated divisive transfer structures and allowed us to manipulate the soffits of the offices in order to make a rich sequence of public spaces below.

Offices for the Department of Finance
Dublin (Ireland), 2008

100mm thick planks of sanded Ballinasloe limestone are crafted to form deep stone screen walls. Windows integrate grilled ‘nostrils’ which breath in natural air, which in turn is distributed into the office spaces. The air is then drawn into the six chimneys, which are placed centrally in each floor level. These chimneys continue the tradition of the roofscape and skyline of Dublin. The main staircase, positioned at the front of the building, acts as a screen to the south sun and as an acoustic buffer to city traffic. Circulation to the offices is positioned at the perimeter of the building, with offices placed away from the facades. This building is unusual in a city, in that it has windows on four sides, benefiting from the varying seasonal path of the Irish sun. Each window frames a panoramic view out over Dublin, providing a type of democracy of views of the city.

Brick follows through to the residences from the existing accommodation buildings behind. Here the material is given depth and the facades deeply carved providing a form of threshold between the domestic interior and the public space that they overlook. All living spaces address the public space to the south east with the more private study bedrooms facing north east or north west.
The undercroft of the residences is carved away providing archways allowing pedestrian movement from the carpark and bus park to the north as well as forming sheltered social spaces for students. Large gateways open into the entrance courts of the housing blocks where stairs, lift, bicycles bins and common laundry facilities are.

The University of Limerick, in the South West of Ireland occupies a large territory, and is situated on both sides of the river Shannon.
The new buildings consist of a medical school, three blocks of student housing and a canopy / pergola forming a bus and bicycle shelter.
Limestone is used to represent the ‘formal’ central medical school, making reference to the limestone territory of County Clare in which this side of the campus is located. The stone wall is folded, profiled and layered in response to orientation, sun , wind, rain and public activity. A colonnade to the south and west corner acts as a gathering and entrance space. In contrast the north and east walls are more mute.
In response to the deep plan, the roof-form is modulated to light multiple spaces, including the central circulation space, the clinical skills labs, the corridors, and a small roof terrace.
An open central stair connecting all of the primary spaces, threads through all levels of the interior, designed as a social space with enough room to stop and chat or lean on a balustrade / shelf and view the activity of the entrance and other spaces above and below. 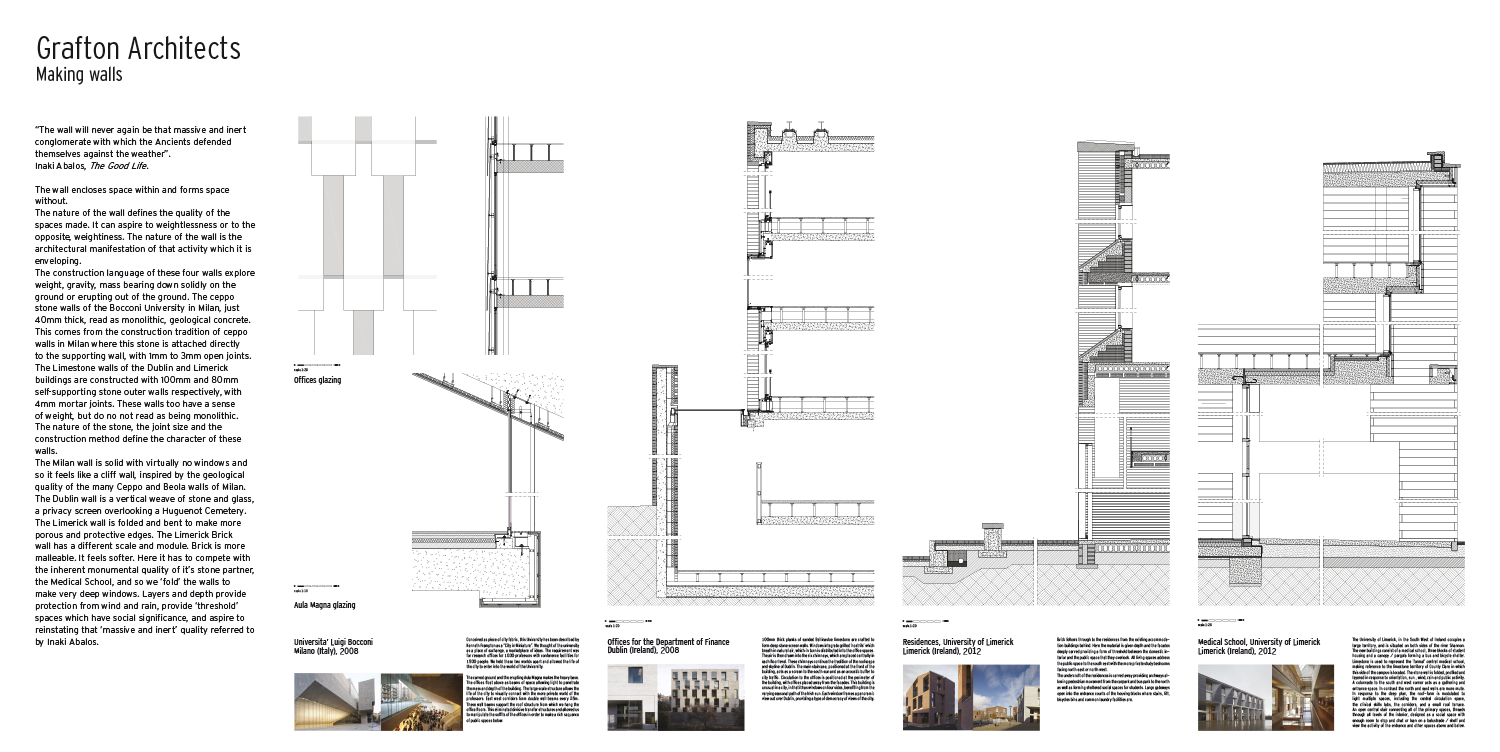