Sáenz de Oíza won the competition for the new tower of Banco Bilbao in 1971, and built it between 1975 and 1981.
“We want to escape from any rhetorical reference and from any “facadisme”. If we ought to think of a rule, we would think of a mathematical or electronic code.
This building is not beautiful or horrible. It wants to be judged as a structural invention. […]
We must know that we are taking an architectonic decision, not just proposing a functional or structural solution. We want to stack 30 floors one on top of the other to propose architecture as a service to humanity, we want to built a stack of 30 stimulating spaces, we want to build 30 atmospheres”, says the architect in the competition project summary.
The idea was to achieve a tower, 30 levels high, with 30×40 mt of floor surface each level, located above the railway tunnels crossing the Paseo de la Castellana.
A dome spans the width the tunnels and it is supported at the perimeter. Above the dome there is a giant structure supported also on the perimeter where there are large portals. In each giant four floors portico there are other three suspended floors for offices, leaving the fourth one free of pillars.
The proposal developed two different layers: a macrostructure contrasting the main gravitational forces and a smaller, lighter, structure subdividing the spaces. The first one repeats every four storeys and it is made of reinforced concrete, each floor is hanging from it and it is subdivided in various spaces by steel structures. The structural system was designed by Fernandez Casado.
Orsina Simona Pierini, with Mauro Sullam, Nicolas Baglioni and Luca Mazzucchelli

“A footprint sunk into the earth in a concave circle”.
The idea of sinking the tower into the earth is strongly expressed by the way Oíza designs the ground floor: a heavy marble basement is located all around the site, far away from the main building, making the visitors enter into an underground space. The ground floor is empty, there are only entrance lobbies and stairwells and the facade doesn’t reach the ground. To reach the entrance of the building visitors have to pass underneath the facade, a metal shield hanging over their heads.

In addition to the structural choices, Sáenz de Oíza cares for the quality of the interior spaces: the windows are protected by metal sun shields that mediate between inside and outside and define the building’s facade. The technical levels became also an opportunity to position the auditorium or the meeting rooms, giving a rhythm to the facade. 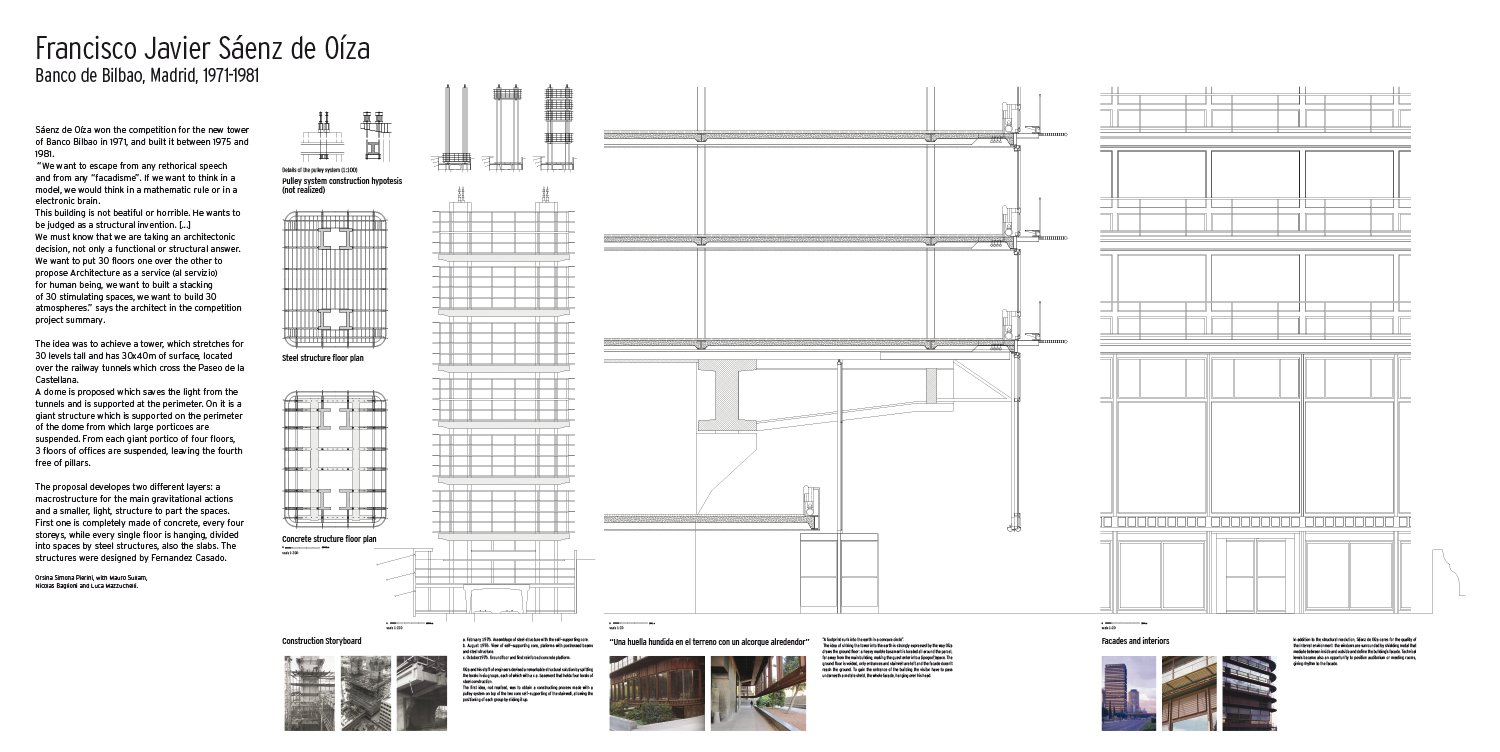