Matter, our awareness of it, what we experience when we use it, generates a dialogue which is capable of creating stories. It is with these stories that I like doing architecture.
Progress – a sacred word in our contemporary world – has begun a headlong rush into the unknown which is separating it more and more from the tangible. This distance makes me uneasy.
With regard to architecture – we are growing further apart from the energy of our body’s forces and from tangible matter. It is normal to relate the functioning of a door with the gesture of pushing it to go in; one can feel the weight of the door, its materiality. When the door opens by its own as one walks by, you remain indifferent to its materiality; the understanding of the mechanism which opens the door is left to whoever controls its functioning.
We are also growing apart from the dialogue that time establishes with objects. If I think of wood, I know the traces left by time, I can value them, make them stand out. A stone establishes a dialogue with time; moss is formed, it varies in colour, it changes. Its surface tells us its own story. Nowadays we tend to use more materials which are not able to register the passing of time without losing their identity; a glass which has become dirty with time and has lost its transparency, has also lost its essence. In general, the materials that come with progress do not age, they simply deteriorate.
I defend being able to dialogue with everything: time, the forces of nature, matter, people… Dialogue as the possibility of a relationship. Relationships originate only through dialogue in the same way that dialogue originates only through relationships.
Carme Pinós

In this building we wanted to create well-ventilated offices with natural light. Even making the air-conditioning unnecessary thanks to a design that takes advantage of the mild weather in Guadalajara.
The built area was fixed but not the height of the building. We opted for a high-rise building developed from three central concrete cores, which contain all the facilities and vertical circulations. These cores work as pillars and are the only structural support for the building. Large cantilevered beams of various dimensions support post-stressed, column-free slabs. Thus both, office modules and the parking area, are free from obstacles.
The centre of the building –the area between the three cores– is an open space which is lit sideways by removing three floors of the office modules on each side. These large gaps become “windows” for the central space and allow the free cross ventilation.
Externally a skin of wood louvers mounted on sliding panels act as sunblind; the vertical flow of air is permitted while the heating of glass is prevented.

It can’t be denied that a tower has always a will of singularity and that its sculptural value is its most precious asset.
In this case, we don’t want to disconnect this sculptural value from its structural expression; we believe that any balancing act which its way of working is easily understood, responding to a carefully measured calculation, will reflect a tension that is, at the same time, harmony.
The building is really close to two towers very similar in height, so we try to make it stand out by inclining it towards the main street, this balancing gesture is the expression of our project. We start from a parallelepiped shape, two sets of concrete bulkheads form an acute angle and divide the building into 2 triangles freed from interior columns. These bulkheads are the main structural element. An inclined girder dismounts the façade columns on ground level in order to make the entrance to the building. This girder’s geometry gives the tilting for the façade’s “brise-soleil”, seeking with this inclination an image of slenderness. Our formal expression is following these balancing games, which are a result of tilting the tower forward and creating a façade with lines non parallel to the ground.

Department Building of the new campus of the University of Economics
Vienna (A), 2014

We could define our project as a game of parallelepipeds which resolve in a systematic way a repetitive program at the same time that it tries to create public space.
This game allows us to connect the two buildings planned in the master, making the street go underneath them without adding a new section or connecting footbridge.
The facades’ formal idea is the contrast of two different systems.
The departments’ facades are plastered, finished in a light color and different textures, the openings are placed in vertical bands, recessed one to another. Each window is provided with a shutter of perforated metal. These vertical shutters work as sun protection while offering different perceptions of the building according to the various points of view. The façade planes of the corridors are finished with expanded metal. These metal planes are a background for the plaster facades; they differentiate the various parts of the building while breaking its excessive length.
The east and west facades are opaque: plastered in a dark grey.

We started the Project considering two challenges:
First: a building capable of “making the city”, by its singularity as well as by the public spaces generated.
Second: a building that connects with the city and the new park through remote perspectives as one goes through it, but at the same time it should provide introspection in the exhibition halls.
These two ways to approach the project are solved raising the exhibition halls in order to free the ground floor so the more open and transparent areas, such as the lobby and the shop, can be placed there. Our intention is to generate public space, taking the park towards the city and through the building; a space that will be lit at night with drawings coming from the metal sheet façade’s perforations. This metal sheet is also hiding the main structure supporting the elevated exhibition halls. The two suspended halls are facing each other on different levels so that, once outside, the city can be seen above or below the other hall. We think that some relax areas should be placed in between the exhibition halls and this is why the connection between the halls is solved by escalators, a type of path that allows distant views, instead of elevators that take us out of context and don’t offer the decompression needed between exhibitions. 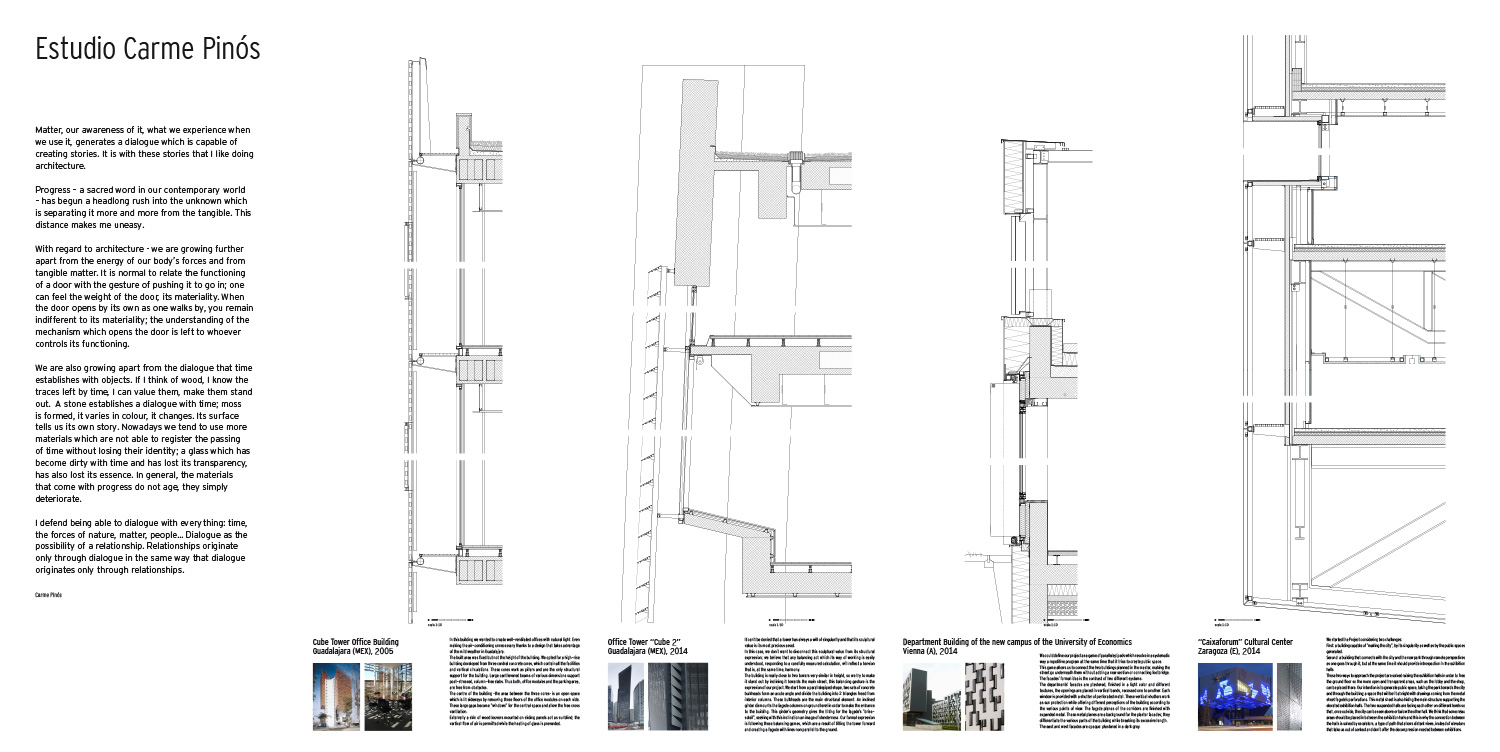