One of the challenges -i.e., one of the opportunitiesof an architect’s work resides in his or her ability to work on several overlapping, multiple planes at the same time.
The diversity and complexity deriving from these overlapped planes is not the result of an exercise of will, nor even intuition: it is a consequence of our time, yet another echo of the life we have the chance to lead. Having lost faith in the power of volition -individual and collectiveover reality, the architect’s work takes refuge in outside thought, in estrangement,
to be able to reach for a type of creativity we now feel is absent from architecture. The architecture of our times is not characterised by volition, but rather by expectancy. The difference between these apparently disparate attitudes resides in the point or points considered by each individual to contain the path to the formal and material definition of what is constructed -for us, ‘boxes’ and ‘potatoes’ are not so different in terms of their procedure.
Some think that the transition between ideas and objects resides in diagrams, in pixels, in statistics, in flows, in random processes, etc., while others suspect that in the systems we can find hidden effervescent laws which permit the imposition of variations on the mechanisms themselves… And in fact in today’s architecture, place, function and technique are no longer the parameters that release form, but rather the opposite: once a law or an approximation is established, these are precisely the questions that define the form. In other words, given an abstract system, laws or diagrams, there is a second point of the process when an important role starts to be played by aspects such as context, function and technique which, according to the positivist culture of the last century, produced architecture.
By delaying the input into the process of the fringe-of-reality conditions, we are safeguarding the potential of the idea which is thus established by the specific conditions. More significantly, it can be changed infinitely yet remain the same idea even when the real conditions change. (A funnel turns into a shower when they exchange positions). Given the certainty of modern mutability, it seems logical that architecture should distrust the borderline conditions as the starter motor of the project and delay its input to the process, to a point where it brushes or collides with the actual abstract idea, turning real problems into opportunities and orientations for the definition of the form. Having a starter motor that is unrelated to the borderline conditions permits the establishment of rules, a field of action which distils a set of open laws. From this point onwards, not everything can be a fact, but what can be made is infinite, and we only find its form in the brush with reality (Paradoxically, the limit is where freedom multiplies, because with reduced number of possibilities, we not only find ourselves forced to wring out what little we have, but unexpectedly, we discover hitherto unimaginable paths).

Outside twon, and beneath the overhang of he wall facing the River Duero, the Museum present itself to the town as a casket containing its jewels, its memory. the Museum is like a trunk cut at one stroke in wich a host of sky-lights, all of the same cross-section, define various spaces throught their different positions, heights and orientations. The Museum is organized as a tour throught the remains of history, a tour wich takes a Celtiberian votive stele exhibited in the Musum as its formal reference.

The new construction materialises externally like a great basket composed of prefab concrete girders.
Due to the proximity of the water table, the building is raised above ground level. The Swimming Centre is on the first floor, leaving the ground floor of the new building for storage and facilities. This solution mitigates the problems caused by the proximity of the Henares River, and makes the main hall predominate over the degraded surroundings while providing a clearer vision towards the horizon and the nearby mass of trees from inside.
The building blurs the edge of the construction: by day, the hall and the lobby receive sunlight through the filter on the facade while at night, the building looks like an illuminated beacon, a waning reference point for people strolling along Pine Walk.

From the outset of this project in the 1994 public competition proposal, the powerful, ominous open spaces of the former El Aguila brewery, unknown to the public, were the driving force for the arrangement of the different activities through the construction of voids, interfaces and expansions of surface areas as part of an effort to visualise an exterior space which modernism regarded as a mere void. The space between the buildings has thus become the definition of the line, upgrading multiple itineraries, planes of activity and information that change the linear nature of the unit as a whole, establishing invisible links between the different constructions with their industrial scale and materials.

MUSAC is a new space for culture, regarded as something that visualises the connections between man and nature.
A cluster of chained but independent rooms permit exhibitions of differing sizes and types. Each of the jaggedly shaped rooms constructs a continuous yet spatially differentiated area that opens onto the other rooms and courtyards, providing longitudinal, transversal and diagonal views. Five hundred prefab beams enclose a series of spaces that feature systematic repetition and formal expressiveness.
Outside, the public space takes on a concave shape to hold the activities and encounters, embraced by large coloured glass in homage to the city as the place for interpersonal relationships. 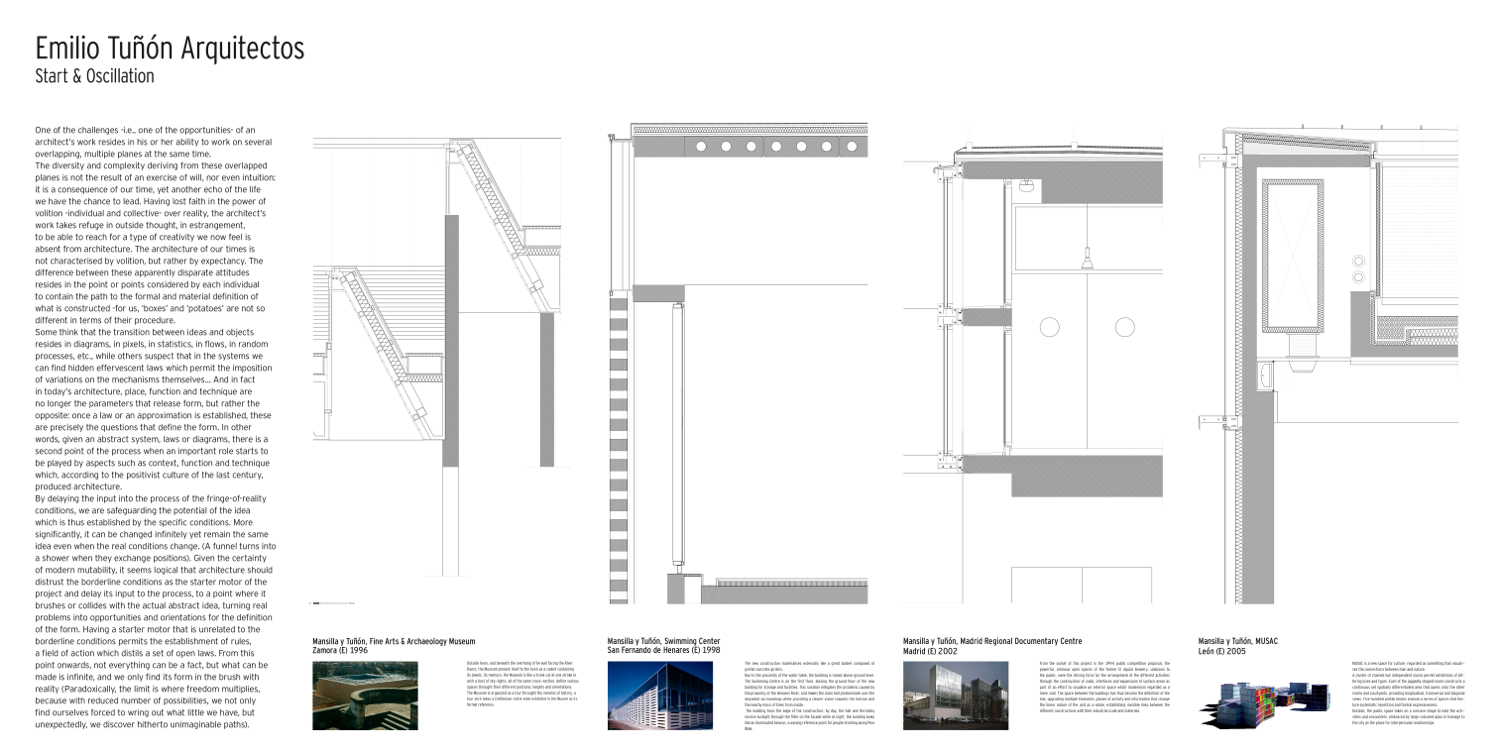