The creation of architecture is undeniably an act of authority. Our impression of architecture is usually one of something heavy, immobile, dense and complex.
It separates the land and physically creates division. For Dominique Perrault, the challenge is to change this, to eliminate heaviness: to design walls that allow one to see through it, allow air to flow through it, and give one the impression that inside and outside are open to each other. One way he meets this challenge is by manipulating scale through the selection and implementation of materials.
One material that possesses such fantastic properties is metallic mesh. It has a certain hardness and resistance that offers shelter, since that is architecture’s main role, but it also has a wonderful poetic and quasi-immaterial quality. The dialectic of this material interacting with the environment causes a building to appear then disappear, to be present then absent, and to be opaque then transparent.
This possibility of transfiguring architecture can be achieved thanks to the effects produced by metallic mesh in natural or artificial light, to its transparency, translucency and softness. Façades, walls and ceilings are not only separations but also places of transition, whose transparence accentuates the idea of visibility. Metallic mesh can be used topographically to engage in a dialogue with the things around it in order to protect, to welcome, to create in-between places, places with a certain depth which allow us to manage the interplay between public and private, between outside and inside, between the urban magma and the private sphere.
The main objective of Dominique Perrault’s architecture is this aesthetic of disappearance.
Many of his buildings offer examples of the way he implements this theory. The Bibliothèque Nationale de France appears as a hollowed out space with only its four corner angles protruding; the Olympic sports complex in Berlin sinks into the ground, allowing only its outline to appear on the surface, enhanced by the visual aspect of metallic mesh; with the Grand Theatre of Albi, Perrault is playing with the effects of immateriality on its façade; and the ceiling of the main courtroom of the Court of Justice of the European Union in Luxembourg is attired in indefinable layers of moiré and luminescence.
Perrault imagines and develops details designed to achieve his purpose. They enable him to implement metallic mesh in a way that erases and dematerializes his architecture, overcoming its quality of static object.

Court of Justice of the EU
Luxembourg (LU) 2013

Moiré effect on the ceiling. Inside the complex, the major element intensifying the prestigious atmosphere of this institution, facilitating user orientation and strengthening its identity is an anodized gold-tinted aluminum mesh. Different types of this mesh clothe the façades, ceilings and walls of the building. On the lower level, the courtroom ceiling is encircled with lights draped in a golden mesh bestowing a majestic and authoritative atmosphere upon the chamber while also providing a measure of poetry and lyricism. The long panels of fabric are suspended from main ring of welded metal tubes at the center of the courtroom and extend outward to the walls, where they are clamped in place with eyebolts, and are fixed to the ceiling with adjustable metal shanks. Two layers of metal fabric form surfaces, hanging from wall to wall and wall to ceiling, an arrangement that could only be achieved with large, unified and seamless pieces of woven metal. They highlight this architecture of appearance and disappearance, creating moiré effects and effects of luminescence, thus enhancing the importance and richness of the functional aspects of the architecture.

Uniformity of the roof. Two buildings for a sports complex the velodrome and Olympic swimming pool appear like two lakes in the landscape, covered with a giant cloth of metallic fabric. Its radiant and watery reflections vary with their specific geometry. Both arenas one round and the other rectangular are covered by a massive steel roof framework. Their façades and roofs are clad with large swaths of the same metallic fabric, which is made of woven pieces of stainless steel cable. The roof’s slightly undulating metallic mesh is held in place horizontally with powerful steel springs, and the façade consists of overlapping pieces which are fixed by steel plates. Only the roof lights lie on the same plane as the metallic mesh pieces. Thus, the roof remains an unbroken, seemingly homogeneous structure. The uniformity of the stretched, thick, gray fabric is achieved by draping the whole building with a metallic cloth, which, while creating the appearance of a solid, also interacts with changing perceptions of light and shadow to both appear and disappear.

Transfiguration of the wall. The Bibliothèque Nationale de France can be described as a piece of urban art, which offers a virtual volume in between four “beacon”-like markers. It is a major example of the aesthetic of the disappearance of architecture. The idea of covering the walls inside and outside the library with metallic mesh literally transfigures the wall. To change the face and nature of objects, the use of metallic fabrics makes it possible to replace the physical and the concrete with fabric and texture. The resulting transfiguration is intensified by the many qualities of this material: its dense structure, the way it can be stretched and folded, the way it shimmers, and its iridescence and graphic texture. In the case of the internal stairway, large panels of metallic mesh are suspended at a distance from the concrete wall and cover the acoustic panels in between. Technical services can be hidden behind this intervention. The architectural design follows the same principle as for clothing: the independence of clothing from the body creates a space of relation while it also separates them.

Dematerialization of the façade. The Grand Theatre’s façade functions as a transition space, as all four sides of this prism are open and accessible. It is a transparent volume, fully glazed like a big window towards the city and draped with a gigantic smooth and lightweight cover in metallic mesh. To convincingly create the effect of a net, the metallic mesh functions as a membrane. Its curves and counter curves, required for this static mesh, create a free, happy and lyrical architecture. Its brilliance, reflections and color clothe the architecture in a robe of light while also serving as a filter for sunlight a wind break and a shelter from rain. The metallic mesh itself consists of a flat metal wire wound along steel rods to create a spiral mesh, which can then be woven in limitless dimensions. Huge panels are fastened with clevises as well as inverted and adjustable steel plates onto a steel frame construction so the angle of each plate can follow the curve of the façade and position the fabric in parallel. In the case of Albi like in many other cases the use of the metallic mesh is a way to free the architect from physical ties, sweep away heaviness and design architecture as easy to build as to declare. 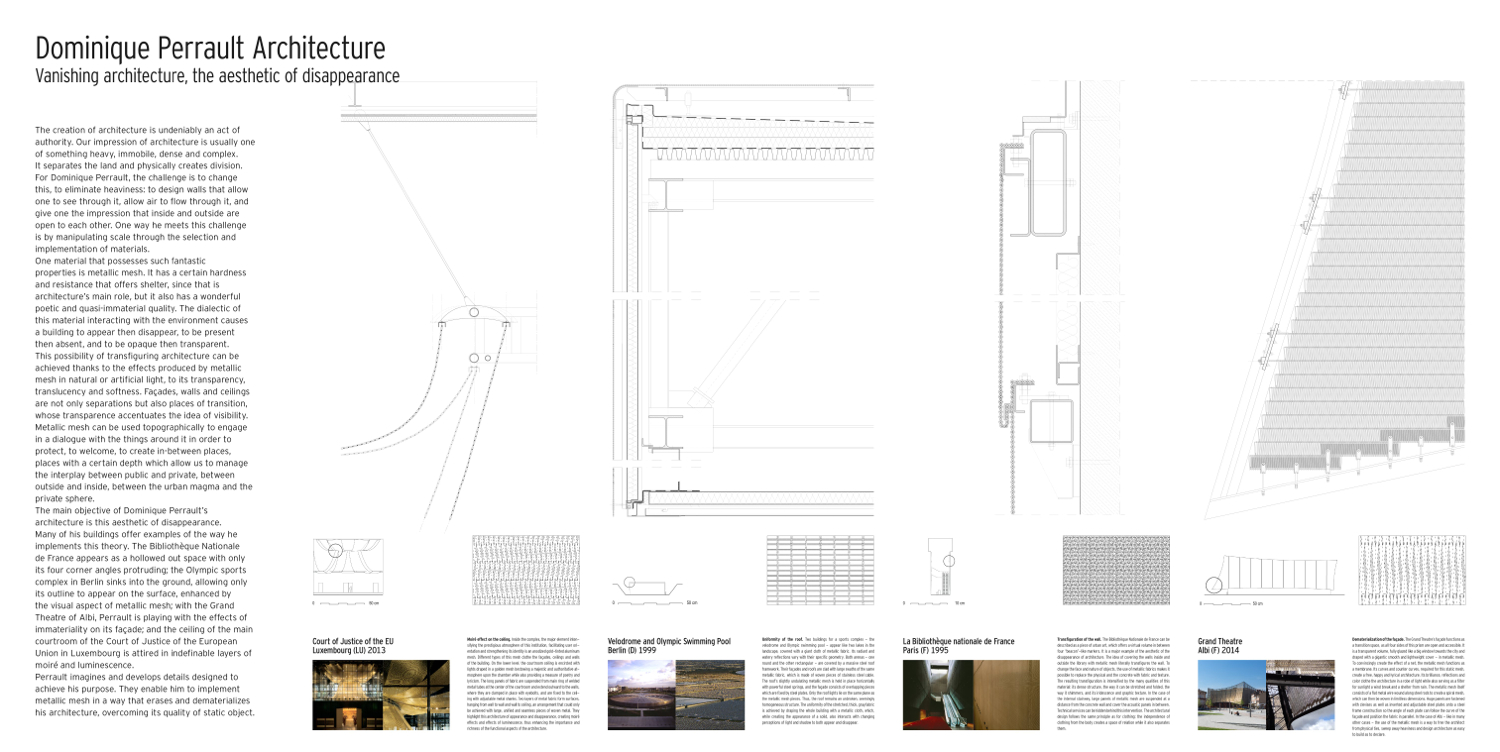