The project for the Borgo condominium in Contrà del Quartiere in Vicenza was approved by the city technical office on August 20th, 1975. The construction drawings, in scale 1:50, were drafted in the office of engineer Guiotto who also did some interior modifications of which Scarpa was unaware of. In 1978, when Scarpa died, the building was still unfinished although there are no doubts about the architect’s authorship for the design elements presented in this board.
The building ground floor has an arcade with reinforced concrete pillars and steel trusses with capitals. Above the steel beams the volume is divided with thin string courses. The windows are full height and arranged in a free manner without any vertical alignments, a device that helps to lighten the volume, creating a contrast between the massive structure below – materic and polychrome – and the diaphanous upper volume.
The history of the project documents how Scarpa defined the final solution introducing the reinforced concrete pillars supporting the steel trusses of the arcade.
When inserting the steel beam in the delicate facade, Scarpa disarticulates the compositional unity by giving a poetic interpretation to the general theme of the project, between technique and tectonics, structure and ornament. “A modern space which destroys the sense of members forming a structure, removes colour characteristics and does not use ornament and decoration as supportive element, what can this space refer to in order to gain architectural vivid values, alive and expressive ones?”
The steel beam with its strong technical and constructive reference indicates an adhesion to modernity but the building framework, used as structural fragment, becomes ornament which was considered the only real architectural support in the classical tradition.
We are grateful for the collaboration to the Archivio di Stato di Treviso, where the drawings of Carlo Scarpa are preserved.
Survey by Alice Zenere e Federica Boveri, Università IUAV di Venezia
Marco Pogacnik, Università IUAV di Venezia

The corner capital is fully perforated and emptied, reduced to thin blades, a device to materialize light and space. This is particularly clear looking at the corner capital of the northern facade towards the garden. The light penetrates the capital on the building side facing the sun, it filters through hidden internal paths to surface on the shadowy side, thus creating an effect of emptiness and suspension. At the crucial point where the beam stands and greater emphasis should have been given to the structure static, at that point Scarpa intervenes to suspend the heaviness, the sense of weight of the building mass.

The initial solution included a portico with paired columns and a compact upper volume with horizontal bands. Only later the street facade was opened with loggias on the first floor. Some colour drawings (among the most beautiful of the project) document the extensive compositional work developed by Scarpa to reach a convincing balance at the bottom edge of the building suspended volume. From that point the project is enhanced by a series of variations on the theme of the column: giant order on the central part of the street facade; paired columns, corner column and column next to a wall in the portico.

The column and the wall

In the portico Scarpa offers us an example of how a structural concept, that of the steel beam, can be transformed into a tectonic element. The beam is oversized in relation to the actual spans. There is a redundant number of pillars and the particular solution of the beam support is made as to decrease its section where indeed the shear stress is higher. The steel beam shape recalls those of reinforced concrete trusses used for bridges or viaducts. They are obvious technical breaches that refer to the expressive dimension of the architectural structure.
Carlo Scarpa, a study for the entrance, Archivio di Stato di Treviso, Centro Carlo Scarpa, segn. 75 150 41

The giant order
[Images only, see board] 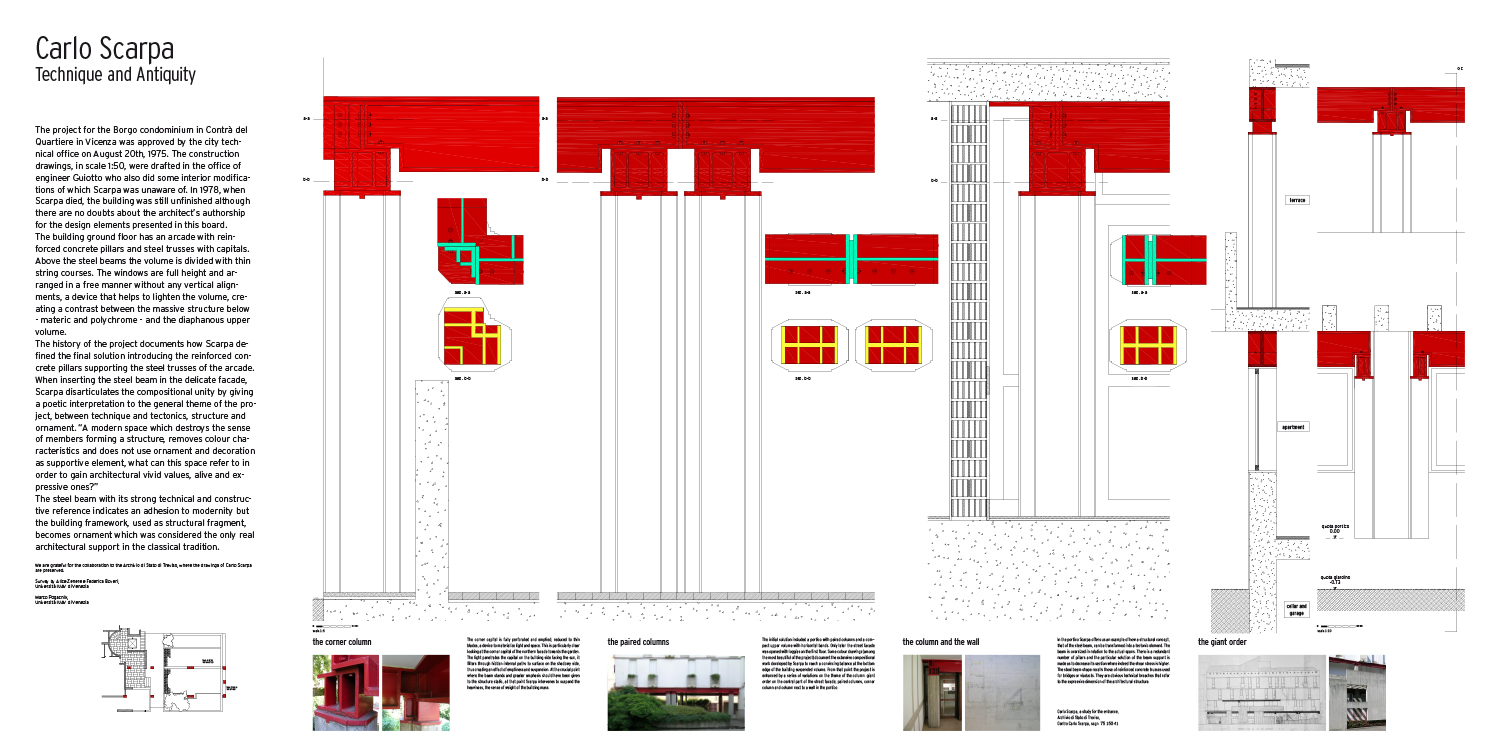