Haus Pircher 1986 This building rests atop an existing garage situated on the slope of a vineyard. Its two forms follow the garage’s stepped structure with each one built using a different construction system: one, a conventional post-and-beam construction; the other, a non-load bearing frame. The cross-section shows the rafter roofing, supported by the metal […]

This building rests atop an existing garage situated on the slope of a vineyard. Its two forms follow the garage’s stepped structure with each one built using a different construction system: one, a conventional post-and-beam construction; the other, a non-load bearing frame. The cross-section shows the rafter roofing, supported by the metal T-beam with round steel supports and the sandwich construction behind a solution typical of Arne Jakobsen in the 1950’s.

Again, the building volume is divided into two adjacent, shifted elements. Bedrooms are in the section on the slope, while the space to the south holds the residential wing and atelier. As with the Pircher building, we’ve faithfully adhered to modern 1930’s Swiss timber construction traditions (Paul Artaria, Emil Rot, Hans Fischli) whose detailing we’ve almost archeologically unearthed and emulated; modernistic compact volumes and windows aligned flush to the facade are juxtaposed with classic rafter roofing. The section illustrating the rear-ventilated atelier facade shows wide, cantilevered rafters. Rafters and roof elements are so strictly divided that one seems superimposed on the other. Multiple narrow rafters exaggerate this effect.

This modular system for four forestry facilities with three parts each (hallway, garage and locker room) can be assembled in different configurations according to location. This project signals a paradigm shift. The traditional rafter roof of the previous buildings has been replaced by a box-beam construction with integrated insulation. Abandoning the cantilevered rafter roof wholly eradicates classic facade-roof relationships and rejects this characteristic of timber constructions. Here, only the fine shadow of a 3-ply panel indicates the presence of a roof. The support structure’s outer planking has been replaced with weightless wind paper, an ecological advantage. The framework consists of exposed, rough sawn planks.

This project refers explicitly to Max Bill’s proposal for the Swiss Pavilion at the 1951 Venice Biennale. Two diagonally positioned volumes (one for a Kindergarten and one for an infant station with care facilities) separate two other zones; a single-story gym and an outdoor playground. The facade’s playful, seemingly arbitrary vertical and horizontal windows overlooking the playground call to mind a child‘s toy box while contradicting classic timber construction expectations as well. The facade consists of a ventilated, front and back planked frame construction; the roof structure is of heavy 16 cm thick laminated wood panel (BSP) with insulation.

The school’s defining architectural characteristic is the entrance hall’s sloping, elongated roof. Its compressed, wedge-shaped entrance (a sort-of lateral entryway) makes the one-and-a-half story hall appear bigger than it actually is. The solid construction has a rear-ventilated wood facade acting as a catch all balls backdrop for the playground it faces, and has a rafter roof analogous to the Pilcher and Brunner buildings’. These rafters however are cropped and define size and rhythm of the facade panels. 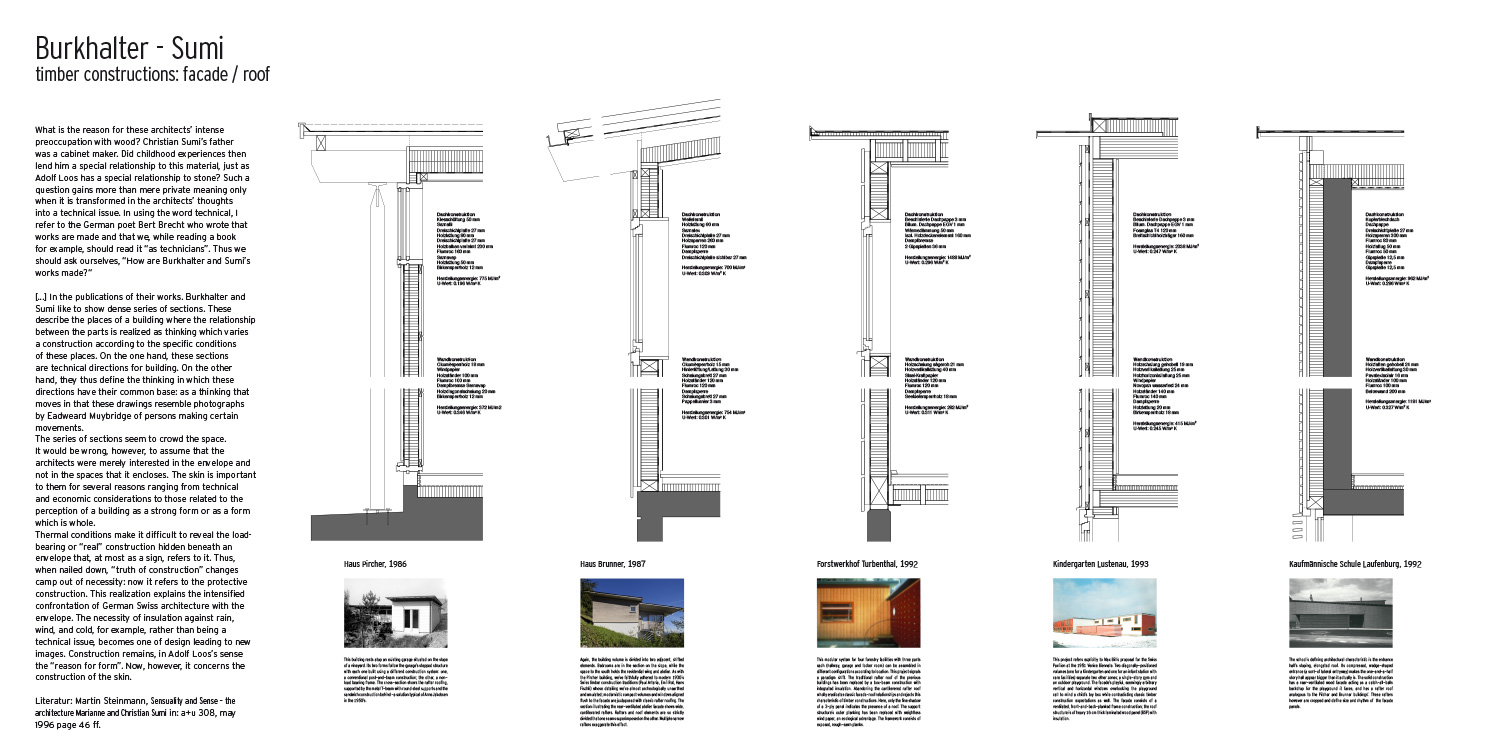