Detail in these examples is a means, an instrument, for fabricating façade systems whose primary goal is to produce visual affect. A façade is a primary contemporary site (within the larger site of a building) for architecture where, arguably, the architect has the greatest freedom to determine a building’s technical/ environmental performance, iconographic image, aesthetics, material character, and form. A façade is the liminal threshold between an interior (private or public) and a building’s exterior that requires the utmost scrutiny in determining what it should do.
The section drawing favors (indicates) a relationship to our bodies and also shows shape of space as a priority. These examples show façades drawn in section as a spatial condition that generates dimensional depth as a kind of tectonic poché. This is a depth that is utilitarian (space for sun screens, mechanical systems, blinds, heating elements etc.), spatial and optical (controlling how surface is seen frontally and obliquely). These are flat surface depths (between 20 cm and 120 cm) that produce in all cases strong visual affect. Repetitive geometric patterning, including hyperbolic surfaces, stacked, or facetted elements generate deep textured façades, visually dynamic.
This locates the detail not as a fetish of precision or formal compositional beauty à la Mies per se, rather, the detail is instrumental, in its aggregate repetition for producing visual/ optical effect. The visual aspect is one that is activated by change/ movement. This movement animation is activated by the body moving in relation to a (normatively) fixed building, but also in these examples by light and environmental changes moving over reflective glass, or moving (kinetic) walls of fabric that change shape physically.
These examples both materialize as loadbearing walls or dematerialize as curtain walls.
The façade section is positioned ideally to illustrate the logic of how and where material systems intertwine and intersect, the scale and depth of surface, and the actions of mechanical systems. These are matter-of-fact drawings that help determine construction and material interfaces.
The sectional drawings here are projected so that the section is combined with an oblique elevation so that the objective might combine with the visual hinting at the phenomenal and experiential that only buildings themselves can convey ultimately.

An office/showroom midrise in a tech park in Seoul, the Trutec Building is wrapped in a faceted curtain wall of low reflective glass. Using CNC technology to cut off the shelf aluminium façade profiles an origami like surface is generated in a 20 cm depth. This kaleidoscope affect is hypersensitive and reacts to changing weather, traffic, pedestrians, or neighbouring LED advertising at night. Recalling imperfections in the reflective glass office buildings of the 60’s and 70’s, e.g. Hancock Building Boston, this visual affect reacts to and binds the new building in an emerging context. A simple module of 3d and 2d panels generates a complex pleated façade.

An office building for the French energy company Total is structured with a load-bearing “raster” or frame façade of precast concrete elements generating a cloak like geometry. The façade is both a quote of historical Berlin facades and a subversion of them by generating this visual dynamic. Individual concrete elements are T-shaped with a folded K-shaped geometry, which aggregate with an offset emphasizing a diagonal pattern. Glazing is located at the back of the concrete façade elements in deep pockets allowing room for exterior sunshades. The facades change dramatically in appearance based on point of view and changes in light (frontally or oblique).

This curtain wall façade is constructed entirely of glass. A double façade of float glass is infilled with a gradient of acrylic stacked tubes (from small to large). The tubes are both ornamental and performative as sunscreens. An additional fabric sunscreen is pocketed in the floor. As the vertical façade mullions are also of (laminated) acrylic, the visual effect is of a blurred surface that is either transparent or translucent depending on viewpoint. This affect is enhanced at night when the façade is backlit. The delicate/brittle façade is protected by a rubber gasket detail at the head, which moves under load and protects the façade from the dynamic movement of the steel cantilevered roof above it.

This prototype for the 14th Venice Biennale, Fundamentals: Elements of Architecture, (Walls) revisits two historical (modernist) projects, kinetic architecture (moving buildings) and the space frame. A “kinetic” fabric is attached to a wood gridded space frame. The depth of the wall (space frame) is such that the wall is self-supporting and able to house a series of motors, activating telescoping rods that extend and retract the fabrics forward and backward. The fabric surfaces become a hyperbolic topography of valleys and peaks. This animated section is experienced physically by walking through the corridor it forms with an adjacent neighbouring wall by wrapping around visitors. 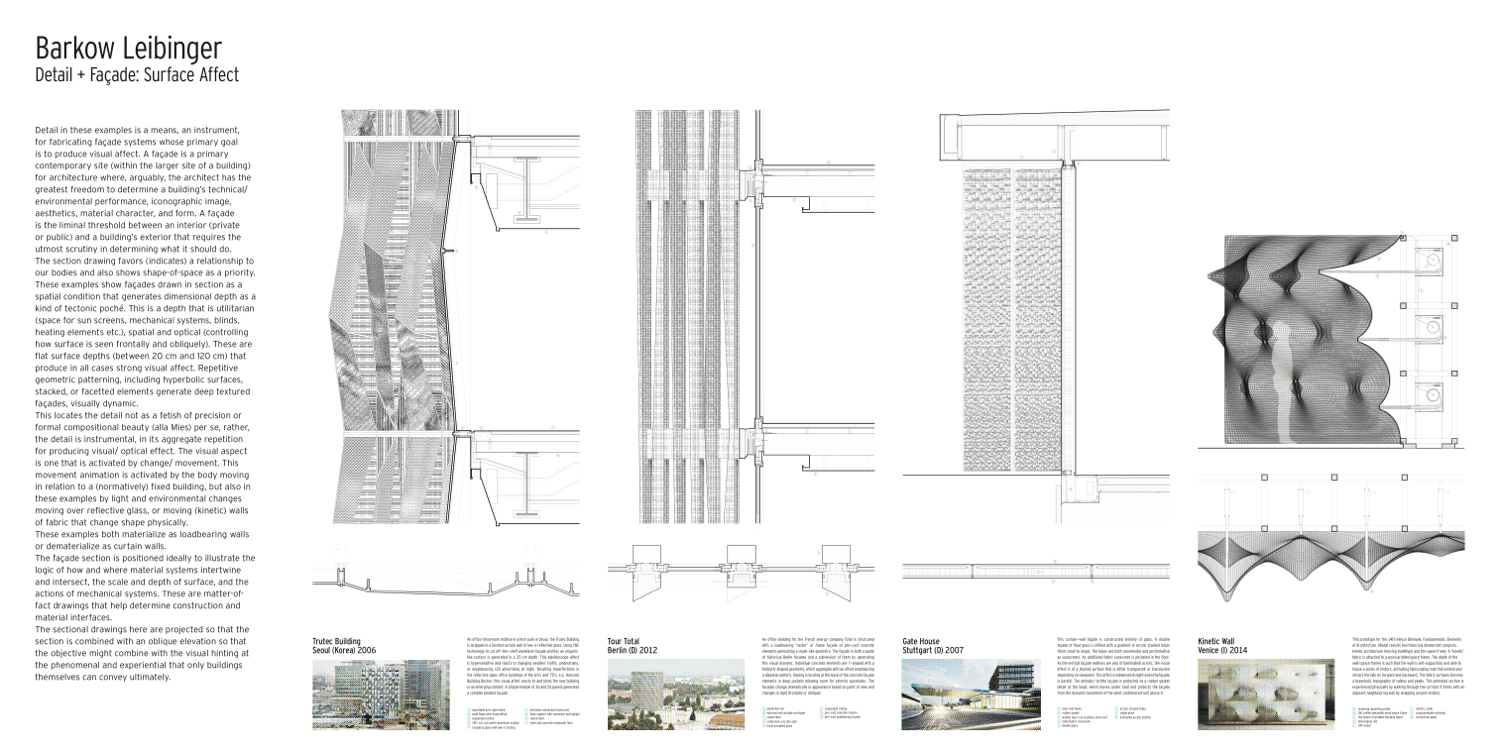