The contour of the space
Architecture is three-dimensional thought accompanied with craftsmanship. The craft of architecture is revealed in the detail.
The detail can be described as the transition from one surface condition to another. In the fine arts, painting is, for example, concerned with the surface, and the drawing with the detail or, to be more precise, with the fault-lines between the surfaces. The articulation of the details defines the structure of the surface of a form.
A specific way of articulating the details is a prerequisite to the distinguishability of designer and building in a homogenized world.
The arbitrary applicability of the most diverse of formal conceptions, which are available everywhere and to everyone today through the possibilities of information processing, makes a new Classicism conceivable. Next to devising space, the detail, in combination with the structure, continues to be a means to authentic architecture.

The vast land, industrialized agriculture, villages straddling the thoroughfares, in proximity to Vienna, have been annexed by suburban sprawl.
Situated amidst it, a small woods, in it a farmhouse, as well as its diverse shaggy fields. Zita Kern farms the land, and she is also a scholar of literary studies. There are spaces for farm work, for cooking, eating, and sleeping. A bathroom and a study are lacking.
The structure of the existing buildings sets the framework: the old stockroom becomes the introverted, large bathroom; by removing a few beams daylight is brought in from above. The cowshed is freed from stucco and will continue to serve the farm; its surfaces will be built upon. The volume takes on form in response to existing conditions: by opening towards the terrace, creating access without encroaching upon the original substance, and by directing the figure toward the smaller chicken coop.

Southern Burgenland possesses a gently rolling landscape, and its villages are few and far between.
The property for this weekend retreat for two Viennese, with a magnificent southwesterly view beyond the sloping hillside, extends from a sparsely traveled road over the knoll of a ridge.
The amount of space stipulated was modest: one large room for the owners, and another half its size for guest. The space in between the units, separated by a buffer zone, can be annexed or closed off. Enclosure and spaciousness give rise to the terrace: two level surfaces with identical dimensions constitute the space’s floor and lid. The terraces provide outdoor spaces which are sheltered from the elements, hovering above the sloping meadow.
The spaces with a view are glazed to the southwest. The side facing the street is perforated by openings, the height determined by the respective functions.

Multi-generational living at Mühlgrund
Vienna (A) 2011

In response to the setting of elevated tracks north and a rural fabric to the south, a new version of balcony-access apartment house with stairway and elevators on the two ends of the building is developed: a vertically kinked skin directs and diffuses the light, and toward the top, combined with a metal wall perforated with window openings and the elevation facing the rapid-transit line.
This creates a hall with distinctive characteristics: long, narrow and high, with varying incidence of light and a variety of spatial experiences.
A cascade stair in the narrow zone between the corridor and the metal wall leads from the main entrance on the west side, through the building, to the top level. In between is a vertical garden.
The entrances to the flats are recessed, doubling the width of the corridor. Windows between the apartments and the hall provide daylight and views to the internal garden.

The Town Musicians of Bremen
Vienna (A) 2009

Analogous to the Grimm Brothers’ fairy tale The Town Musicians of Bremen (whose main characters are a donkey, a dog, a cat, and a rooster), this reinterpretation of terrace houses involves stacking different apartment types atop one another.
Dwelling types normally considered suburban, with the accompanying outdoor spaces, are stacked atop one another to achieve an urban bundle with high density, facing an open courtyard: on the very bottom of the stack, the units each have an open floor plan with a gallery at the back and a garden in front; on the next level, maisonettes face on to an atrium courtyard; next there are 2-story row houses with terraces; and at the top allotment garden houses are separated by courtyards.
Flats with double-story loggias (“Casablanca” typology), elevated along Tokiostrasse, complete the stock. 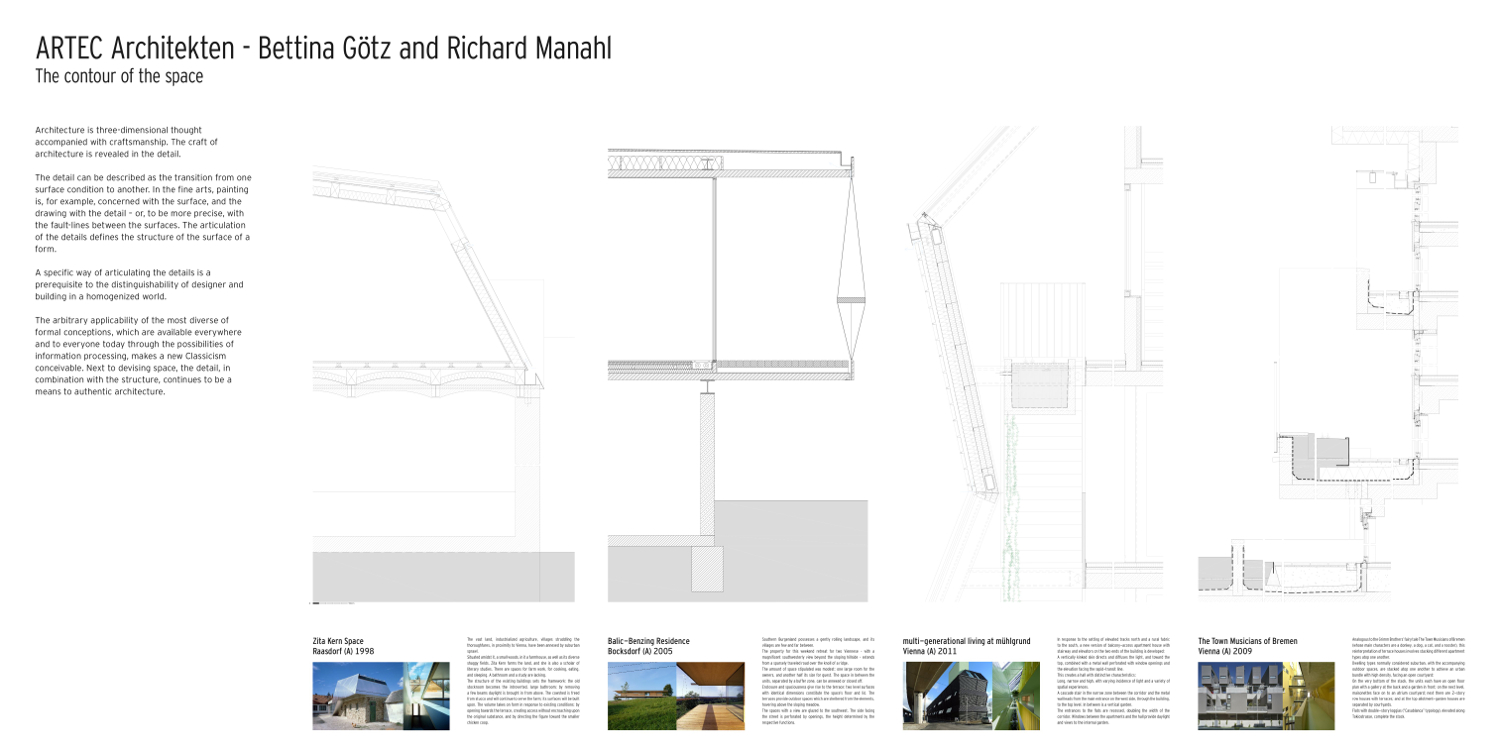