We are interested in elements that are set in relationship to one another: pedestrian distance, landscape, materials and cultural references.
Construction time should matter less than the final building’s ability to last; its form and presence should matter more than the “idea” or symbolic content by which it justifies its existence; the finished building must be more convincing and reveal more of itself than any rendered narrative.
There is a demand and there is a market for quality architecture that does not have to be fostered by a celebrity building. There is an architecture that truly transforms the urban context, adapting to the local morphology rather than landing from out of nowhere and causing the surrounding areas to wither.
Site, context, building traditions, materials, climate or views are all elements of this way of making architecture, an approach rooted in the value of things and a sense of what is real.

In the HafenCity of Hamburg, the largest transformation of a historical port in Europe, the Brooktorkai 22 building combines residential, commercial and office functions at a favorable location, in two separate volumes that share a glazed ground floor which contains a restaurant, a bar and the separate entrance lobbies for the offices and the apartments.
The two portions of the project face the city with two autonomous facades, joined by the glazed ribbon of the ground floor and the chromatic coordination of the facing materials, which convey an elegant, welcoming image. The severe look of the tall residential volume, with its large sheets of sandstone in an irregular pattern, and the dark reddish clinker of the horizontal facade of the office building have the shared feature of the bronze-tone sections of the windows and glazing. The upper level of the office building is made lighter by the continuous glazing that echoes, with the vertical pacing of its sections, the alignment of the windows of the other floors and the glazed ground floor, facing the Brooktorkai, where a portico turns onto the Poggenmühle and joins the two volumes, then terminating under the residential tower.

The intervention focused on the enhancement and reinforcement of the monumental character of the existing structure of the former Italian Post Office HQ in Milan, converted into a contemporary business centre.
The project, besides making optimal use of internal and external spaces, calls for the creation of a new skyline for the entire complex; the rich volumetric articulation of the historic building and its forceful spatial configuration form the starting point for the idea of an architectural project that would make both the real volume and the virtual volume visible and tangible. A clean, simple, autonomous project, but also one capable of establishing a dialogue with and emphasizing the architectural lines and principles of the existing historic building.
Through the geometric precision of the added profiles and the steel web that covers it, the new volume of the project is defined in a clear, contemporary manner, becoming a suspended, light, technological element over the original eaves of the building.

The intervention envisioned the conversion of an existing office building into residential use. The total reconfiguration of the volumes of the site has been made possible by the autonomous character of the construction, which is now an isolated building inside an enclosed garden, with walls along the street, and bordered by a transparent enclosure toward the greenery, permitting the residents to perceive it as a single green zone continuous with the adjacent Solari park.
The aim is to offer a building with an absolutely contemporary language that expresses its residential character through the apparently random composition of the decorated glass panels and the presence of the white fabric behind the glass, while at the same time offering elegant decorum in its use, thanks to the privacy provided by the setbacks in the facades and the protective screening.

This project substitutes an existing industrial shed, impossible to be preserved because of the complexity of its structures, with a completely different space which, with its two buried levels of parking lots, takes up the previous disposition of volumes. The brand new building, even if reproducing the profile of a shed roofing, gives a fresh interpretation of internal space organisation.
All the functional spaces develop around an inside court terrace which corresponds to the covering of the theatre and gives an inside overlooking to the different activities.
The external front of the building comes out to be a very closed one. Only partly glazed and treated with reflecting materials, this facade exploits the inclined plane shapes to reflect the surrounding industrial scenery, creating, this way, a strong effect of abstraction of new building outline. 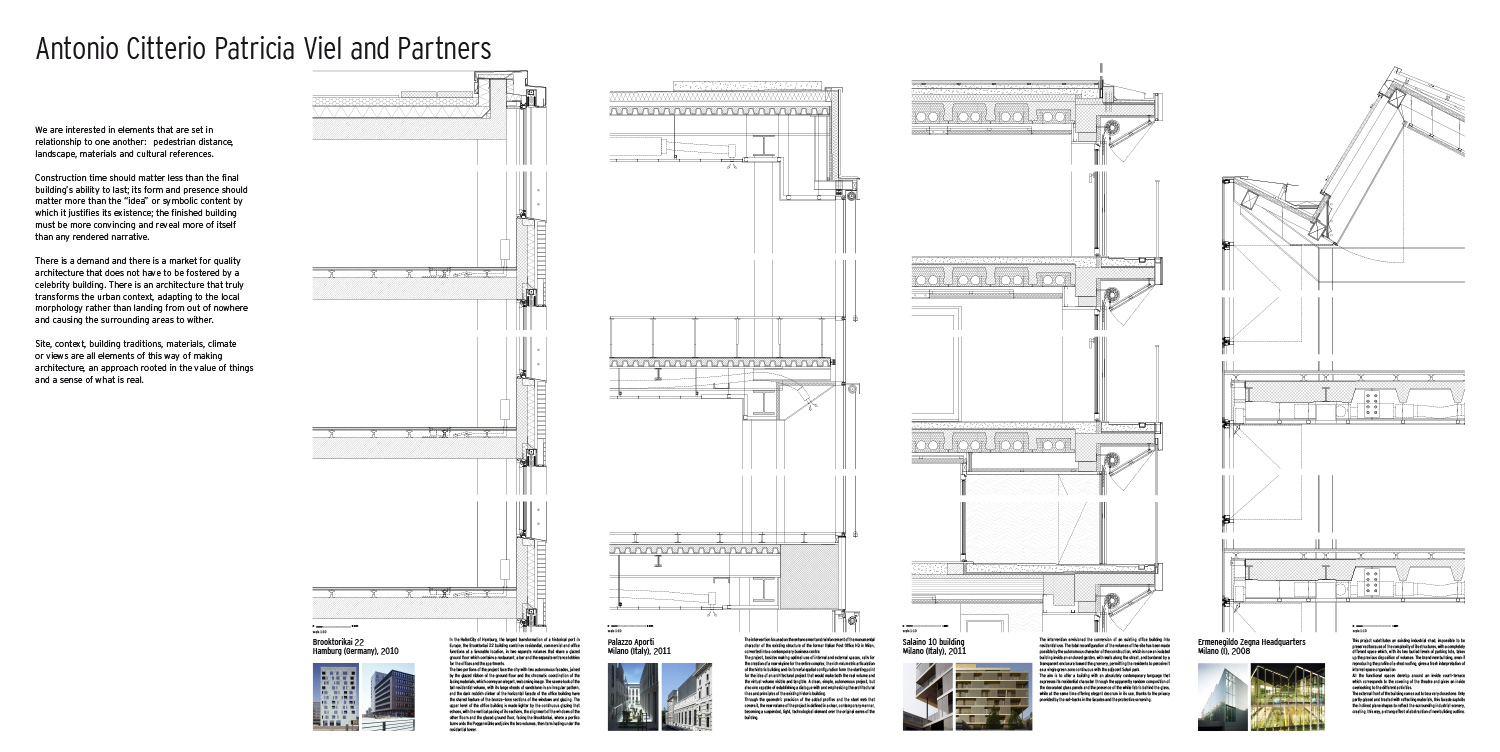